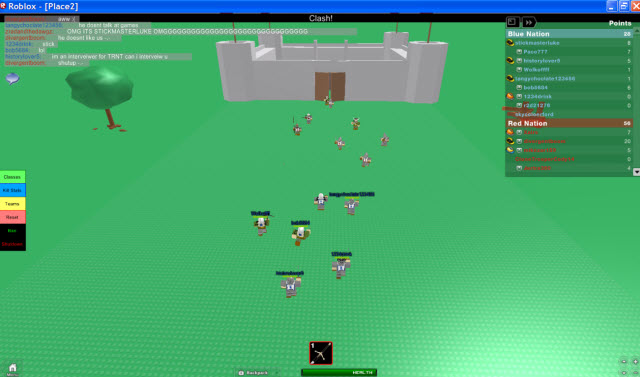 Roblox is a thriving web-based virtual world where kids can create building-block creations in Leg0-like styles. It is far more successful than other virtual worlds, and 18-year-old Luke “Stickmaster Luke” Weber is one of the reasons for that. 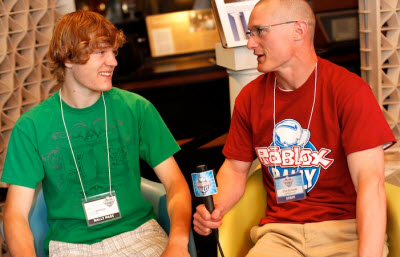 For the past four years, Weber has been making games within the world of Roblox. Those games have been played more than 10 million times on the Roblox site, making Weber (pictured left) into a celebrity within the Roblox community of virtual tinkerers.

With Roblox, kids are architects of their own games and they learn software coding abilities that can help them later in life. Roblox uses physics to simulate a virtual world, allowing kids to construct things in building-block style. While the games aren’t graphically outstanding, they do remind everyone that a game doesn’t have to have high-end graphics to be fun. And Weber has proven to be a master at this art.

“Roblox is like a building game,” Weber said in an interview. “I started playing because I was always playing with Legos when I was younger.”

Weber, who took the “Stickmaster Luke” nickname from his early start making stick-characters animations in Roblox, hasn’t made any money from the free games. But he has picked up some skills on how to make games that could serve him well in the years ahead. And earlier this month, Weber attended the first-ever Roblox community gathering, the Roblox Rally, which was attended by more than 1,000 people at the Exploratorium in San Francisco. Lots of kids came up to meet Weber, who just graduated from high school in Pleasant Hill, Calif. 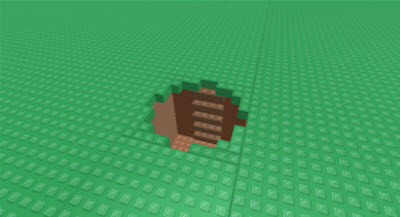 The success of Weber’s simple do-it-yourself games is one reason that Roblox is thriving. The company has 6.8 million unique visitors a month, with a total of 942 million page views a month.That has made Roblox into the second-most popular kids entertainment site, and it has enabled Roblox to raise $4 million in funding from Altos Ventures and First Round Capital. Roblox makes money from premium subscriptions, sales of in-game virtual currency, advertising and prepaid cards sold at retail outlets such as Best Buy, GameStop and Wal-Mart. Revenue at the company is up 75 percent from a year ago.

Roblox users build games by resizing virtual bricks to build scenes and characters in the Lua programming language. Then they add scripts other coding for games. The process is relatively simple and it’s a good way to learn programming. Rival game worlds include Second Life and Minecraft. All of these worlds are part of what futurist Paul Saffo calls the “creator economy,” where users aren’t satisfied with passive entertainment and want to create their own.

“I was a complete beginner when I started,” Weber said. “I made quite a few games and most of them were bad. My first hit was one that allowed players to build in real-time with each other and then fight.”

Four years ago, it was a big deal if 60 players played a game at once, but now the audience is measured in thousands. Weber copied some other games to see if he could do them better. Then he got more experimental, making games where trucks fall down a hill and you have to dodge them in order to climb to the top. Weber is pouring increasing amounts of time into each game, though only gets half-way through many games. Each full game takes about 24 hours of work to complete. 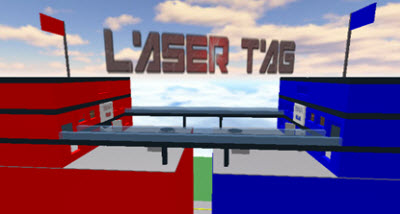 Now Weber’s “The Underground War,” (pictured above) where players dig under the ground, has crossed 4.1 million plays. A handful of other Stickermaster Luke titles have also crossed a million plays. One of his newest games is Laser Tag, pictured right. Weber has started work on around 97 different places in Roblox, but about 30 have turned into finished games.

While Weber isn’t making money from his games, he does earn in-game currency every time someone plays a game. And Weber sells virtual T-shirts for 30 “Robucks.” Making money would be nice, but Weber says, “Making games is fun. There’s some hype and notoriety in it, and it’s fun meeting new people.”

As for the future, Weber plans on going to community college.

“I feel like I can do anything now,” he said.