Roblox has thrived as a Lego-like virtual world because its members have created games that everyone wants to play. So the company behind it is giving back to those creators by creating a Developer Exchange program where it pays the game creators for making popular titles within the Roblox community.

The payments are the latest evolution of what Silicon Valley futurist Paul Saffo calls the “creator economy,” where users move beyond consumption to creation.

It makes sense to reward the game creators because they generate the engagement that keeps players coming back to the community. And the company is announcing today that it has hit a milestone, with the first $10,000 monthly check going to two 18-year-olds — Conor and Darragh Griffin of Limerick, Ireland, who go by the name TheGamer101 and created a popular tournament game dubbed Sword Fighting Tournament.

San Francisco-based Roblox Corporation started the developer-payment program in the fall, and the brothers have earned $19,000 to date. Altogether, Roblox has paid more than $175,000 to 424 budding game developers in its world.

The Griffins released Sword Fighting Tournament in October 2009, and it has been played more than 25 million times. When the game gets played, the creators receive virtual currency. The Roblox Developer Exchange program enables them to exchange their virtual currency for real cash, said David Baszucki, the chief executive of Roblox, in an interview with GamesBeat. Roblox gives out 20 cents for every 100 Robucks, or virtual currency from the game.

“This is a neat way to help developers get compensated for their work,” he said.

“The Developer Exchange program has made Roblox more than just a hobby for us,” the Griffins said in a statement. “We used to just do it for fun, but the Developer Exchange program means that all the time we have spent working on our games on Roblox will actually help us pay for our education. We are grateful for the opportunity to make Roblox a real job and are looking forward to creating more games on the platform in the future.”

Developers from the U.S., Ireland, Sweden, Canada, the Netherlands, Australia, Lithuania, and elsewhere have used Roblox to create and publish some of the most popular games in an online marketplace. Out of the 15 million-plus games created on Roblox’s platform, some of those mainstream titles include Murder Mystery, Skybound, and Paintball! — each of which has earned millions of plays and thousands of dollars for their creators.

“It’s a real economy, and the size of it is growing,” Baszucki said. “Some of these kids will make more money than their parents.” 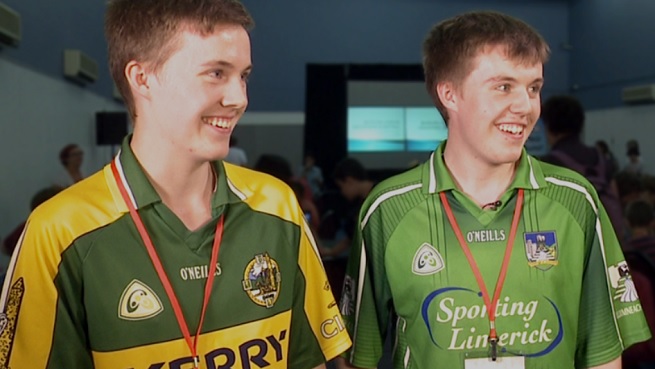 Above: Conor and Darragh Griffin