There are 247 game companies that reap more than $1 million in revenue from mobile games in the U.S. alone. That should be a reassurance to small indie game makers who are striving to compete amid a sea of rivals.

But big mobile-game publishers like King, Supercell, and Kabam are strengthening their grip on the top-10 grossing ranks in most countries, according to a report by market researcher Newzoo.

Newzoo said that Candy Crush Saga, which accounted for 79 percent of King’s revenues in the fourth quarter, isn’t being cannibalized by King’s newer titles. Candy Crush’s revenues continue to rise even while other King games generate millions in revenues. About 48 percent of Candy Crush players also played at least one of King’s other mobile titles in the past few months.

That suggests that King’s strategy of methodically launching numerous social-mobile titles that can feed off each other is working. The PC is still the No. 1 platform for King’s 300-plus games as the company releases its games first on the desktop and then adapts them for mobile.

Farm Heroes Saga is King’s second most popular title, taking sixth place on a global basis on iOS in the top-grossing ranks and seventh place on Google Play. If the game continues to perform well, it could add another $250 million in revenues for King this year. About 53 percent of Farm Heroes players also play Candy Crush.

Meanwhile, Supercell’s Boom Beach is expected to join the top-10 grossing list in many countries in Newzoo’s next monthly report. Supercell already has Clash of Clans and Hay Day in the top 10. Boom Beach is already generating $500,000 in revenues a day.

It’s still possible to get new titles into the top ranks. One newcomer is Empire: Four Kingdoms, created by German publisher Goodgame Studios. That title got into the top 10 list in most European countries last month on both iOS and Google Play. It is an example of a successful mid-core title, or one that is hardcore in style but can be played for minutes at a time. 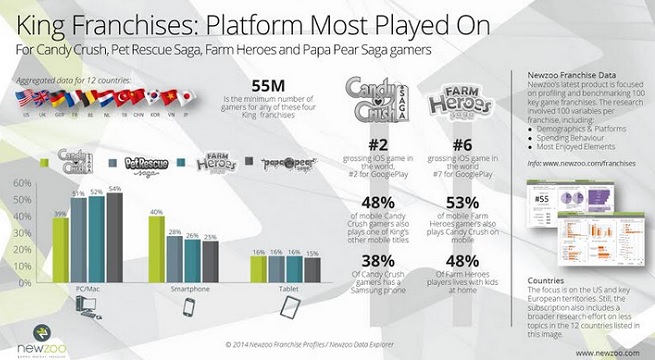 Above: Newzoo on King