Nintendo’s famous portable is 25 years old today. The handheld would see numerous successors, peripherals, and notable games during its 15 years of dominance before the Nintendo DS would take over as the new brand for the Japanese gaming giant’s portable endeavors.

Below is a timeline that includes all of the Game Boy’s major milestones. Note that with the exception of the Japanese launch, all of these dates correlate with U.S. releases. Enjoy your nostalgic trip through handheld history, and check out our community prompt if you want to write about the Game Boy yourself! 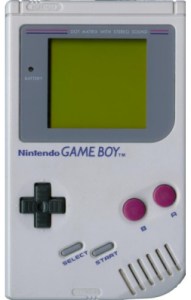 Above: The original Game Boy.

The original Game Boy was the brainchild of Nintendo’s Gunpei Yokoi, who had previously produced the innovative Metroid action-platformer for the Nintendo Entertainment System. The Game Boy was an 8-bit handheld console that supported interchangeable cartridges, although its screen could only display games in four colors of gray.

Super Mario Land, a 2D sidescroller similar to Super Mario Bros. on the Nintendo Entertainment System, was the most notable launch game.

While the U.S. launch also got Super Mario Land, the puzzle game Tetris made the biggest impact. Nintendo bundled it with the system. With 35 million copies sold, it was the best-selling Game Boy game.

While most of Nintendo’s notable franchises, like Mario and Zelda, established themselves on home consoles and later showed up on the Game Boy, the Kirby series debuted on the handheld. The next game in the long-lived series comes out May 2: Kirby Triple Deluxe for the Nintendo 3DS handheld.

The Super Game Boy was a cartridge for the Super Nintendo home console that had a slot for Game Boy games — with it, you could play Game Boy titles on a TV. Certain games, like the Game Boy version of Donkey Kong, would receive color and other enhancements when you played it on the Super Game Boy.

The Virtual Boy was a handheld system that Yokoi also created. It simulated a 3D view of games but could only display them in black and red. Unlike the Game Boy, it was a massive flop. 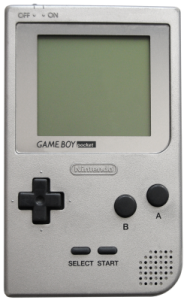 Above: The Game Boy Pocket.

The Game Boy Pocket was a slimmer version of the original Game Boy with the same hardware specs.

A traffic accident kills the father of the Game Boy.

Pokémon was a role-playing game that tasked players with capturing, training, and fighting 151 different pocket monsters. It launched a media franchise that included a popular card game and anime.

Today, it’s still one of Nintendo’s biggest properties, and at least one new generation of Pokémon games releases on every Nintendo handheld system. These games are always among the best-selling for their respective systems. 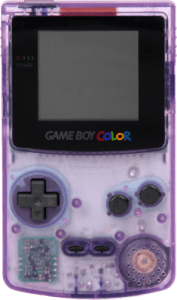 Above: The Game Boy Color.

The Game Boy Color was the first true successor to the original Game Boy. As the name implies, it could support up to 56 colors.

While the original Game Boy dominated the portable market for almost 10 years before getting a proper upgrade, Nintendo would replace the Game Boy Color in less than three years.

The Game Boy Advance was the follow-up to the Game Boy Color and featured graphics similar to the Super Nintendo. 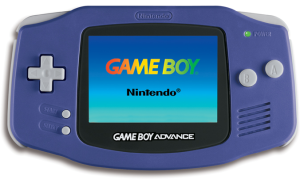 Above: The Game Boy Advance.

It was backward compatible with Game Boy and Game Boy Color games.

The e-Reader was a peripheral for the Game Boy Advance that could read data from cards. This data turned into additional content for Game Boy Advance games and full versions of original Nintendo Entertainment System games. 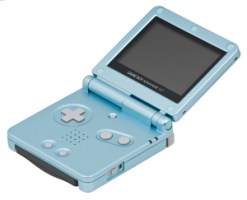 Above: The Game Boy Advance SP.

The SP was a new model of the Game Boy Advance that featured a back-lit screen. It also introduced a clamshell-like design that most Nintendo handhelds have adopted since.

The Game Boy Player was an add-on that attached to the bottom of the GameCube console. It could play Game Boy, Game Boy Color, and Game Boy Advance games. 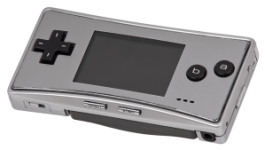 Above: The Game Boy Micro.

The Micro was a redesigned version of the Game Boy Advance that dropped a few features, notably backward compatibility with original Game Boy and Game Boy Color games, in order to be as small as possible. Released a year after the Nintendo DS, the successful portable system that replaced the Game Boy brand, this was the last iteration of the Game Boy Nintendo would release.

Nintendo originally created the Virtual Console for the Wii so people could buy, download, and play classic Nintendo games. The Nintendo 3DS portable includes a version of the digital store that sells Game Boy and Game Boy Color games. Game Boy Advance games would also become available, but only for those who bought the Nintendo 3DS at launch.