If you’re a gaming app developer, you’ve likely had concerns about ad monetization. Can ads negatively impact a user’s experience? Or disrupt the in-game economy by cannibalizing in-app purchases (IAP)?

“One-hit wonder” apps are becoming ever more scarce, user acquisition costs are rising, and studios are having to invest more budget than ever before into their IPs to make them a success. As a result, developers need to think more strategically about creating sustainable business strategies that foster long-term engagement and retention in a way that doesn’t negatively impact user experience or revenue.

Ads don’t need to be an annoying “tack-on” feature. If executed in a meaningful manner, they can actually stimulate IAP and function as an appealing and engaging feature of the app. But of course, when it comes to developing a winning integration, a thoughtful implementation is paramount.

To do so, developers should consider monetization from the outset because it’s during the design phase that they have the most control over their in-game economy. Understanding from the start exactly how ads will function as a feature of the app and how they can complement other sources of revenue, ensures that the ad integration will truly fit the user experience and won’t feel like an add-on.

Here are the 3 must-do’s if you’re going to maximize the impact of ads and use them to up your monetization game.

1. Engage and delight the user through deep ad integration that’s built into the gameplay

Now let’s unpack those a bit.

Next Games takes the prize

Next Games, who partnered with Fyber to mediate and manage the ad monetization strategy of its top-grossing title, Compass Point: West, is a great example of how to create a user experience that naturally complements the gameplay of the app. Rather than interrupting users with an intrusive pop-up or requiring them to “dig” for ads through a complicated menu, they invested in a “deep” integration of ads — one that was designed to match the look and feel and go hand-in-hand with the app’s gameplay. 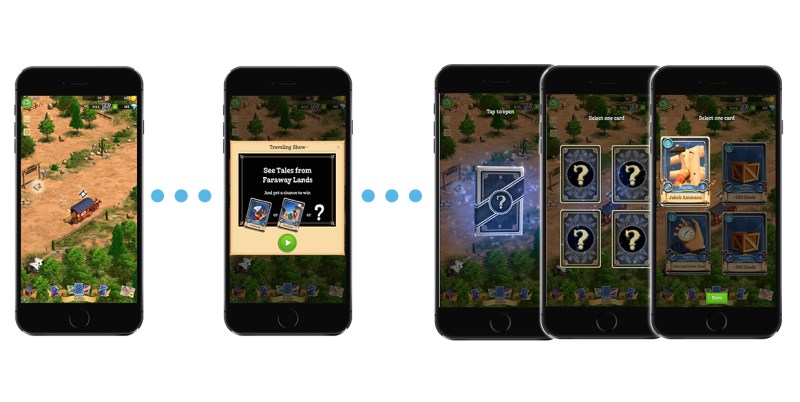 Above: 1. “Traveling Show” wagon appears when a user can access rewarded ads (up to three times every eight hours). 2. User is prompted to watch video. 3. After completing video, user can select one of four mystery cards.

To align with the game’s card collection mechanic, users are allowed to pick one card from a mystery deck of four in exchange for watching a video ad. After making a selection, the three remaining cards are revealed so that the player can see which ones they missed. Not only are users encouraged to re-engage by showing the cards they didn’t choose, they are also directed to this spot within the game on a daily basis, and given an extra bonus for returning.

Next Games saw approximately 60 percent of DAU (daily active users) engage with at least one ad per day, and about 10 percent of users leave a positive App Store review specifically calling out video ads. In addition, users who engaged with ads completed an average of 4-5 videos per day. As a result, Next Games was ultimately able to attribute 40 percent of their overall revenues for Compass Point: West to its successful ad integration.

While ads can clearly offer a significant revenue stream for developers, the fear of IAP cannibalization remains. Research has shown that in-app ads, when executed in a contextually relevant manner, are more likely to encourage than cannibalize IAP. In fact, a recent case study published by Fyber found that for a leading international publisher of mobile and social games, players who engaged with ads were more than twice as likely to make an in-app purchase and stay active in the game, and demonstrated up to a 100 percent boost in IAP spend.

Timing is also key for developers looking to boost their ad revenues. Ad budgets tend to be heavily weighted towards the end of the year to align with the holidays, so developers also benefit from increased payouts due to heightened competition. Last year, Fyber noted that top app developers’ average eCPMs significantly increased between Q3 and Q4 2014, with ARPDAU (average revenue per daily active user) in turn boosting an impressive 61 percent.

For developers considering ad monetization for the first time, there is certainly no time like the present. With a truly integrated and interactive experience for ad monetization, they’ll be able to monetize during the peak of their app popularity and from the very start rather than missing out on opportunities, users, and most of all revenue.