Disclaimer: Seanbaby is a personal friend of mine, hence this objective, completely nonsensical article.

A lot of people know him as the guy who ruthlessly mocks bad video games or, well, pretty much anything that he considers dumb. That may soon include most of his customers.

Sean “Seanbaby” Reiley is a comedy writer, probably best known for his work on Cracked and video-game magazine EGM (he’s currently with Break.com). You can now call him a video game designer, too. His new iOS strategy game, Calculords, just hit the iTunes App Store in February and already has scores of gamers experiencing mental performance anxiety (including this writer).

In Calculords, you collect cards that represent commandos, high-tech tanks, alien soldiers, and other futuristic military units and deploy them to destroy an enemy base … via math. Simple addition, subtraction, and multiplication — but math, nonetheless. You know — that thing that most of us have long abandoned the instant we got out of school and didn’t care about grades anymore? Yeah, that stuff.

But the Cosmo Knight kicks ass and the SMC Grunt is a lame starter card. So we must work that long-dormant part of our brains to feel really empowered in Seanbaby’s game. And yeah, sometimes it makes us feel dumb.

Let’s see how he likes it when he goes through a special math-problem: the 1980s edition of our 5 Hit Points challenge.

Question 1: Similar to Calculords, using only addition, subtraction, and multiplication, how do you get to 66 using the following six numbers?

Seanbaby: This might be more of a trivia question than a math question. Let me verify the numbers first. I know that Road Warrior guy lost four fingers because he wouldn’t have gotten such a big laugh if he only lost three. I know it’s three bottles in The Warriors because I’ve seen that movie 333 times. I also know only one man leaves Thunderdome because I’m not culturally illiterate, and I have been training for it since I was a second-degree yellow belt at age 8. And in Aliens, they were on LV-426 because 426 spells HAM on a touch-tone phone, and I have a fat woman phone-sex fetish.

GamesBeat: Correct. You still have 5 hit points, though we cannot confirm your times.

Question 2: How many total VHS tapes would you need to give each American Ninja an entire set of every Death Wish movie ever made?

Seanbaby: There were five American Ninja movies because we live in a country unafraid of far too many ninjas. And there were five Death Wish movies because Charles Bronson had the worst agent in Hollywood. So you’d just need 25 VHS tapes and five ninjas with enough free time to watch them. Which is easy to find when all your bosses and girlfriends are dead.

Question 3: If Jean-Claude Van Damme does an average of 1.7 splits per movie, how many total splits would he have done over his acting career so far?

Seanbaby: This is a tough question. When you consider he was once a time-traveling policeman, and how in any movie he has a 14.3 percent chance of being a second version of himself, you have some very wobbly data. Plus, do you count his role as “Gay Karate Man” in Monaco Forever? To me, that name counts as the splits. And in No Retreat, No Surrender, his character never did anything that wasn’t the splits. So I say 90, but with a +/- of 10 due to TimeCrime or Secret Twin Brother.

GamesBeat: Uh, OK, sure, we’ll give that one to you. Still 5 hit points. You’re doing very well! 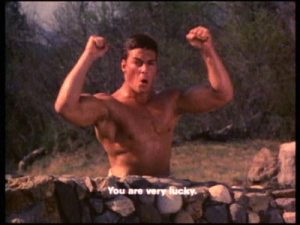 Question 4: Spider-Man and His Amazing Friends, the Teenage Mutant Ninja Turtles, and Tango and Cash hop into an empty elevator. A third of all of them (but only reptiles) get off on the second floor, but that one famous Marvel superhero team with that stretchy dude and the fire guy get on. Stretchy dude and Spider-Man get into a big fight and kill each other before reaching the third floor, where the topless girl from Total Recall gets on. On the fourth floor, half of the living males get off.

How many nipples are left in the elevator?

Seanbaby: Again, it feels more like you’re testing to see if I have a TV, not if I went to fourth grade. Well I best smart because I am both. I know we have 10 people in the elevator after the Fantastic Four arrive and one of them is a turtle. Reptiles don’t have nipples, so we’re at 18 nipples. Two of the nippled people die, which is irrelevant data unless they killed each other with nipple disintegrators. That’s possible — comics are weird, and I still don’t get how an Ultimate Nullifier works.

GamesBeat: Ugh, this one hurt our brains, and we came up with the question to begin with. You are correct and even one-upped us, because we forgot about that one leftover turtle. Still at 5 hit points!

Question 5: If a Tron lightcycle leaves Topeka, Kan., and heads toward Albuquerque, N.M., (approximately 730 miles away) at 150 mph, and at the same time, Sigourney Weaver gets in a power loader and leaves Albuquerque and heads to Topeka at 0.5 mph, when will they collide?

Bonus question: Who survives that crash?

Seanbaby: Well, the bike is going 300 times faster than the space forklift, so we can almost ignore the speed of Sigourney’s vehicle. In about 291 minutes, they will collide into each other 2.5 miles outside of Albuquerque. Lightcycles are sort of designed to explode when they hit things, so I like her chances. But there are still some numbers to run. When two speeding vehicles collide, the drivers leap out and air wrestle for 4 seconds as demonstrated in Mission Impossible 2, John Woo’s 11th best movie. Crunching those numbers, Sigourney still wins six times out of seven.