Nintendo’s Super Mario Odyssey for the Switch is the hottest game at the Electronic Entertainment Expo (E3), the influential game-industry show taking place this week in Los Angeles.

Demos for the 3D platformer are attracting giant lines. Super Mario Odyssey’s trailer has the most views of any from E3 on YouTube: over 3.4 million. After playing it, I know that it deserves all this attention ahead of its October 27 release, because Super Mario Odyssey could be the gaming icon’s greatest adventure yet.

Odyssey is beautiful and vibrant, full of clever ideas. Mario possesses enemies, people, or even inanimate objects — and uses his hat to do so. But Super Mario Odyssey has a lot more going for it. During my short time with two of the game’s levels — the fiesta-riffic desert stage and the metropolitan New Donk City — five things stood out to me as delightful. 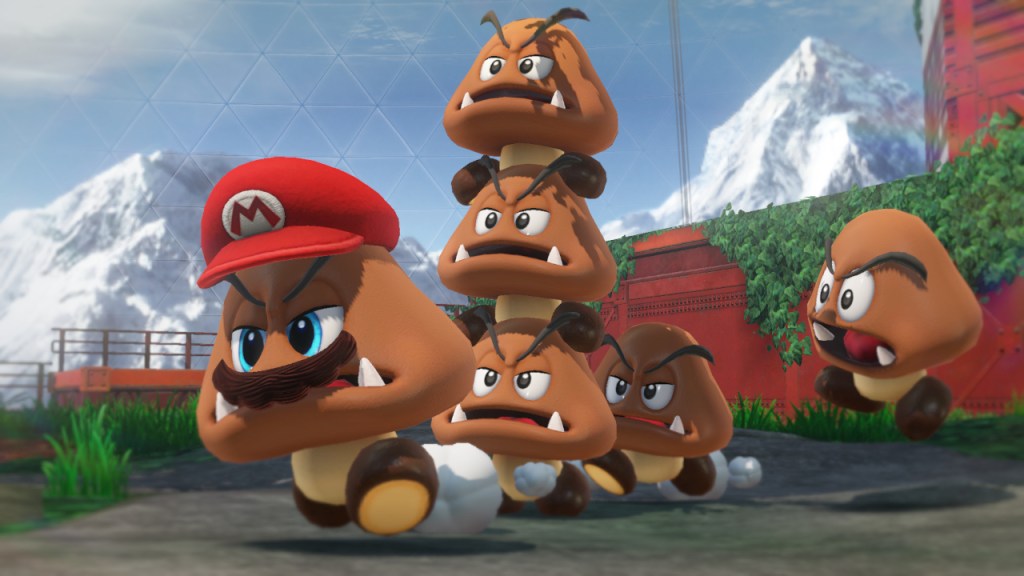 Above: I am your god now, goombas!

Mario can use his hat to possess characters and objects. At one point, I took over a Bullet Bill — the villainous sentient flying cannon shell that’s become a staple of the series —  to help float over a perilous gap. Later, I took over a pedestrian of New Donk City (its proportions are comically realistic compared to Mario) to drive his RC car. I could even possess a bendy pole to help fling myself to faraway platforms.

Just seeing what you can take over with your hat and how it can help you is a constant source of joy and discovery. But you can also use the hat as a short-ranged attack. And if you hold down the attack button, it’ll float ahead of you for a second. This gives you an extra jumping platform.

These mechanics are what make Super Mario Odyssey stand out from its decades of predecessors, akin to the gravity gameplay in the Super Mario Galaxy games for the Wii . I’m excited to see just how crazy Nintendo gets with this whole possession thing. 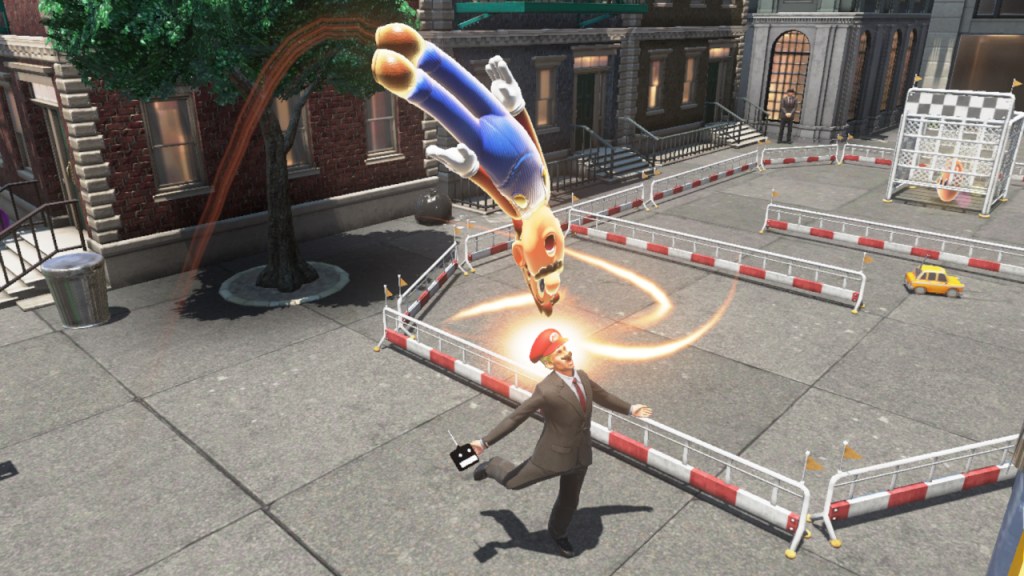 Above: Mario is gonna borrow that guy’s body for a bit.

You can’t have a Mario game without coins, but their function has changed from game-to-game. If you collect 100 of them in most Mario outings, you will give you an extra 1up. In Super Mario 64, getting 100 coins in each level gave you a Star. Collecting Stars were necessary to beat that game.

Sometimes, coins are currency, such as in in the Mario role-playing games like Paper Mario or Mario & Luigi. But this is how coins work in Super Mario Odyssey.

It has two types of coins. The gold pieces are universal, but the purple are rarer and unique to specific levels (each world has 100 of them). You can use these at shops to unlock items such as Moons (this game’s equivalent of Stars) or new costumes for Mario.

The yellow coins also replace the old 1up system. Mario no longer has lives. Instead, dying just takes away some of your currency. So, if you’re saving up for some fancy outfit, you really want to stay alive. 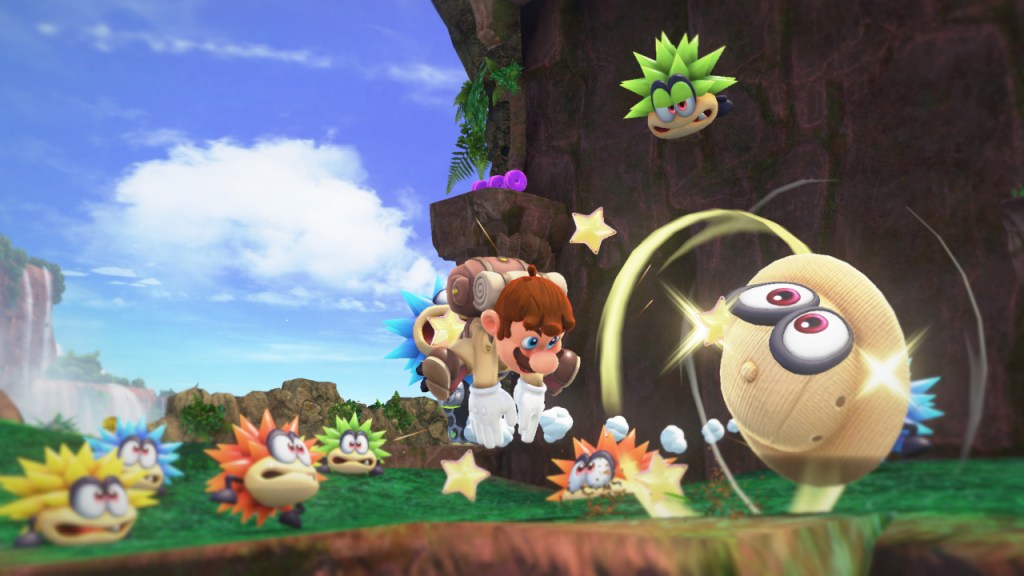 Man, those outfits look great. In the demo, I bought a suit for Mario that made him look like an old Chicago gangster. I was also able to equip a beige adventurer outfit (see above). These clothes didn’t give Mario new abilities, but I love being able to dress Mario up in different styles. He even retains these looks in the 2D sections, which revert back to Mario’s classic 8-bit look.

Nintendo did note that some outfits will provide new moves that help Mario reach new areas. That’s been a mechanic in the series since the first Super Mario Bros., where touching a flower would give Mario a different-colored outfit and let him shoot out fireballs. We could see something similar in Super Mario Odyssey. 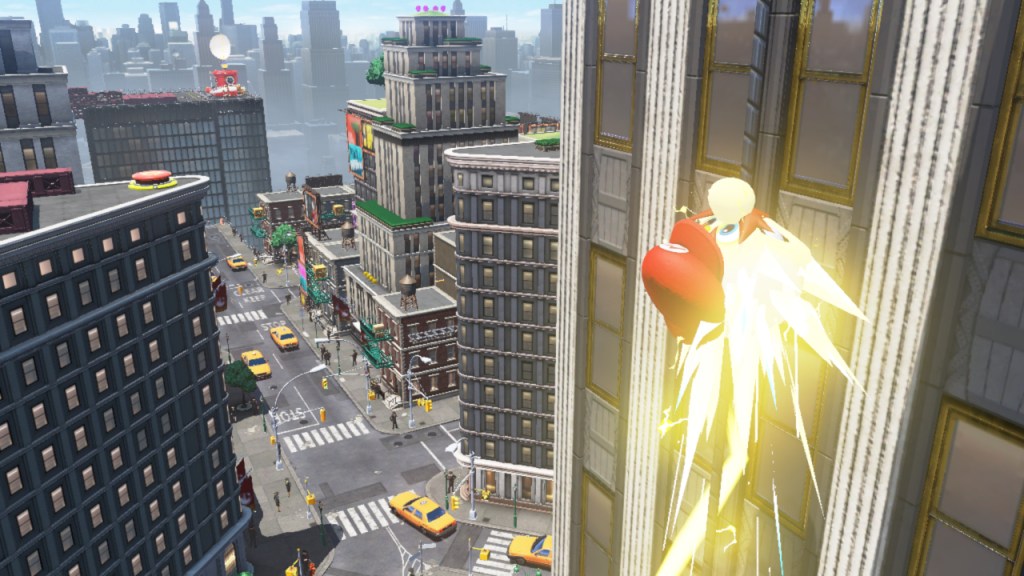 Above: The map can help you navigate these large levels.

It’s bizarre to play a Mario game that has a map screen. It almost feels as if I’m playing something like Grand Theft Auto or Far Cry. You can even touch flagpoles and activate them as fast-travel points.

It’s convenient, but I also I love how the map looks. It’s like a travel brochure, with the map in the middle and tourist information on the side giving you information about the city. This is the kind of Nintendo/Mario stuff that I love — taking something mundane like an in-game map and making it fun and interesting. 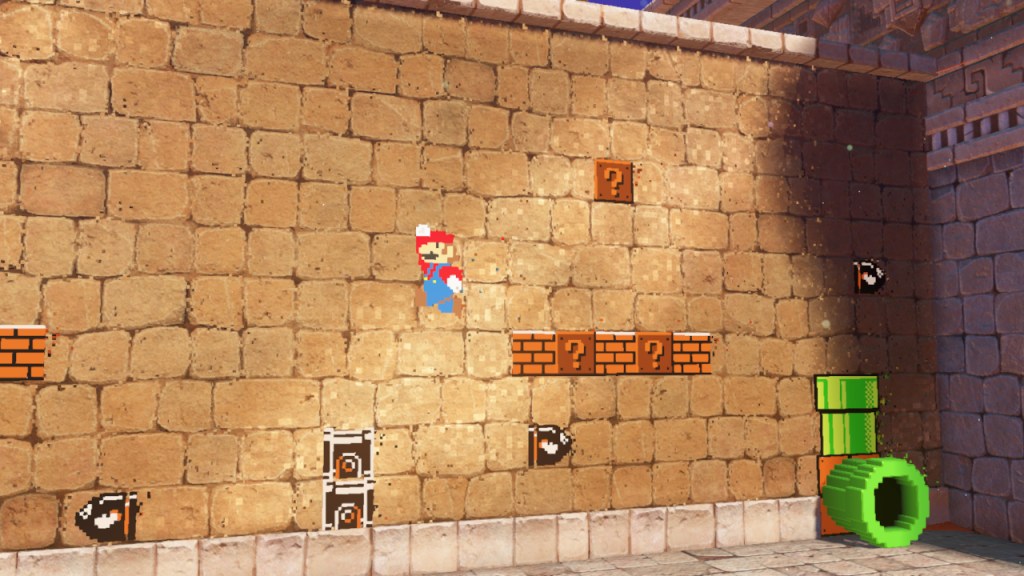 Above: Mario can go into walls, as Link does in The Legend of Zelda: A Link Between Worlds.

The nooks and crannies

Super Mario Odyssey is the most open Mario since the GameCube’s Super Mario Sunshine. It encourages players to run around and explore, and it has a lot to explore. New Donk City embraces this. I spent 10 minutes inside the level, and I spent most of it discovering new areas and secret paths, or trying to use Mario’s acrobatic moves to reach distant places.

As much as I adore the Galaxy games, it’s more linear levels made them lack this sense of discovery. I love reaching some high place, checking out my surroundings, and noticing a dozen different places I want to investigate.

I could happily spend the rest of my time at E3 replaying that Super Mario Odyssey demo. I’m a big fan of this series’ 3D games, but this one has the potential to be the best yet. It’s the ideal combination of Galaxy’s creativity and the open sense of discovery that I love in Super Mario 64.

The Switch has already had one killer app with The Legend of Zelda: Breath of the Wild. As incredible as that game is, Super Mario Odyssey could end up being Nintendo’s best release this year.