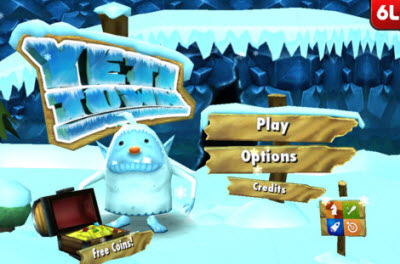 Just in time for Winter, a Yeti game has sprung to the top of Apple’s most downloaded iOS games chart. 6waves Lolapps published its first iOS game, Yeti Town, just last night. The title is the first of dozens that the San Francisco company plans to launching in the coming year.

The Yeti Town game is a puzzle title for the iPad, iPod Touch and iPhone created by Escalation Studios in Texas. It’s a variant of the Bejeweled-like “match three” game where it has a Yeti and snow theme.

The company quietly launched the game yesterday and it is now No. 2. on the list of the top free apps. Though free, the game lets player purchase virtual coins using real money.

“We’re very excited to see the performance of the game and it shows that we can launch a successful mobile game,” said Jim Ying, senior vice president of publishing at 6waves Lolapps. “We believe the same users on Facebook are also using smartphones and this is a logical extension.”

The game launched in eight languages globally. In the coming year, Ying said the company hopes to launch 35 games, including a mix of in-house games and games developed by third parties. 6waves Lolapps has about 200 employees in San Francisco, Hong Kong and Beijing. The company was formed in July by the merger of 6waves and Lolapps.

It will face a lot of competition in from other mobile gaming companies, including Electronic Arts, Gameloft, Glu Mobile, Zynga, CrowdStar, TinyCo, and many more. Spryfox has a game called Triple Town that bears a close resemblance to Yeti Town, with similar game play and other features.