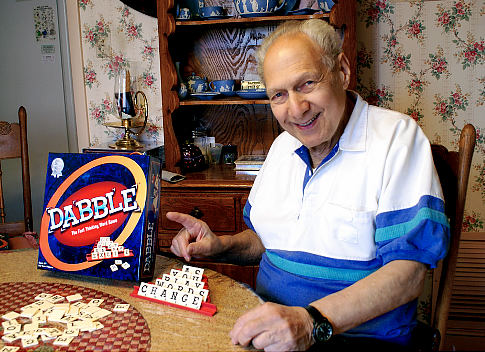 George Weiss is 84, and he just may be the eldest mobile application inventor in America. His app is called Dabble – The Fast Thinking Word Game, and it is now available for iPhone, iPod touch and iPad.

The object of the $0.99 game is to spell five words as quickly as possible suing the 20 letters stacked in a pyramid shape. The five words must include a two, three, four, five and six letter word. The premise is simple and addictive. Dabble feels like the kind of old fashioned game you play with your grandparents — even grandparents reluctant to pickup an iPad.

“A lot has changed since 1958, but people still love a good game,” says Weiss in a press release today, reflecting on the year he first came up with the game. Weiss is hard to get a hold of in person because he cares for his wife who has Alzheimer’s. We will add more from Weiss when he gets a chance to give us a call.

After half a century of tinkering in his Brooklyn basement workshop, Dabble is Weiss’s first invention that has been brought to market. Weiss worked with a large team to make the Dabble app a reality.  The physical version of the game was first picked up and produced by Ideas Never Implemented (INI) in 2011 and distributed by Barnes & Noble. After a few months developers at Flashy Substance and Itch used Corona SDK* from Ansca Mobile to create the Dabble app. 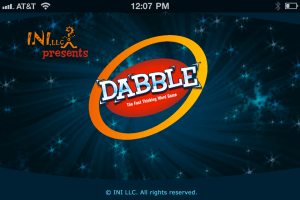 Corona lets users create graphically rich applications and games for the iOS and Android operating systems. It uses the Lua language, which is easier than Objective-C, the programming language used for most iPhone games. There’s a free version of Corona and a $349 version that lets you publish to the App Store.

Even though he didn’t code the app himself, everyone who has been a part of the game’s success points back to Weiss, from the developers at Flashy Substance to the founder of INI. Weiss gets full credit for the game.

“When you’re a creative inventor, you hesitate to share ideas,” said Jay Vohra, president and founder of INI. “There’s this fear the idea will be stolen. But George took a chance. He reached out to me, saying he didn’t have much longer to live and wanted to see his idea expand. He basically let me run with it.”

Vohra was introduced to Weiss through a family friend who had grown up with Weiss. That family connection helped Weiss feel more comfortable sharing his idea.

“He was just happy that someone took interest in his product,” says Vohra. “Then everything started falling into place.”

Vohra introduced the game to Barnes & Nobel who helped market it as a physical board game. Then Vohra took it to the New York Toy Fair where the CEO of Toys ‘R Us and Mattel’s VP of digital played with it and, according to Vohra, loved it. Dabble had the three keys to game success: It was easy to tech, easy to play and could easily transfer to digital. And now it has. 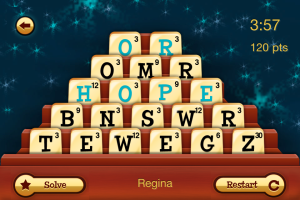 The Dabble app was developed by Joesph Flowers of Flashy Substance, who says the award-winning board game provided a unique foundation to create an app.

“It was easy to see how this could be come an app,” Flowers says. “We usually create games for competitive gamers ages 18 to 40, but this time we focused on keeping it simple since the board game is simple. The first time you play the app you may not win, but you will understand how to play. This is the first time we’ve been able to sit down with our friends and family and share a game we’ve built.”

Flowers has rave reviews for Corona SDK. He says he had a playable prototype of Dabble within eight hours of development. Flowers notes that the hardest part of building a successful app is acquiring a player base. The app’s base will grow thanks to the flyers going out in all new Dabble board games, encouraging players to download the app. (Watch the a video at the bottom of this post to hear more from Flowers on how the game works.)

Flowers worked with musician Robert Scott on the soundtrack for the Dabble app. The resulting music is charming and the sound effects are spot-on. This is Scott’s second game soundtrack but, based on the catchy song he composed for Dabble, it won’t be his last. The game’s letters make a satisfying “clink” like Scrabble tiles as they are placed on the board. The whole score is custom, nothing was off the shelf.

INI will expand Dabble further with plans for Dabble Jr., Super Dabble, an app for Android and a game on Facebook. When it comes to this game, the sky’s the limit.

“I never gave up,” said Weiss. “And now, I have the satisfaction of knowing that I didn’t waste all those years!”

*Corona SDK was used by 14-year-old Robert Nay of Utah to build Bubble Ball, which knocked out Angry Birds to become the top free app in iTunes back in January 2011. Nay did the work on the programming and the art and his mother helped him design most of the game levels. Like Dabble, Bubble Ball appeals to a wide audience with simple graphics and basic rules.