Flappy Bird has taken over the No. 1 spot for free games on the iOS and Google Play app stores in the past week. It’s a simple game in terms of graphics, but it has very difficult gameplay. And that has made people play it over and over again (including my own kids) and helped it spread broadly.

Some observers think such a rocket ride as Flappy Bird has seen can only be possible with massive promotion and bots (or promotion through paid, fake user tweets and reviews). But game designer Dong Nguyen of dotGears, a one-man shop in Hanoi, Vietnam, has said the growth has all been organic.

In Flappy Bird, you tap the screen to make the bird fly. Since there are no instructions, the first time you do this your bird will flap its wings once and then nosedive into the ground. Then your game is over within a second. The next time, you’ll figure out that you have to keep hitting the screen to make the wings flap. And then you have to maneuver your bird through Mario-like pipes. That’s the hard part. After a hundred or so tries, my record is seven. My kids are doing better at 11 and 13.

If you play the game, you’ll see it has some rudimentary advertising integrated into it. So Nguyen is starting to cash in on his creation, which actually hit the App Store way back in May 2013 but only recently took off. The game has no in-app purchases, which are the usual way for free games to make money these days on mobile.

Sarah Young of mobile advertising firm NativeX has her own theory on why Flappy Bird has been so hot. One of the reasons is that the skill-based gameplay cycle is so short that you can try it over and over, and then you’ll want to share that experience.

“It’s extremely addicting,” Young said. Beyond that, the game is competitive and challenging, requires skill, has fast sessions, is unwinnable, makes players feel nostalgic with 8-bit graphics, and is viral.

Here’s her nine observations about what emotions you experience during 10 minutes of gameplay:

Curiosity, of the mysterious app that appeared at the top of the charts.

Nostalgia, from the Mario theme and the coin chime. Everyone has a warm fuzzy feeling when they are reminded of playing Mario.

Vindictiveness: Hey they just ripped off the Mario theme! Bogus.

Confusion: WTF. I got Game Over in 5 seconds?

Panic: OMG, you’re about to get your new best score… don’t blow it…!!”

Frustration: “Ugh I suck at this game!”

Denial: “This game is impossible,” or “It’s TOO hard. They need to make it easier,” or “This game sucks.” 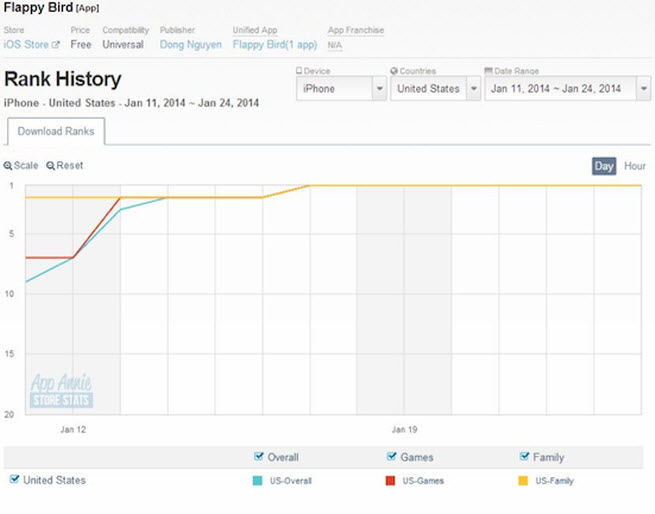