The 3-year-old 99math has a multiplayer math game that teachers use in classrooms around the world. After debuting as a beta tool in 2019, 99math grew into a gaming platform for kids with over 300,000 users. Together, students in 99math have solved over 170 million math problems. It turns out one of the tricks to getting children into math is to get kids competing with each other in the classroom.

“For some kids, it’s the hardest and the the most boring subject,” said Tõnis Kusmin, CEO of 99math, in an interview with GamesBeat. “But games are designed for the player and when designed well, they can keep us incredibly engaged. In education, gamification has been around for a while. But I don’t think many of the edtech gamified solutions are actually very engaging.”

That traction helped it landing the funding to boost usage in the classroom and implement monetization. Genesis Investments led the round, with participation from Change Ventures and five angel investors from leaders at companies including Bolt, Transferwise, and Pipedrive.

Proceeds from the current round will be invested in the development of a mobile game for children to play at home and premium plans, Kusmin said. 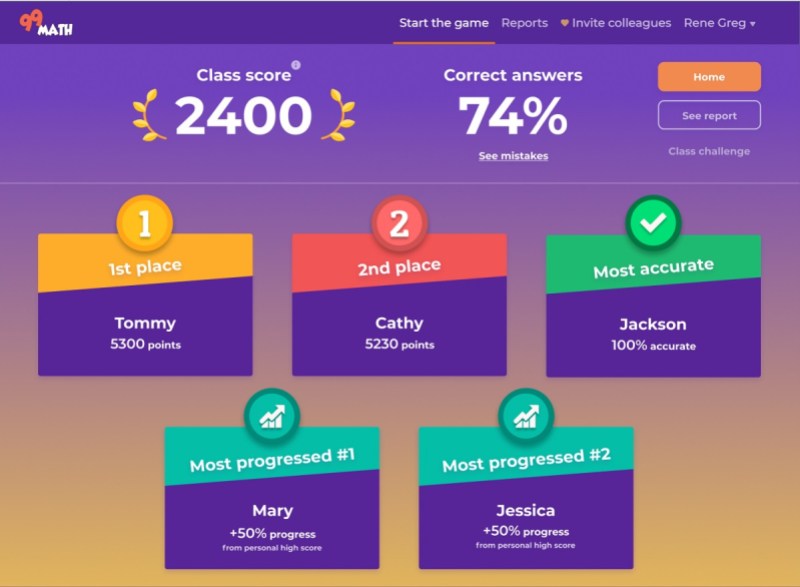 Above: 99math gets kids to compete against each other and it gives them rewards.

99math is a free tool for teachers and schools to engage students and it works as a platform for game-based math practice. Math problems are generated based on teacher preferences, and students play on their own devices.

“Our first goal was to build a product that teachers would actually want to use in the classroom,” Kusmin said. “We optimized the tool for teachers to use in a classroom.”

Starting a game takes less than a minute, and the entire classroom can play at once. I played it and it helped me exercise my addition muscles for the first time in a while. I solved 22 problems in a minute on the first try. And I got better on the second try.

“What we’re measuring here is fluency,” Kusmin said. “You need both accuracy and speed. Imagine doing the same thing with 29 kids in the classroom and you’re all competing to do the best.”

Both teachers and parents can track the progress that kids make over time.  When children receive negative feedback about their skills, they begin to believe they are not good at it, Kusmin said. Eventually, they try less. The focus for 99math is to design fun games first, Kusmin said.

Above: Kids can use their mobile phones for 99math problems.

“It’s all about delivery of knowledge,” he said. “I saw how we could build a game that would be engaging for kids. It doesn’t have to be matching three candies. It can be solving math tasks. And it’s not that not that different. I saw a way where we can engage kids doing the math as well.”

The game tries to celebrate success and reward the player for progress to motivate the kids to keep at it. So far, key markets include the U.S. and Latin America.

The company lets teachers use the platform for free, but it hopes to make money from parents. Other companies have monetized parent subscriptions as well. That helped the company when it came to fundraising.

“In the past, educational tech has had a very slow and long sales cycle, but we are building a self-service subscription model,” Kusmin said. “Our investor has already invested in some tech and game startups, and they understood that monetizing parents can be scaled up faster.”

“As a teacher, you select the skill, click on it, and the game is up and running,” he said. “What teachers like is that it requires virtually no preparation time.” 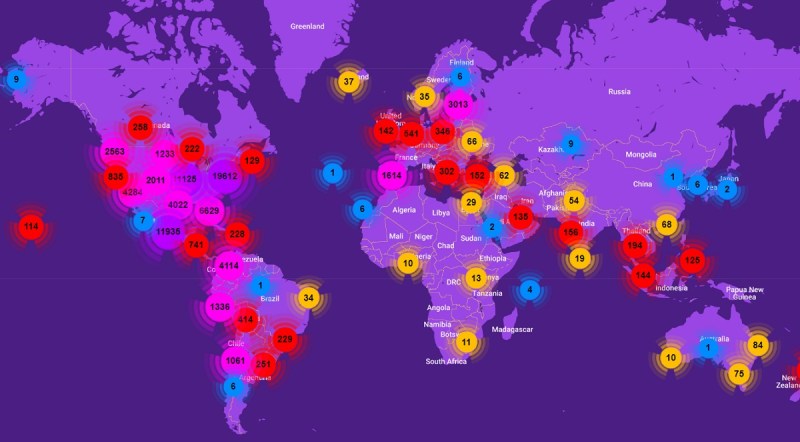 Above: 99math is played around the world.

Kusmin previously started three different edtech products, including the Tebo platform used by 50% of Estonian teachers. The cofounders include Timo Timmi, who is named in the Transferwise 20 Under 20 entrepreneur list in Europe, and Ain Arend, who built his first content management system in high school and led the tech team at ADM.

Vital Laptenok, the general partner at Genesis Investments, said in a statement that 99math has solid traction and organic growth. The venture firm hopes to share its expertise in subscription businesses with 99math to help it reach greater scale in the U.S. and globally.

The company has 10 people now, spread across Estonia, the rest of Europe, and the U.S.

“Since the moment my friend from Change Ventures introduced me to 99math, I knew it was a startup with a huge global potential. First, I was impressed by the team’s ability to work with U.S. and Latam teachers and satisfy their needs properly, while building the product from Estonia,” said Elena Mazhuha, investment manager at Genesis Investments, in an email to GamesBeat. “Secondly, customer feedback on 99math indicated that the team managed to build a product truly loved by its users. The majority of teachers recommended 99math to each other all over the US and other countries, which gave 99math rapid organic growth. And finally, the global market opportunity for math education is large. According to our calculations, only in the US parents spend around $28 billion on additional math education and tutoring.”

The company is adding more features. It started with addition, subtraction, multiplication, and division. It has mapped out games for the future from first to sixth grade. Then it hopes to branch out into other kinds of lessons. It’s conceivable that this kind of competitive play could be used for esports, he said.

“We developed this model that is really engaging for students to play and compete with other students,” he said.