A Bit Lucky, a social gaming firm that is shooting to make high-end Facebook games, is launching its second game today, called Lucky Space. The game is in the simulation and strategy category on Facebook and has players build a space colony in a sci-fi universe. If it turns out to be a hit, A Bit Lucky can consider itself a real player in the high-stakes social gaming market.

A Bit Lucky already has a good track record. 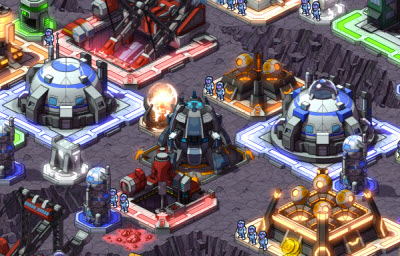 The new game follows Lucky Train, which put the San Mateo, Calif.-based company on the map. Lucky Train, a train simulation game, was one of the highest-rated games on Facebook. That enabled the company to raise $5 million from investor Nexon.

Lucky Train was a big hit among young males, boys (who no doubt played on their parents’ Facebook accounts) and hardcore gamers. Lucky Space is a similar title, sort of like StarCraft, blending a lot of complexity with an easy-to-use interface and not so much fighting. 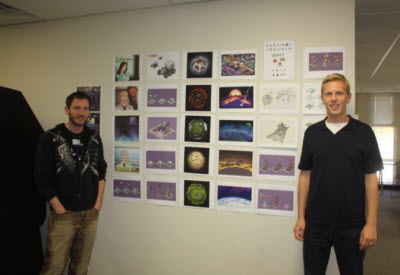 “We are aiming to create high-end social games,” said Frederic Descamps (pictured left, on the right side), chief executive of the company, in an interview. “We are aiming for the players who might otherwise look down on Facebook games as inferior. We believe that video games and social games are merging, and we’re just at the beginning of it.” 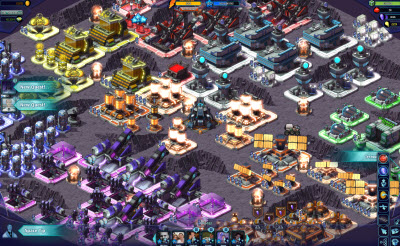 A Bit Lucky stands out from the pack of Facebook game companies by putting a lot of emphasis on advanced graphics. It created its own custom Flash game engine so that the game could run fast, even though it is running on Adobe Flash within the Facebook user interface. Like Lucky Train, Lucky Space also has interesting graphical touches. For instance, the glowing lights in the space colony buildings are pretty unique for a Facebook game, said Jordan Maynard (pictured above, left), chief creative officer of A Bit Lucky.

Lucky Space is a social game, where you can help your friends build their own colonies and you can visit their creations. The game allows you to build out your planetary colony, but it also prompts you to go on missions in order to advance the larger storyline. Players can uncover the mysteries of extraterrestrial civilizations and develop their colonies into self-sustaining habitats.

They can mine for resources, explore new terrain, and defend their colonies from cosmic threats such as meteors. For instance, you can build a missile turret to shoot down meteors. 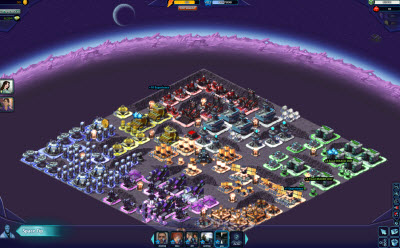 The goal is to create a game that keeps players engaged for a longer time. The game has a sense of humor from the start, when you find out that your dead uncle bequeathed you an alien planet, which you must cultivate in order to get rich. You can shop at stores such as Worm Whole Foods, and there are references to sci-fi lore from Dune, Star Wars and Star Trek.

The game world is hidden at first and you have to explore it little by little. You can check to see how well you are doing compared to your friends by examining details such as how many resources they collect per hour. Some resources are rare, and you have to collect a bunch of items in order to build some of your structures.

A Bit Lucky’s games are free-to-play, where users can play for free and pay real money for virtual goods. Like other Facebook game makers, the company focuses on developing communities, learning through iteration, fast development cycles, analytics and feedback. The company has learned from early testing that players usually play the game for 25 minutes the very first time they play. 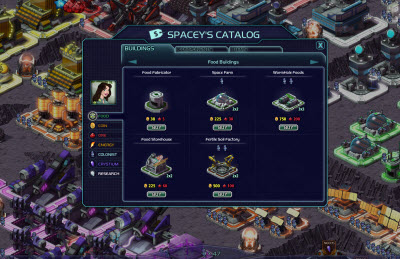 Descamps and Maynard co-founded the company in November, 2009. They raised a round of $2.7 million in angel funding in February, 2010, and launched their first game in June. They spent a lot of time enhancing that game after launch and then broke off a new team to build Lucky Space in January. The company has 20 employees, including a number of veterans of game companies such as Electronic Arts, Trion Worlds, and others. The Lucky Train game peaked in November of last year at around 300,000 daily active players.

Descamps said he believes there is still room for a lot of different kinds of games on Facebook, just as Facebook game evangelist Sean Ryan has argued. A Bit Lucky is trying to make games that don’t compete head-on with Facebook leaders such as Zynga. Rivals include Kabam and Kixeye.

“We see tons of growth ahead, if you focus on innovation, new game play, new genres and better quality,” Descamps said.