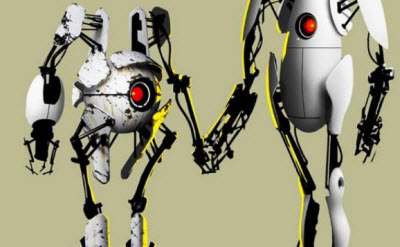 Video game sales rose 20 percent in April as a series of big titles finally pumped some life into the core console game business.

It was the biggest monthly year-over-year increase in a long time. The industry can thank sales of blockbusters such as Mortal Kombat and Portal 2 (pictured), as well as strong sales of Microsoft’s Kinect motion-sensing system and Nintendo’s new 3DS handheld device.

The sales figures are closely watched because they’re a good measure of the health of the multibillion-dollar industry. These figures suggest that core games are finally coming back after the recession and free games took their toll.

Total physical channel sales — games sold at stores for consoles, PCs and handhelds — grew 20 percent to $961.2 million from $802.4 million a year ago, according to market researcher NPD. The figures are strong despite 10 days of an outage for the PlayStation Network, which may have put a damper on Sony PlayStation 3 game sales during the month.

The sales are a welcome relief for game publishers after a relatively weak March. In March, despite the launch of  Nintendo’s new handheld 3DS, sales were down 4 percent to $1.53 billion.

The game publishers have argued that weak retail sales are masking the true growth of the video game industry, as the numbers don’t include digital sales of games. Those digital sales include online games, social games, used games, subscription games, rentals, and smartphone and tablet games. NPD measures those sales about once a quarter.