Depending on your disposition to the idea of a real-life X-Files program, the name Nick Pope may have one of a variety of effects on you. Pope has long been a staple of the ufology scene thanks to his role as a UFO investigator during the 21 years he worked for the the United Kingdom’s Ministry of Defense. Naturally, he’s now involved in the new XCOM game.

GamesBeat met with Pope at a private The Bureau: XCOM Declassified event held by developer 2K Marin and publisher 2K Games. You can read our thoughts on the game itself, along with developer interviews, in our hands-on preview.

GamesBeat: Can you start off with the general overview of your responsibilities as a UFO investigator?

Nick Pope: I had to basically investigate UFO sightings and see if they were any potential threat or, more generally, if they were of any defense interest. We didn’t take a view on what they might or might not be. We just said, “Look, people have seen things.” Particularly, as it’s often alleged, these were solid-structured things in our airspace. That made it a defense issue. That made it a national security issue.

But like I say, we didn’t take a view on whether we were dealing with aliens or whether we were dealing, as was the original thinking, with maybe the next generation of Soviet spy planes or drones, something like that. That was basically the job. Through that, anything else weird or wonderful that there wasn’t a place for in government kind of came our way by default, particularly if it was perceived that there was a link with UFOs. Alien abductions, crop circles. We found ourselves getting all the weird stuff, like people who had seen ghosts at military bases. That’s why it has been called the real-life X-Files.

GamesBeat: What do you do now?

Pope: Basically, I work as a freelance writer and broadcaster. I’ve written a couple of sci-fi books. I do a lot of TV work on shows like Ancient Aliens. I’ve worked with some of the Hollywood film companies on some of the PR for movie launches, if there’s an alien theme. I guess people come to me and say, “Well, we’re doing this as fiction, but there’s very often an interesting tie-in. Is any of this actually true?” 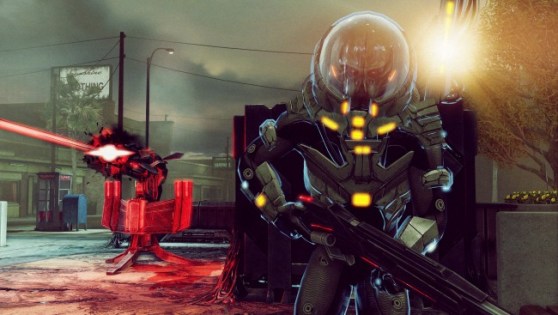 Above: The alien threat from The Bureau: XCOM Declassified.

GamesBeat: Some of your findings over the past couple of decades have been declassified recently, is that correct?

Pope: Yeah, almost literally just two weeks ago, three weeks ago. The British government finished what had been a five-year program to declassify and release the entire archive. That was round about 52,000 pages of documents. A lot of it was just fire lanterns and weather balloons and things like that. But there were some more interesting cases in there too.

Pope: Sure. The most famous case in there – and I think it’s a better case than Roswell – is something called the Rendelsham Forest incident.

This was December 1980. A UFO was actually seen to land in a forest between two military bases. This was in the U.K., but they were American Air Force bases. This small triangular craft of some sort came down in a small clearing, and a patrol of security police, who had originally thought a plane had crashed, went out and encountered this weird thing. They saw strange symbols on the side of it that looked a bit like Egyptian hieroglyphs. Then it rose up above the ground very slowly, cleared the treetops, and shot away to the horizon in an instant. Two days later it came back. It didn’t land that time, but it was flying around in the area.

The witnesses included the deputy base commander. They went back to the clearing where this thing had landed on the first night and they found indentations, showing that something heavy had been there. They took a Geiger counter out there and found that the radiation levels seemed to be significantly higher than background. It’s a phenomenal story. Some of the guys now have health issues. There’s talk of a federal lawsuit.

There’s a whole bunch of former congresspeople that just wrote, at the beginning of May, a letter to the secretary of the Veteran’s Affairs department and to the president saying, “The two guys who got close to this can’t get their medical records out of the system. Please help them.” It’s a really good case, because it’s not just anecdotal. Like you said in your question, there is a declassified and released audit trail of government documents to show that this happened.

GamesBeat: It’s interesting that you worked on not only your own fiction but also Hollywood and now games. Do you feel like the surplus of fiction surrounding this topic colors people’s opinion as to whether something like this could ever be real?

Pope: There’s a whole bunch of conspiracy theories about this. Science fiction and the whole idea of aliens, in movies and computer games, is so embedded now in the public consciousness that it’s difficult to separate the fact and the fiction. Some people think that Hollywood movies and computer games are one of the ways in which governments slowly acclimatize people to this. There used to be this old theory that you couldn’t say this was real, because there would be panic in the streets.

But what if you slipped it out generally, slowly, over the years, in all these movies, so that people were so used to the idea? I think the opinion polls now show that round about 50 percent of people think there’s visitation by aliens. A much higher percentage believes that there’s life out there in the universe, but around 50 percent, I think, think they’re coming here. A sizable number of those people think that governments know more about it than they’re letting on. I don’t know. It’s odd, because if that was the case, it’s a slightly mixed message. You get good aliens like E.T. and then you get the whole Independence Day, War of the Worlds, XCOM thing, which is more about full-on violence and invasion.

I suppose it’s a point about films more generally, that it’s more likely that movies and computer games will show aliens hostile, because it gives you that whole dynamic of a struggle to deal with. With a movie like E.T., it’s just getting home, and that’s it.

GamesBeat: And feed him Reese’s Pieces. So what has been your contribution to the XCOM project?

Pope: It’s basically just helping, maybe, to start a conversation with the people that play the game, to ask the sort of questions that we’re getting to. “Could any of this be based in reality?” “Did something like Roswell, for example, really happen?” And if it did, questions like, “Would the government keep it secret?” and “Could you keep a thing like this a secret?” Which I think are two different questions. I think, on the first answer, it’s probably, “Yes, you would keep it secret.”

I think technology acquisition gets to the heart of it. Hopefully this is the sort of thing that I can contribute to a conversation about this. The country – or corporation, maybe – that first gets its hands on alien technology, if such a thing exists, is going to have such a huge advantage that the stakes are high enough to justify secrecy. You’d want it for yourself. So, going back in time, if Roswell really happened, you could understand that some overenthusiastic base PR person said, “Oh, we’ve got one of these flying disks,” and then high command stepped in and said, “No, it’s a weather balloon” and took it away to hangar and worked on that.

You wouldn’t want to share that with the Soviets, particularly with the Cold War just starting. 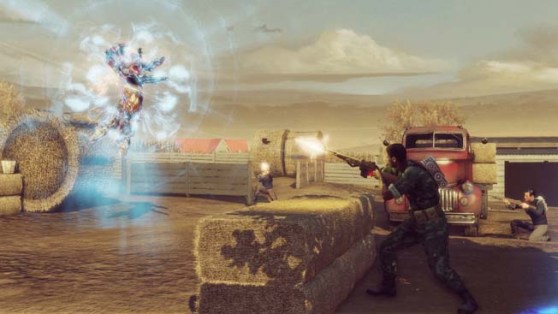 GamesBeat: What do you think of the game so far?

Pope: Oh, I love it. I’m not just saying that. I mean—I guess I was brought up, maybe, in an era where games were just a few pixels moving clumsily across the screen. I can’t even remember what they were called. What was that one where you just bounced it around?

Pope: Pong! I’m probably showing my age there. But you look at something like The Bureau, and it’s just, “My God.” The other thing is, I love that whole style of the ’60s, whether it’s the cars or the shops, the signs. It’s got a nice feel to it as well. Like I say, I don’t play these games, so I can’t, I’m afraid, give any sort of technical-insight clever answer to that. But I’ve obviously sat in on some meetings; I’ve looked at it, and I’ve thought, “Wow, that’s impressive.”

GamesBeat: In all your decades of work that you’ve done and your hypothesizing and discussion and so on, if you turned on the news and saw that aliens were arriving – lights in the sky and that kind of stuff – would you be excited, or would you be worried?

Pope: Both. I’d see it as almost a validation or a culmination of a quest that I guess I’ve been on. But also—I guess, self-evidently, if aliens get here, given that we can only just about slowly send a few space probes out to the edge of our solar system, if somebody has cracked viable interstellar travel, they’ve got technology orders of magnitude above and beyond anything we’ve got. So I couldn’t help but be worried.

I think Stephen Hawking said this – it would be like the European explorers meeting the Native Americans, only we’re the Native Americans. We’d have to hope that alien visitors are explorers, ambassadors, adventurers, and not the sort of cynical exploiters that, sadly, in human history we’ve tended to be when we encounter new territories. So we’re going to have to hope that they’re friendly and altruistic, because if they’re not, we’re in trouble.

GamesBeat: We can hope that it doesn’t come back on us, all the terrible things that we’ve done to other civilizations.

Pope: Yes. It would be a kind of cosmic karma, I suppose, if it did. Our only hope would be that great staple of sci-fi, to use the aliens’ own technology against them.

GamesBeat: Or water and air, in the case of Signs and War of the Worlds.

Pope: [Laughs] Yeah, or Independence Day: Just plug your laptop in and take down the entire alien defense system.

GamesBeat: I think the secret is just to have Randy Quaid on speed dial and to keep his crop-duster fueled.