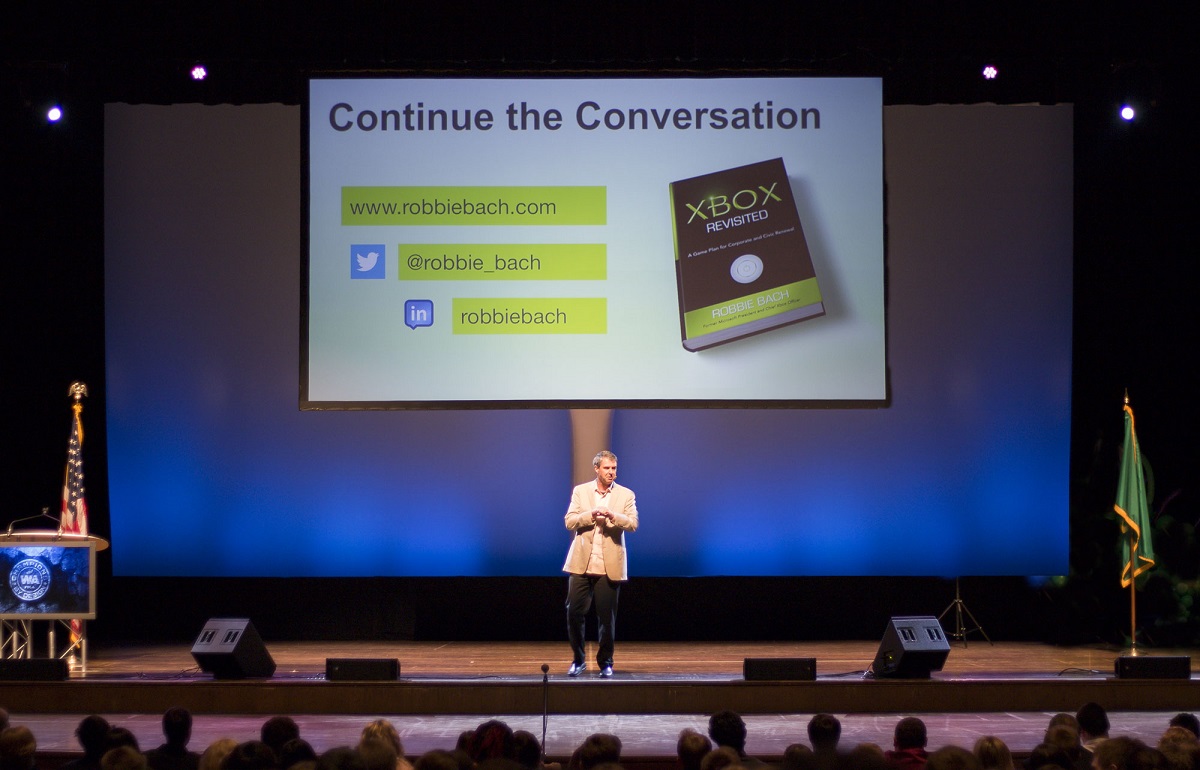 GamesBeat: Do you have a party affiliation? Republican or Democrat?

Bach: I’d say I’m a Republicrat or a Demlican. Pick which one you want. One of the things that was good for me, writing the book and forcing myself to work through the framework, is I discovered sides of my belief that I had lost during my time at Microsoft. Not for any particular reason, but just because I hadn’t thought about them in a long time. I realized that on many social issues I’m probably left of center, and on many financial and fiscal issues I’m right of center. That’s a place that, politically, if you talk about parties, is no-man’s-land today. I look at each issue and decide what I think is right on that issue.

GamesBeat: It seems like you favor common sense or centrism or….

Bach: The organization I’m spending time with, to the extent I’m spending political time, is the Bipartisan Policy Center. They’re a rational, common sense, how do we tackle problems organization. It’s founded by four Senators who were cross-the-aisle Senators. Lord knows we need more of that.

GamesBeat: You promoted diversity as one of the answers to the problems we have. It didn’t seem like a natural conclusion for you to come to, given your own background.

Bach: The thing that you have to understand — I just wrote a blog post to make more of this clear, talking about immigration. I believe in the power of American diversity. It’s what made this country great. It’s not painless. We’ve been fighting about diversity for 200 years in many respects. But in the end, from that diversity comes new skill sets, new thought patterns, new approaches, new ideas, innovation. Look at the Valley.

There’s a lot more room for even more of that diversity. You can imagine where I come out on immigration issues, for sure.

GamesBeat: Some of it looked like it also came from your 9/11 experience, driving across the country. (Bach was in New York when the twin towers fell. He had to drive across the country with colleagues to get back to Seattle).

Bach: That experience had a huge impact on me. I sort of understood, at the time I wrote that little journal while we were riding — I think you see in that some of the elements of how much impact it had. As time has passed it’s had even more impact.

The other part is, someone in my family did a bit of research and discovered that my family came to the United States in 1850 from Luxembourg. You start to realize the different influences. My mom is Irish and French. You start understanding your origins and realize that being American is in many respects a combination of lots of other things. That’s powerful.

GamesBeat: What comes next for you?

Bach: I’ll expand the work I’m doing in public speaking. I do a fair amount with companies and I’ll do more of that. I’m doing quite a bit in universities, business schools and undergraduate schools. I taught a class last semester at the University of North Carolina, which I really enjoyed. There will be continued speaking and spreading that word, continued blogging.

I’ll almost certainly write another book. Right now I’m taking a break to focus on blogging and speaking and helping get this book up to scale, but about the turn of the year I’ll sit down to decide what I want to write about next. It’ll have something to do with the civic engineering path I’m on.

GamesBeat: Handing the reins over to Don Mattrick, how do you feel about that now, as opposed to then?

Bach: I felt great about handing the reins to Don. He had more experience in the industry than I did. He was eminently qualified to do the work. He was running the team for at least the last two years when he was working for me. Really, all that happened when I left was Don went to work for Steve.

That was, in some ways, the easiest of the handoffs I had to make. By the time we got to 2010 I was running about six or seven businesses. A couple were obvious as far as how the handoff would work and we made those right away. Others, we had to work through them over the last six months I was there.

GamesBeat: How about Kinect and the future of that technology?

Bach: It’ll be interesting to see where that goes. I am a believer in the idea that voice and video — especially if you extend that into augmented and virtual reality — are powerful. The challenge everyone’s struggling with, including the Kinect folks and the AR and VR folks, is how you commercialize it.

The example we talked about earlier, about touch — Touch was around for a long time before the iPhone. It took a certain set of things coming together to commercialize that in a way that made it mainstream. So how do all these new interaction modes — cameras, voice, touch, motion, AR and VR — get commercialized in a way that creates one of those special customer experiences?

Right now I don’t think anyone’s gotten it. Kinect creates some wonderful experiences, but it’s not all the way there. It’s a great product and a great innovation, a great step forward, but there’s more work to do. The stuff I’ve seen on AR and VR has real promise, but if you said it was a mainstream technology right this minute, I don’t think most people would agree.

Those are all good areas. I love the work we did on Kinect. I think it was ground-breaking. The team will carry that forward in other ways. There’s a lot of life to it. 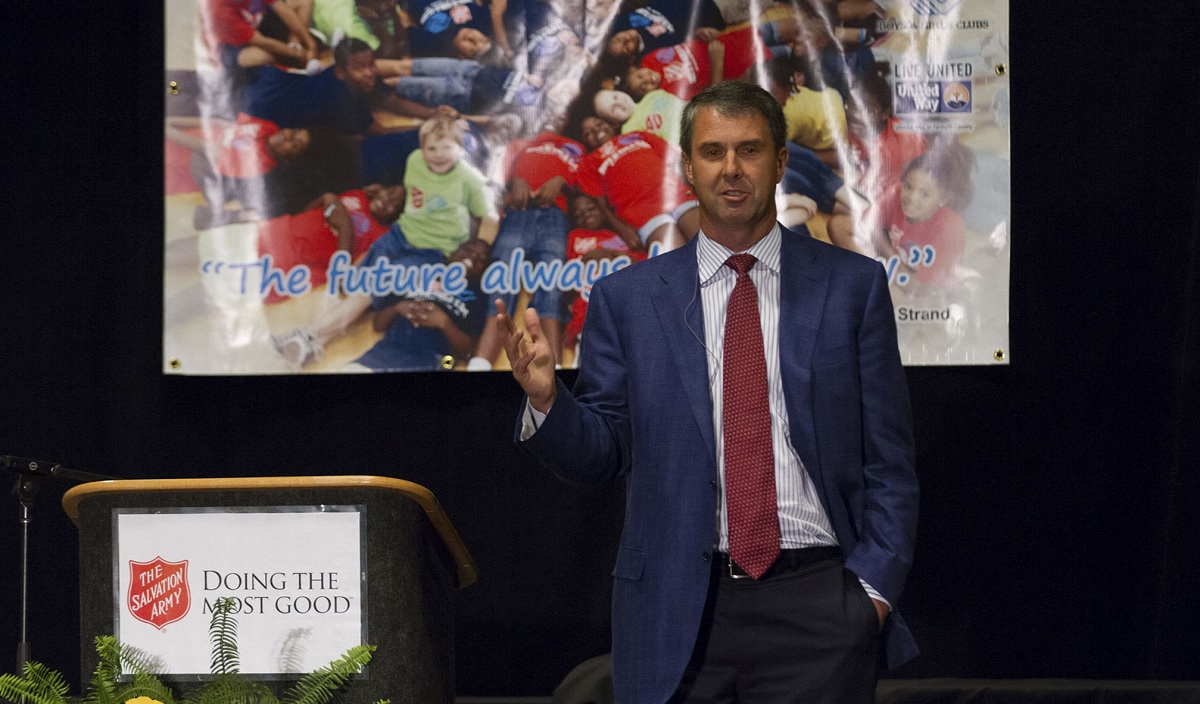 Above: Robbie Bach has helped lead various charities since retiring from Microsoft.

GamesBeat: What do you think about the process of getting Bungie out of Microsoft and how things worked out there?

Bach: In the end what you have to say is, everything worked out well. In some ways the process — who knows what the right process was? I don’t know that there’s an easy right or wrong way to do something like that. But in the end the Bungie team is happy and doing great things. Microsoft has Halo, a great thing for Microsoft. 343 continues to do a great job with that franchise. It’s hard to think that anybody came out bad.

The lesson you have to take away from it is that managing creative talent is hard. It’s challenging. Don’t just look at Bungie. There’s a litany all through the game industry of creative teams that become part of big organizations, and it’s good for a period of time, but then there are challenges and people think of new ways to keep people engaged. Sometimes that means people go off to create another company. Sometimes it means you spin out the company. There are lots of ways to deal with that. It’s not just true in the video game space. Look at movies and TV and music. They’re littered with examples of how you figure that out.

When it’s all said and done, everybody came out pretty happy. That’s a good thing.