SAN FRANCISCO — I’ll always remember my Grandma’s sense of humor. My younger brother once told her that the Jews killed Jesus. She looked at him, looked at my parents, and then shrugged. “Darling,” she said in her Russian-New York Jew accent. “That was your Grandpa’s side of the family.”

My Grandma’s sense of humor fit the laugh-at-the-pain attitude that runs throughout Jewish culture, and this ability to laugh at ourselves — even when something could be offensive — is one of the things I cherish about being a Jew. After playing about two hours of the upcoming role-playing game South Park: The Stick of Truth, I wondered how far the makers of the show and the game’s developers — who worked on it together — would treat the Jew class. And I realized something surprising: Being The Jew in South Park isn’t as offensive as I thought it might be.

In fact, it’s pretty funny. And I think my Grandma would’ve agreed.

I was among the batch of journalists who played the upcoming Xbox 360, PlayStation 3, and PC game (due out March 4) based on the long-running Comedy Central cartoon. Developed by the RPG veterans at Obsidian Entertainment, South Park throws you into an epic quest. Well, OK, it’s epic to series misanthrope Eric Cartman and the other rapscallions of that quiet mountain town.

The forces of the Kingdom of Kupa Keep — for whom Cartman is the, um, Grand Wizard and leader — face the evil forces of the Drow Elves. These are really just a bunch of other kids in town. At stake is the fate of the sacred Stick of Truth. While it’s a stick, in the little scamps’ imaginations, it’s an all-powerful artifact. The KKK (yes, that’s what Cartman calls his realm) holds it at the moment, but that’s about to change.

And this where The Jew comes in. 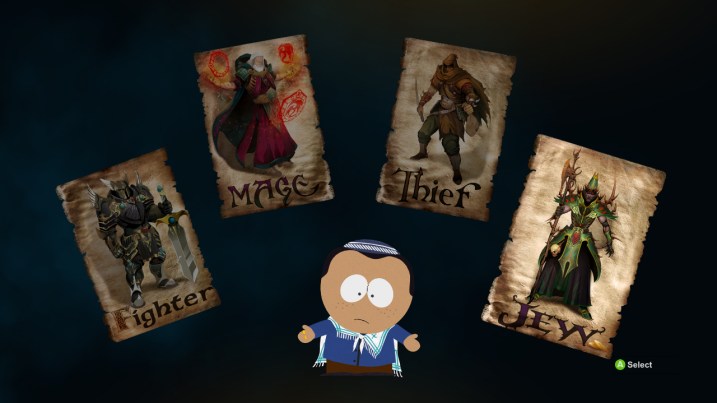 Above: The Jew is its own class in South Park: The Stick of Truth. And it’s a hoot.

The Stick of Truth has the classes you typically find in an RPG — fighter, paladin, mage, and thief. And you can also be … a Jew. When you become one of god’s Chosen, as I did, Cartman makes a joke about Jews and money, but he doesn’t really dig into you. You are, actually, the Chosen One (as far as the game’s concerned, at least), so while Cartman might think dreidel is lame, and he may make a mean Hitler, Cartman needs you. So he plays nice.

Well, nice for Cartman is relative. He dubs you “Douchebag,” after all. (That’s your character’s name, and the kids use it liberally).

My Jew, with his argyle sweater and glasses, looked like a miniature accountant heading to shul. Instead of armor, you wear a tallit (a prayer shawl) and a yamulke (a skullcap). The weapon you start with is a shepherd’s staff. Your first special ability is the Sling of David, which fires a projectile that leaves a trail of little, glittering Stars of David in its wake. None of this is offensive; compared to South Park‘s infamous “Passion of the Jew” episode (the one where Cartman essentially becomes Hitler and turns the town’s residents into Nazi stormtroopers), it’s almost quaint.

And it’s all silly. I expected The Jew to be some sort of albatross class, something low-powered that dealt with counting loot you earn from defeating enemies or riffs on other stereotypes. Instead, The Jew turns out to be something that’s different from any class in RPGs — and hilarious.

And it gets even crazier when I discover Jew-Jitsu.

Eat your heart out, krav maga

Jew-Jitsu is another of the Jew’s special abilities, and it was a surprise. It’s a martial-arts attack that delivers a stunning blow, but that’s not the best part. It comes with its own animation. And unlike many of the cinematics that accompany special attacks in games, this one’s actually interesting and fits the theme.

When you execute Jew-Jitsu, you mash the A button. And when it fires off, a blaze of Hebrew characters fills the screen. It’s quite a sight, and I used it in every combat that I could.

But why is it a surprise? One of the stereotypes of Jews is that we are all weaklings; we’re not fighters (even if the Israelis have never lost a war). But Jew-Jitsu is anything but weak, showing again that it’s poking some fun at something that’s Jewish without being crass or offensive. 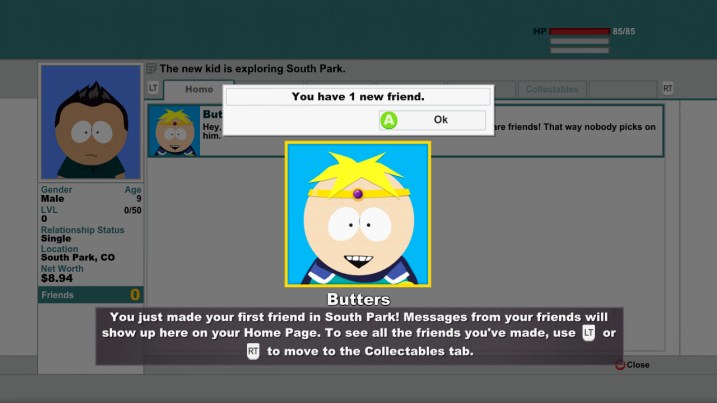 Above: Yes, poor Butters is your first friend in South Park: The Stick of Truth. I know, it sucks.

I expected more off-color jokes as a Jew, and if what I saw during the preview is representative of the full game, playing one is full of laughs and not particularly offensive. No Jew gold around my neck. No Moses-as-MCP Cone. You sometimes hear faint echoes of “Jews, Jews are lame” in the background (a line from the South Park Christmas Special’s Hanukkuh song). But I didn’t see anything that pushed the edge of decency.

The Jew, says Ubisoft rep Jon Miller, is essentially South Park’s cleric class. So it — and the Jewish humor the cartoon’s known for — could draw a lot of players; a lot of role-playing fans enjoy the mix of combat and healing powers that come with priest classes. And I wouldn’t be surprised if they, too, find the Jew to be pretty innocuous overall.

Or maybe I just have a thick prayer shawl.