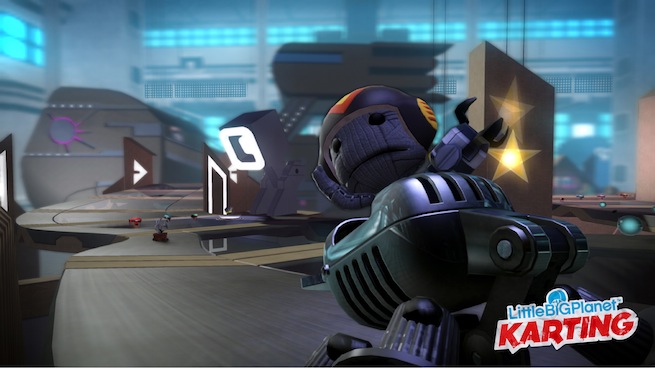 “Dad!” A plaintive cry split the morning; I came to in a panic.

“What?!” I cried, fully expecting that a child was dying.

I shuffled downstairs, bleary-eyed and hopelessly un-caffeinated, to find my nine-year-old son staring at the television screen, a defeated look in his eyes. The message from the PlayStation 3 console said plainly that the game had expired. The beta was over.

We began to grieve.

Over the last week, my son and daughter (aged 11) have played Little Big Planet Karting beta with a holy joy. This is the game we wanted when we purchased ModNation Racers, the karting game created by United Front Games with support from the original Little Big Planet developers, Media Molecule.

Even though the beta didn’t support split-screen local multiplayer, we had a ton of fun racing the computer, creating our own tracks, sack-persons, and karts, and playing through community built racetracks. These are the three pillars of fun that the original two PlayStation 3 exclusive games brought to the console, and are completely present in the Karting beta.

First up, kart racing in the LBP universe is, in the words of my son, “way better than Mario Kart.” While the mechanics are similar, including drift, boosts, and weaponry scattered about the tracks, everything just feels tighter, more integrated. Little Big Planet has a strong visual identity, and LBP Karting makes extensive use of the same materials and design ethos as the original titles. Bottle caps and spools of thread make up the default kart wheels, corrugated cardboard gets folded into various kart body shapes, and the sack people characters wear all sorts of costumes made of what seems to be real fabric, from shiny faux-reptile to an original brown yarn.

Of course, the kids spent a ton of time goofing off on their wardrobe, faffing about with different hats, pants, skirts, shoes, and accessories. I, on the other hand, appreciated the various pre-set costumes, letting me choose a look without a lot of detailed effort. The karts are equally customizable, and the beta let us try a substantial number of them, including rolling cupcakes, hovering UFOs, and sturdy cardboard tanks. 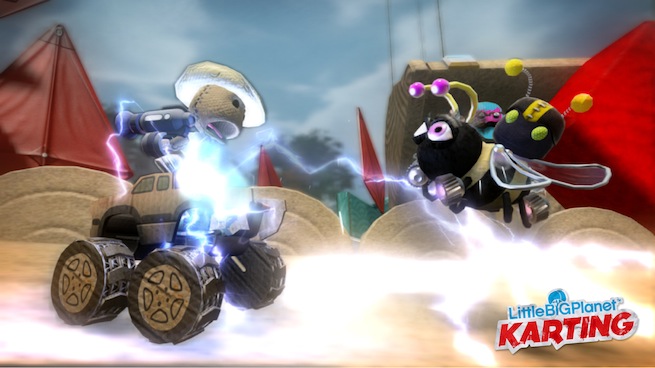 The weapons on the field can be used offensively or defensively, with a strategy of holding onto the weapon to defend against an opponent’s strike. Power ups included a fast forward button, an electric field, and a giant boxing glove, which sped us along the track, knocking obstacles and other racers out of the way. The integration of the look and use of the standard karting arsenal with the gaming universe itself thrilled both of my kids, and they giggled gleefully every time we found a new weapon.

Then we made our own track. Each of us, one after the other, took control of the track painting system and created fun, wacky, and above all usable variations on the kart racing course. The beta included four different environments to create in, though they all felt a little generic. Which works out fine, as the game truly got out of the way and allowed us to make it look and work exactly how we wanted it to. Since we already had a good idea of how to create karting tracks from Mod Nation Racers, this creation interface was a snap. United Front has done quite a bit of iteration on the track-making feature, making things intuitive and easy while retaining the ultimate customizability of a more complex system.

Before the beta ended, my son had made a track full of twists, turns, over- and underpasses, decorated with hills, ravines, mountains like something out of a hallucination. He switched to the Play mode, revved up his engine, and waited for the countdown.

“Oh, dad,” he said, drifting around a particularly tight corner that he’d created himself scant minutes before, “this is so cool.”

Not bad for a beta, right? We’re looking forward to the full retail game when it releases later this year.