When a parent finds a problem with their child’s favorite game, they often don’t have a lot of alternatives. But for one mom, the solution’s simple: Make a game for your kids.

Allison Huynh is an entrepreneur and a mother of two, and when she found out that block-building megahit Minecraft was giving her children nightmares, she decided to do something about it. That’s what led her to create MyDream, an open-world online game that is similar to Minecraft but with more detailed visuals and other key differences. Huynh wants to make an alternative to that megahit that is easier to use (especially online) and that enables players to focus even more on creation.

“My personal goal was to make a game I could enjoy with my kids,” Huynh told GamesBeat. “Minecraft wasn’t meeting my needs. My kids were having nightmares with Minecraft. It started out with it being very creative, but then they started shooting villagers. Villagers were getting killed. I’m a survivor of the Vietnam War, so I have a lot of issues with violence.”

Huynh explains that she is not “against violence,” though she sees Minecraft as a bit too excessive compared to what she wants. When she bought Minecraft because of its creative element, only to realize that its was causing problems for her children, it got her thinking.

She also noticed other problems with Minecraft.

“It is very painful to set up a server so that kids can play with their friends,” said Huynh.

That’s when she decided to start MyDream. She began prototyping ideas, and when she landed on the foundation, Huynh decided to bring in some experienced game developers to help her flesh it out into a real product.

“My 11-year-old daughter always wants to play what the kids in high school are playing,” said Huynh. “Kids always want to be a little older than they really are. If you design a game for kids, kids won’t want to play that game. It’s especially true with user-generated content. You have to have more sophisticated core gaming elements. Minecraft did a great job with that. And so we put together a founding team.”

That’s where Michael Lynch comes in. He is the project lead on MyDream now, and he comes from a traditional game development background at companies like Electronic Arts. He came into MyDream to create something that would appeal to all ages. Lynch plans to accomplish that by creating a gameplay loop that consistently rewards players.

“The goal of the game is to create something where you’re both playing the game and contributing to it at the same time,” said Lynch. “The act of playing the game has a direct impact on yourself, because you’re playing and earning experience and rewards, but you’re also simultaneously creating potential content for others to explore.

“Likewise, if you’re just interested in exploring worlds and you’re not too into the building aspects, you’re still contributing to the game because the act of going out and exploring people’s creations not only rewards you, but it rewards them as well because they’re the creator of the content you played. There’s an interplay between game creator and game explorer that we’re happy about.”

But you can still fight

Violence was what drove Huynh to create an alternative to Minecraft. Specifically, she wanted to avoid violence, but that doesn’t mean her game is completely devoid of it. Players can fight each other and enemies in MyDream, but it is compartmentalized from the creative aspects of the game.

“We believe fighting should be part of the game,” said Huynh. “When you’re building, you’re not gonna have all this violent stuff happen, but within an arena block, people can have fights and work out their aggression.”

An “arena block” enables players to turn on fighting abilities in specially designated zones. If players don’t want to deal with that, they can simply avoid those areas. 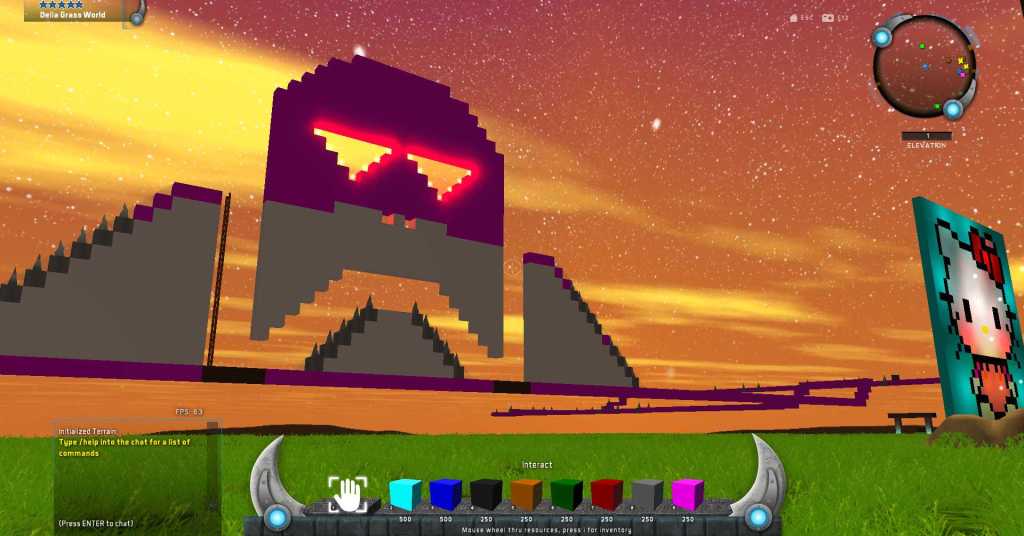 Above: One of the bigger creations in MyDream.

“It’s a minor part of the game, but we do understand that it’s human nature,” said Huynh. “I have a son who loves that battle aspect. But he also loves the questing and the platforming aspects.”

This is the same son who had nightmares because of Minecraft, so we asked whether the fighting in MyDream had caused any problems.

“No, he hasn’t had any nightmares yet,” Huynh said through a laugh. “Except for when he hasn’t done his homework and I don’t let him play.”

Making it easier to play online

Minecraft is a humongous hit largely because it’s such a collaborative experience. Friends can hop on servers and build giant structures together. But setting up a reliable server is difficult, expensive, or both because Minecraft on PC and smartphone doesn’t really have a built-in multiplayer mode. And on home game consoles, you can only join a friend’s world while they are online and also playing Minecraft.

Huynh wants to make all of that easier.

When you create a world, MyDream spins up a server that supports up to 20 simultaneous players. If the creator of the world leaves, other players can continue exploring and building in it without a hitch.

“They’re always accessible, at all times,” said Lynch. “If you created a world at any point, I can join that world and bring it up whenever I want. It’s just that you’re the owner of the world. You get to dictate what happens within that world.”

That means when you leave, you can ensure that your friends cannot come in and destroy your creations.

“That’s part of our philosophy,” Huynh said. “We believe in the individual permissions. It’s not like a public beach. People can see it, but you can build a walled garden, so people aren’t griefing what you’re doing. I know a lot of people who play sandbox games love that feature in our game. You can make this massive stuff and let the public see it and view it and play certain quests that you create — certain loops, adventures, platformers you put in. You dictate what part of the world is a sandbox and what part of it is closed, so there’s a no-griefing aspect to it.”

Delivering on the vision

MyDream started as an idea, but it is a lot more than that now. After a successful Kickstarter project that raised more than $115,000, this Minecraft alternative is now in beta. You can play it right now by downloading the client for PC or Mac. After the Kickstarter, Huynh’s company raised an additional $2.5 million in seed funding to help pay for continued development. She says that the project is close to breaking even.

“We may not even need additional funding,” said Huynh. “That’s exciting.”

Huynh says she is also excited about the support the game is getting from industry experts. Big names are providing their input into MyDream like Richard Garriott, who designed the legendary role-playing series Ultima; and Bart Decrem, who oversaw Disney’s mobile-gaming business until late 2013.

That gives both Lynch and Huynh the confidence that they’ll see this game through until its 1.0 release and beyond.

“We already have the ability to enable you to make fun content in our game,” said Lynch. “Now, it’s just about expanding on that and working out all the bugs and kinks.”

“It’s the next generation of 3D creativity,” said Huynh. “We’re shipping on time. We’re already in early beta. We have a very ambitious game, and it’s already very playable on PC and Mac. And as we get more players, we’re gonna see what they’re doing online, and we’ll give them more of what they enjoy doing.”