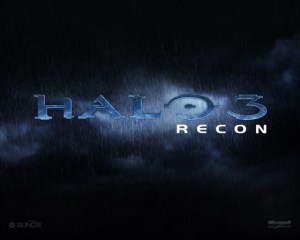 For a long time, Microsoft’s game console, the Xbox, was known best for its violent sci-fi shooting games.

But the hardcore shooter games stood in the way of Microsoft’s ability to cater to the broader audiences that both Sony and Nintendo reached.

While Microsoft tries to break away from that reputation, its also trying to keep the millions of its hardcore gamers satisfied. Today, in Japan at the Tokyo Game Show, it unveiled its latest shooter game: “Halo 3: Recon.” The game will debut in the fall of 2009 and is developed by the newly independent Bungie team. It’s a new chapter in the saga that does not star “Master Chief,” the hero of the first three games. It’s a hardcore shooting game and takes place in the Halo universe. 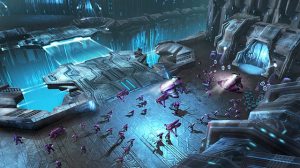 Another game coming in 2009 is “Halo Wars,” a real-time strategy game (played from a bird’s eye view) from Ensemble Studios. The game had a troubled development history, and Ensemble is going to shut down after Halo Wars ships.

These core franchise titles will keep the pressure on Sony. Another form of pressure will come from product bundles. Microsoft said it will bundle two free games “Lego Indiana Jones” and “Kung Fu Panda” with its $299 and $399 Xbox 360 models. And it will bundle six mini Xbox Live Arcade titles with its $199 Xbox 360 Arcade console (which has no hard disk). Bundles sometimes help budget-conscious gamers to come out and buy a console, but they aren’t received as well as price cuts. (Microsoft cut prices in September on its consoles and analysts are expecting a doubling of monthly sales as a result).

Other games coming in 2009 include the much ballyhooed zombie-killing game “Resident Evil 5,” which will be out on the Sony PlayStation 3 at the same time, and “Tekken 6,” a well-known fighting franchise from Namco Bandai. Earlier this summer, Square Enix announced that “Final Fantasy XIII” would come to the Xbox 360, another first and another defection of a once exclusive Sony franchise. Square Enix is also making “Star Ocean: The Last Hope” and “The Last Remnant” for the Xbox 360.

Tekken has never been on a Microsoft console. It shows Microsoft has penetrated the deepest ranks of Japanese game developers who were once loyal only to Sony or Nintendo. While Microsoft’s Xbox 360 console has a miniscule market share in Japan, the company continues to invest in hardcore titles for the Japanese market. Q Entertainment will follow up one of its original Xbox 360 titles with “Ninety Nine Nights II,” a samurai fighting game aimed at hardcore Japanese gamers. Japan has seemed like a lost cause for Microsoft for many years, but it continues to invest for the long haul.

In the meantime, “Gears of War 2” from Epic Games is going to have to carry the 2008 holiday season for Microsoft’s hardcore gamers. Microsoft will also release the new version of Xbox Live online game service on Nov. 19. The service will feature a new “dashboard,” or user interface, that is like flipping through a series of 3-D music albums (think Apple’s Cover Flow). Users can also create their own avatars, or online characters, who will represent the user’s online persona. 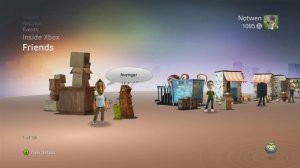 The new console software will move Microsoft much closer to its goal of making the Xbox 360 into a hub for living room entertainment and a gateway to the Internet. The Xbox Live service now has 14 million members, though Microsoft doesn’t disclose how many pay a subscription fee and how many use the free version.

The November launch will usher in Microsoft’s partnership with Netflix, which will provide 12,000 movies and TV shows for gamers to download onto their Xbox 360 hard drives on an on-demand basis. Microsoft will also release its Community Games channel on Xbox Live. That will consist of games created by users using Microsoft XNA game development tools. We’ll see if hobbyists can really create good games.

The company did not unveil a rumored add-on Blu-ray player for the Xbox 360. Other sites have reported this as fact, but Microsoft declined to comment on it. There aren’t too many surprises, at least for the holiday 2008 season. We’ll see if this is enough for Microsoft to hold its No. 2 spot behind Nintendo.