Will Rosellini was once a minor league baseball player. But he found he couldn’t do what other pitchers could do. He retired and began searching for answers. It had to do with his nervous system, and that set him on a 15-year journey to marry neuroscience and technology.

As a video game fan, he was a natural to become the science advisor to the Deus Ex video game series, a near-future tale that depicts the conflict between “natural humans” and “augmented humans” who have electronic body parts. For six years, he was the science consultant on the Deux Ex: Human Revolution and Deus Ex: Mankind Divided (which came out in August) games.

Rosellini is one of the people who is trying to make human augmentation happen, particularly technologies like implantable devices that can help people deal with lost limbs or debilitating diseases. He gave a Ted talk about going “beyond human.” In it, he asked when will humans become cyborgs? To him, the answer is 2027. That also happens to be the year in which Deus Ex: Mankind Divided is set.

Rosellini opened my eyes about how many of the ideas in the video game — which I thought were science fiction ideas bordering on the silly — were rooted in the facts of today’s technological research. For instance, invisibility is possible in Deus Ex and some of the recent Call of Duty games. Rosellini said this cloaking ability is rooted in real research. Maybe the science fiction of Deus Ex isn’t so far from reality after all. (This topic, by the way, is something that we’ll be exploring in future GamesBeat conferences). 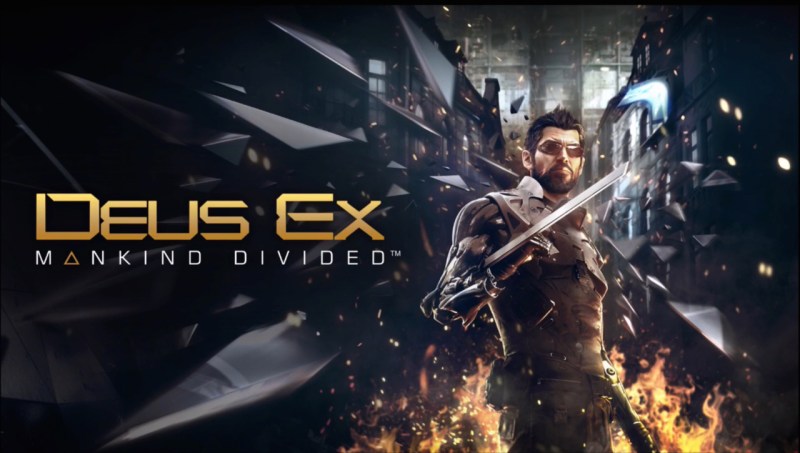 Above: Adam Jensen is the augmented hero in Deus Ex: Mankind Divided.

GamesBeat: It’s an interesting business you guys are in. What was the corporate connection here? I know Open Bionics was doing some 3D printing, and then who else was involved? Razer was drawing some attention to this. I guess the designers were getting ideas from your company? Is that right?

Will Rosellini: Right. The story goes, if I can start in a different spot—in 2001 I retired as a professional baseball player. I was a minor league pitcher who realized he couldn’t throw strikes in the big leagues. I had all the training. I had the same physical frame as all these other guys. But something was different about what I could do and what they could do. It turns out that had to do with my nervous system.

That set me off on a 15-year quest, up through today, on how to think about the nervous system in relation to what I call neurotechnology. From 2001 until now I’ve started and sold three companies. I have another one in progress called Nexeon Medsystems. I got six graduate degrees, all of them centering on using electricity in the nervous system. I’m also a very big gamer. When I heard that the Deus Ex franchise was relaunching, I called the guys and said, “Hey, can I help you? I’d like to be the one that helps develop all the science behind the innovations that would be present in the game.”

I’ve been working on Human Revolution and now Mankind Divided for six or seven years now as the scientific consultant. What we tried to do was map out what would happen over some period of time. Since I’m in an advanced R&D type of company, we already knew what the next 10 years would look like in bioelectronics. It was a lot of fun to guess what the following 10 years might look like.

We’ve been doing clever stuff together at the intersection of what’s real and what’s science fiction for about five years now. What’s becoming really interesting is that one of my companies uses video games and implantable electronics to retrain the brain to learn quickly. The government has started to use that to develop technologies to help soldiers learn languages more quickly with an implantable device. We’re now working on brain technologies that allow you to not only stimulate the brain to alleviate the symptoms of Parkinson’s, but we can record signals from our implants to more closely inform what should be happening with that stimulation. 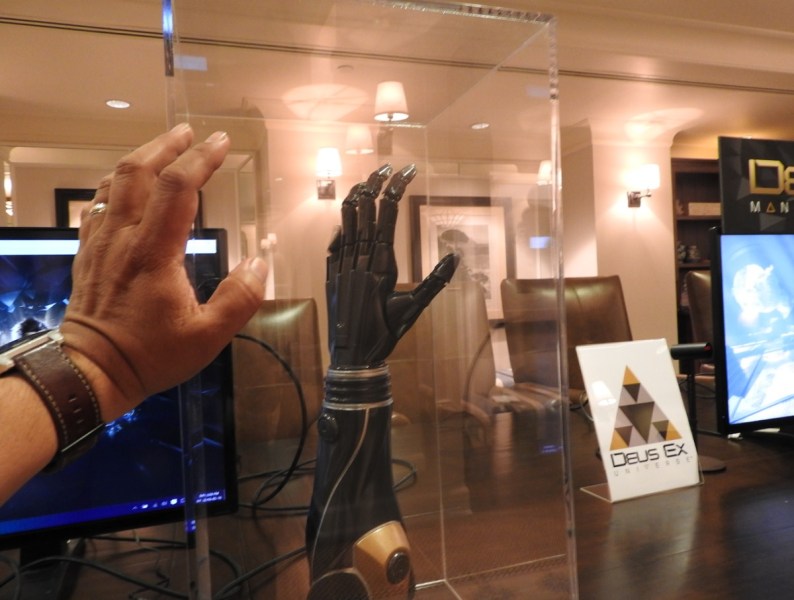 Above: A prosthetic arm based on the Deus Ex universe from Open Bionics, Razer, and Eidos Montreal.

GamesBeat: With your Deus Ex work, how did you establish that contact?

Rosellini: I just called the CEO. He thought I was just kind of a crazy fan at the beginning, but I said, “Look, here’s what I’ve done. I am a crazy fan, but in this capacity I want to help make the game better. Here’s what I think you should do.” I had an initial meeting and knew my stuff – knew the storyline, the franchise, the Deus Ex world. Then I set off doing a bunch of hard work to figure out what would fit in their storyline, how to move the story with the technology.

GamesBeat: I’m not sure I played the original Deus Ex. Did it share the augmentation theme, or did that come with Human Revolution?

Rosellini: Human Revolution is a prequel. The original Deus Ex was about—call it a cyborg or enhanced technology game, and then Invisible War was an extension of that. But they were based in the 2060 to 2070 time frame. It was more about merging with artificial intelligence. Human Revolution was primarily about mechanical augmentations, and Mankind Divided takes place only two years later. We didn’t change the technology stack much for Mankind Divided.