Although you spend the first few hours of NBA 2K16’s MyCareer mode living in a stereotypical after-school special, you’ll still need to know your way around the court.

The dominant basketball franchise from 2K Sports and Visual Concepts features a pseudo-story mode to its popular career mode. A scripted and unalterable storyline from film maker Spike Lee takes players through life as a high school and college basketball phenom and forces us to rush through a 10-game rookie season in the name of drama.

You’ll still need to get yourself to the top of the NBA heap, however — especially now that 2K16 is available as a free download for PlayStation Plus members. And that’s where I come in.

This guide will show you how to create a dominant NBA big man (just as GamesBeat did last year with NBA 2K15). I found that playing an athletic center with a well-rounded game is the best course of action due to a major change in the pick-and-roll system that hamstrings guards and wing players.

A pick-and-roll is a common basketball play in which a center or power forward uses his massive body to screen, or block, a smaller defender for a moment, allowing the big guy’s teammate to drive to the basket.

As a ball handler in the old pick-and-roll system, you could slam the sprint button (R2 for PS4 players) right as the big man set the screen to race by your defender. Now, R2 doubles as a command for the big guy to abandon the screen and run to the basket, which ruins your pick-and-roll.

Playing as the behemoth setting the screens gets us around that problem. Let’s do it.

Creation is pretty straightforward. Make a center with prototypical height and weight — somewhere around 7 feet and 260 pounds. The height will make rebounding and defending a breeze. You could go taller, but it will limit your player’s agility. Your ability to move will be important, so no taller than 7 feet.

Go with the inside scoring focus. You will never — ever — be shooting from outside of 10 feet with this build. You won’t ever need to. Most of your points will come off free dunks.

The Spike Lee storyline is a fun change of pace, but it throws a pretty big wrench into your created character’s career. He will not really be able to grow and thrive until year two, when the tale is over.

However, you can set yourself up on an easier path to success.

As a 7-footer, you will be unstoppable in high school and college. You can easily score every point, grab most rebounds, and rack up a few blocks per game. I suggest joining an NBA team that needs a center.

For instance, I intentionally played badly during one college game to drop my player’s draft stock below the top 10. The Indiana Pacers, a team without a great center, drafted me at No. 11 in the first round and played me quite a bit during my rookie season.

This isn’t mandatory, but it helps. During my first few MyCareer playthroughs, I had a point guard and a shooting guard that each played about 5 minutes to 10 minutes per game. A rookie season where you average 6 points per game will tank your career statistical averages.

After your rookie season, you will select whichever team you want. Pick one that needs a center. 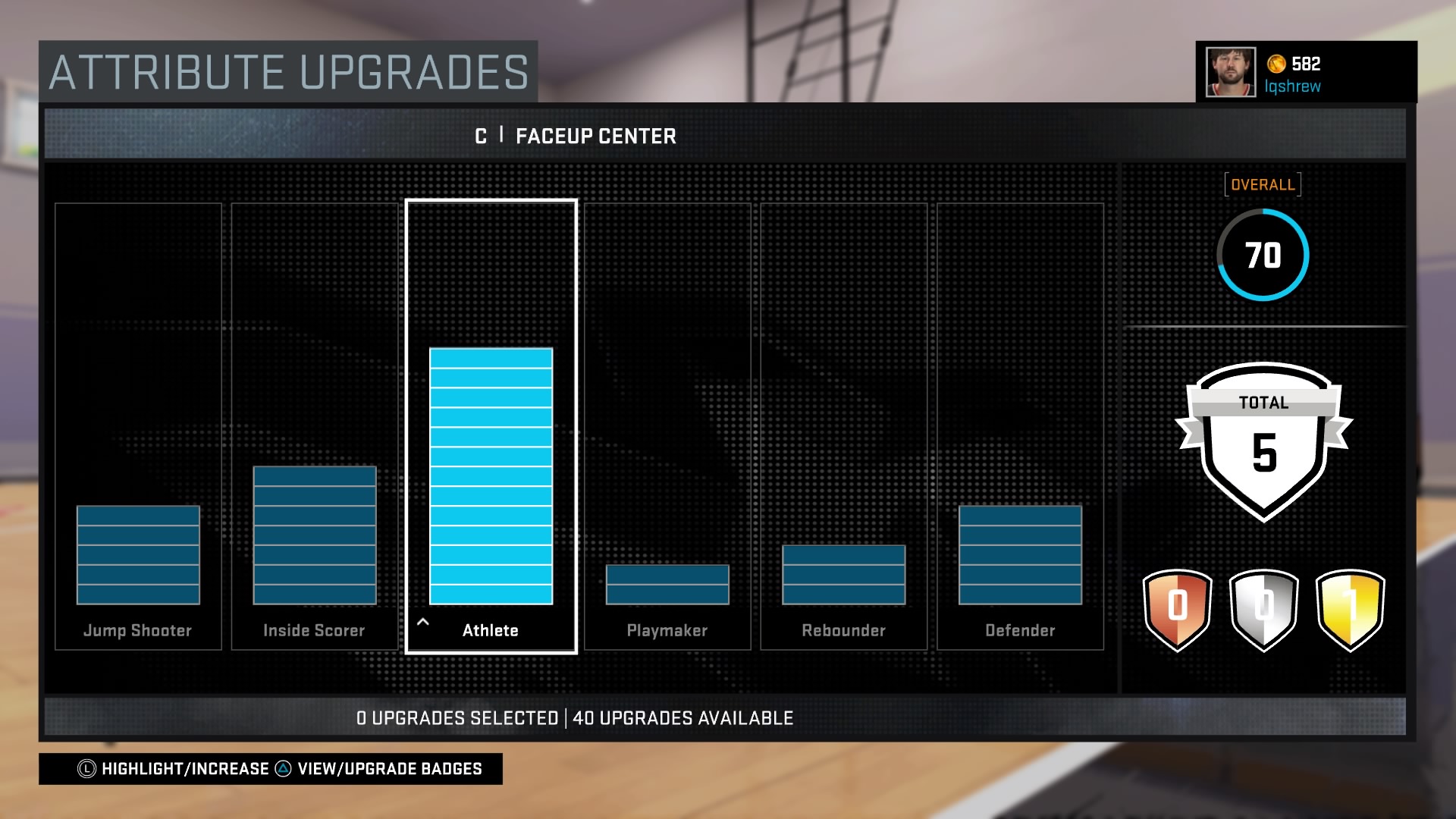 Above: This is what your attributes should look like by the 10th game of your second NBA season.

The key to this build is leveling up the athletic skill set. It is far cheaper than any of the offensive skill sets, and your size will get you all the rebounds and blocked shots you need. You have no reason to waste virtual currency, the points earned while playing, on those attributes.

Athletics will help you move around the court and stay in the game for longer, and it improves your screening and dunking abilities. Virtually all of your points will come from setting hard screens and sprinting to the basket, so being able to do both well is important.

The second priority is inside scoring. You will eventually need to score from the post, and inside scoring can help you do that. It gets a little pricey in the later rounds, but it is necessary for when good defensive teams stop your pick-and-roll game.

Add a few points into outside scoring and defense along the way. Although I forbid you from shooting jump shots, the outside scoring skillset increases free throw ability. You’ll need that. The defensive attribute buffs will keep you from being destroyed by the opposing center.

Points in rebounding aren’t really necessary. You are big, and timing your jumps properly (see below) will net you plenty of boards.

Do not even look at playmaking. You won’t be dribbling or passing.

Finally, download the NBA 2K16 smartphone app. The daily bonuses and pick-and-win modes take seconds to do and rack up tons of free virtual currency. The card game and other modes are also pretty fun in their own right.