Square Enix’s mission is to spread happiness across the globe with unforgettable experiences. The Japanese company has done that with the Final Fantasy series, which has sold more than 115 million copies worldwide since its debut on the Nintendo Entertainment System in 1987. The company released its latest installment, Final Fantasy XV, and I happened to be there in Tokyo for the Hollywood-style launch. I toured of the company’s headquarters in the urban jungle of the Shinjuku ward in Japan.

The headquarters is housed within multiple floors of a 25-story building. On the ground floor, I met public relations official Misa Tokunaga, and she took me into the $1.9 billion company’s lobby. We walked a short way to a waiting room with a bunch of plush toys from Square Enix’s Dragon Quest series, one of its most iconic role-playing brands.

Then I stepped into a motion capture studio with 68 cameras.

They were pointed at a stunt actor in a black mocap suit. Kazuyuki Ikumori, general manager and chief creative director at the company’s Visual Works division, told me through a translator how the company used the studio, which was built four years ago when the company moved into the latest headquarters. He said Square Enix did a lot of the motion capture for Final Fantasy XV.

The images from the actors are captured and immediately translated into data that can be used to animate 3D characters such as a medieval knight. I could see the knight move in real-time as the actor moved across the floor.

The director of the game can move around the actor with a handheld camera, and then use multiple angles in the finished product.

Ikumori said the system saves a lot of money in terms of art production, but it also allows the creators to be more productive and creative, because they don’t have to lose a moment of time when they’re inspired to change or redo something. Ikumori has worked on games, such as Tomb Raider, Final Fantasy XIII-2, Final Fantasy XV, Deus Ex: Human Revolution, and Hitman Absolution. He has also worked on films, including Final Fantasy: The Spirits Within, and Final Fantasy VII: Advent Children. It was nice to get a little time with him.

After we toured the mocap studio, we headed upstairs. The hallways didn’t have as much art as I’ve seen in Western game studios. I entered the main floor, where pictures weren’t permitted. It was a vast area with hundreds of white desks. The windows looked out upon a spectacular view of Tokyo from more than 20 floors above ground. The desks were separated into various sections, but were not exactly cubicles. The walls between each desk were lower than what I’ve seen in other studios, and occasionally I saw desks with blinds over them so that an artist could see a monitor better.

The setup was made deliberately that way to encourage communication. There were small bulletin board barriers, but all of the several game teams on the floor shared the same general space. I saw Hajime Tabata, game director for Final Fantasy XV, sitting at a desk of his own. He runs Square Enix’s Business Division 2, but he had the same type of desk as everyone else on the floor.

It was the day after the big launch of Final Fantasy XV, but he was there at work, leading the team on its next project, which likely includes downloadable content (DLC) for the game. There were more vacancies among the desks than usual, since many people were taking time off. The Final Fantasy team took up the bulk of the floor, but it also had a lot of room for the Dragon Quest team. There were hundreds of people in the same space. 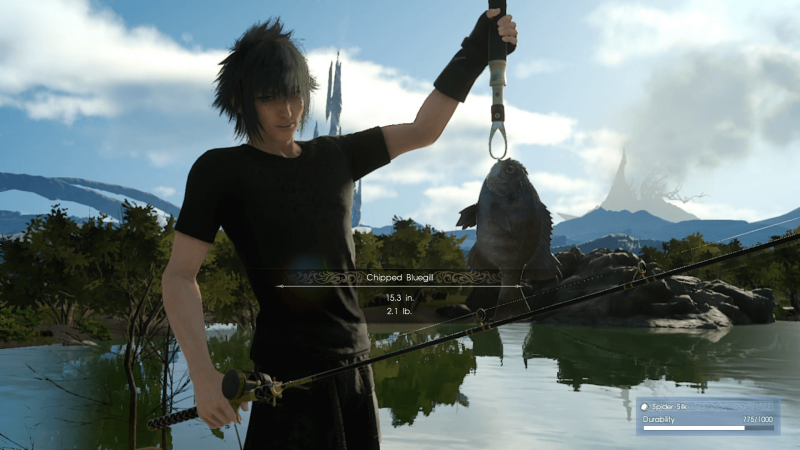 Above: Caught another fan.

We also went downstairs and saw more offices for other functions of the company. There were some glass offices for meeting rooms and leaders, but not nearly as many as I’ve seen in Western companies.

We also took the elevator up to the top floor where the cafeteria was. It wasn’t a huge space, but it had some pretty bamboo-like decorations. The cafe was decorated with plush toys and other souvenirs from Square Enix games. You could buy bentos for lunch and get all sorts of gourmet coffee, including a cup with art of a game character in the foam.

Then we went downstairs and walked to the other side of the building, where there was a smaller white egg-shaped building. This was the Square Enix Cafe, which offered a place to sit and eat for coffee and other snacks. It also featured a bunch of plush toys and other souvenirs for fans. And there was a museum-like room with a bunch of highly realistic game character toys, including several of the main characters of Final Fantasy XV. Square Enix is so good at making some of these toys that it makes a lot of them for other game publishers as well.

I walked out of the cafe and back to the streets of Tokyo. Here’s a photo gallery of Square Enix’s headquarters as well as images from the launch of Final Fantasy XV.