Riot Games has spawned an empire from a single game, League of Legends. The free-to-play multiplayer online battle arena (MOBA) game has become hugely popular. It had more than 32 million active monthly unique players as of a year ago. That number is wildly out of date, but Riot hasn’t disclosed new numbers. At that time, 12 million players were playing every day, and the more than 5 million players were online at peak times. 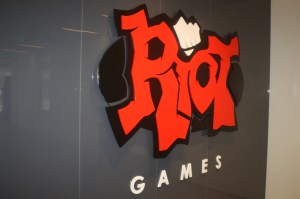 Whatever the numbers are now, League of Legends is still doing great almost four years after its launch. And Riot Games has grown to more than 800 people in Santa Monica, Calif. The company was named as No. 3 on the list of the best medium-size places to work for in 2013, based on the Great Place to Work evaluation service.

On Glassdoor.com, employees have rated the company very highly. The company has created a flexible workplace with good pay for its employees.

Riot can afford to do this because its players don’t mind spending real money for virtual goods inside League of Legends. Players duel with each other in five-on-five multiplayer matches. And the game is so popular that it has become a huge e-sports community with tournaments that draw millions.

Rivals such as Blizzard’s Heroes of the Str and Valve’s Dota 2 are aiming to knock League of Legends out of the top spot in MOBA games. But League of Legends can still clearly support a big company. What is unusual about Riot’s owners is that they are sharing the wealth with their employees.

Vlad Cole and Nicola Piggott of Riot Games PR staff game me a tour recently. In the lobby, it’s clear that everything revolves around one screen. Monitors display community comments inside League of Legends and they sport (wildly inaccurate) stats that are always changing. 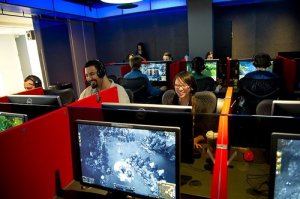 Above: A faux PC Bang inside Riot.

The place is well-lit and rises a number of stories upward. We passed by a Network Operations Center where I wasn’t allowed to take pictures. The Rioters, as employees are called, love their company and its leadership. Brandon Beck, who co-founded the company with Marc Merrill in 2006, has a 100 percent positive rating from employees on Glassdoor.com, and the company’s overall rating is 4.4 out of 5. That’s unusual, considering that China’s Tencent, a huge internet company, acquired majority control of Riot Games for nearly $400 million in 2011. Wisely, Tencent has left Riot alone and given it more resources.

One Riot employee said on Glassdoor.com, “Everyone here is immensely passionate about what they do, and if you aren’t learning something every day, you must be in the wrong office. The company takes ridiculously good care of us, and tries every step of the way to make sure we’re engaged culturally, intellectually, and socially with the industry and each other. It’s by far the best place I’ve ever worked.”

Rioters set their own hours and have an unlimited amount of paid time off. Surveys show that employees don’t consider their work at Riot to be “just a job.” Riot pays 80 percent of Rioters’ healthcare costs and offer 200 hours of training a year.

Since Rioters work long hours, the company has cool perks and services. Last year, the whole company took a weekend trip to Las Vegas and partied in the Palms Casino Resort’s Hugh Hefner suite. This year, the trip was to the Dominican Republic. Twice a month, the company has game nights. It has on-site kickboxing, yoga, and Zumba sessions. Massage therapists visit twice a week.

There are offices in St. Louis and New York City. Some employees work remotely. There are big offices in Dublin, Seoul, Istanbul, Sao Paolo, Taipei, Sydney, and Moscow. About three quarters of the staff are under 34. Men are 85 percent of the staff. The average annual salary of a software engineer is $113,191, not counting a 100 percent match 401(k) plan and the healthcare benefits.

If you’re looking for a job at Riot, you better play League of Legends. And this story offered tips on how to snag a job there. The competition is tough, as there are 29 applications per opening.