The Oculus Touch controllers debuted a year ago today, enabling players to eschew a traditional gamepad while using the Rift headset. In VR, this has become an expected way of interaction, whether you’re using the Touch or HTC Vive controllers. To mark the occasion, Oculus has released the beta version of Rift Core 2.0, an update to the Rift user interface that streamlines navigation.

Looking back at the 2016 and 2017, Oculus vice president of content Jason Rubin says that VR developers have made strides in working out the key issue in VR: locomotion. It’s still a big hurdle moving forward, but some games have come up with clever solves in the last year and a half.

Rubin calls out Crytek’s The Climb and Ready at Dawn’s Echo Arena as two games that implemented hand-based movement in their virtual environments, which reduces motion sickness and “tricks your brain into siding with your eyes over your inner ear.” Ubisoft designed Eagle Flight so that it restricts peripheral vision when you approach objects, which also improves the comfort of moving around in VR.

Oculus made a big push in 2016 to get as many titles as possible on the platform. This year, it focused on building out its library with quality titles.

“I think we’ve achieved that now. We have over 300 titles in the store that support Touch,” said Rubin in a phone call with GamesBeat. “There’s even more if you talk about gamepad titles on top of that. We have 2,000 titles total on the Oculus platform. There’s a lot of stuff in the store and a lot of it is high quality.” 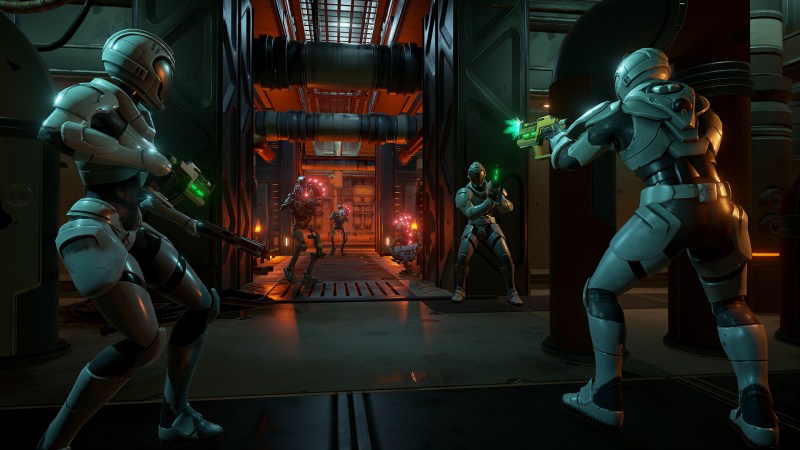 Above: A scene from From Other Suns.

One such game is From Other Suns, a science-fiction shooter from developer Gunfire Games. It’s a studio founded by vets from Vigil Games, which developed Darksiders and Darksiders 2 as well as Chronos, a role-playing game in VR. From Other Suns is an ambitious undertaking — a roguelike where you’re a spaceship pilot in a procedurally generated universe. You can fight enemies as a single player or sync up with two friends for co-op action. Gunfire designed it for longer play sessions, similar to traditional non-VR games.

“We really try to hit that mark with something you can sit down and enjoy,” said Gunfire’s design director John Pearl in a phone call. “It’ll be comfortable. You’ll be able to play it for hours, as much as you can, with the headset on. We try to shoot for those types of experiences versus more of a technical experience, or something that’s just 30 minutes or an hour long. We want to give you that whole game experience.”

An open beta gave Gunfire a lot of needed feedback, which they used to keep tweaking the movements. Eventually, instead of a one-size-fits-all solution, they opted to create as many options as possible so that folks could customize their movements in the game.

Gunfire also spent a lot of time on its user interfaces. Everything had to be intuitive, avoiding the complex for a natural way of interacting with the environment. It had to find a way to present information in a “real world, tactile” fashion. It settled on the solution of enabling players to access a minimal menu of options — selecting a shield or weapon, for instance — with a flick of the wrist.

“That’s where it started coming around to: What’s always available to you?” said Gunfire’s president David Adams. “Well, your arms are always available to you, so we can start putting interfaces on your arms. How we broke up the interface, between what’s on the bridge and what’s on your arm and what’s on all the terminals and all the stations, that was a constant process of trying something and failing and trying something again and failing until things worked.”

From Other Suns also drew from pop culture knowledge that already exists, such as ideas from science-fiction movies.

“You see movies and you think, how would this operate?” said Gunfire’s development director Ben Gabbard. “How would you really go through things if you were on a ship in a Firefly episode and be able to relate to it? Would you look at your wrist? Would that make sense, that communication piece? How would that operate? We just continued to percolate on that as we moved forward.” 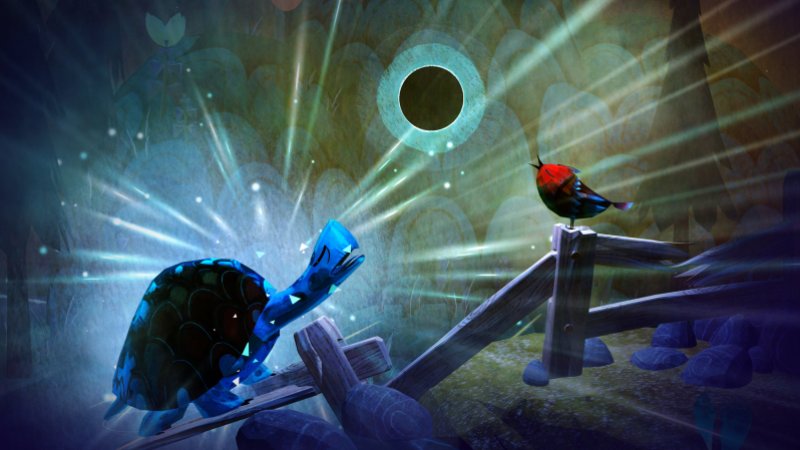 Above: Luna from Funomena. Oculus believes diverse creators will help steward the future of VR.

Rubin says that looking toward 2018, players will start seeing bigger titles from Oculus Studios, the company’s in-house team that funds first-party games. In 2017, the plan was for Studios to fund a major title every month. Next year, it will be focusing on taking more time and funding “bigger, deeper” projects. And it expects that other developers out there will be tackling larger, more ambitious titles as well.

“Developers who wanted to work longer on a product have now had the hardware long enough to make it,” said Rubin. “But more important, developers, especially developers that work across platforms, can expect to make real money from the VR business. There’s a lot of Sony [PlayStation VR]s out there. They’ve made that very public. There’s also a good number of PC VR systems out there. With Microsoft’s entry, that’s just going to grow. If you make a nice cross-platform product, you can expect to address a reasonably sized and quickly growing marketplace in 2018.”

Increasingly, players are able to experience VR titles from triple-A developers, such as Bethesda’s Doom VFR for the Vive and The Elder Scrolls V: Skyrim VR for the Vive and PSVR. Fallout 4 VR will be coming later this month. Multiplayer titles like Star Trek: Bridge Crew and the popular Rec Room support cross-compatibility between the Rift, Vive, and PSVR, making it possible for folks to experience it no matter which headset they own. And at the Oculus Connect conference in October, Oculus announced that it is working closely with Titanfall developer Respawn Entertainment on a new VR game for 2019.

But Rubin offers a note of caution when it comes to porting blockbusters to VR. He’s wary of adapting a game to VR instead of building it up as native content. Some experiences, such as simulators, work intuitively in VR, but games like first-person shooters or third-person action games won’t necessarily work.

“When you try to bring all those conceits and all that baggage through the translator of not starting from scratch, there isn’t poetry sometimes on the other end,” said Rubin. “I’m dubious. I understand the drive to do it. The budgets of those titles, the amount of assets, it’s massive. But when you do the translation you get mixed results.”

Rubin predicts that social will be a big part of “the magic of VR,” a stance that Oculus’s parent company Facebook is also committed to. Facebook Spaces, for instance, is virtual hangout spot for friends.

“Someone will make the first [massively multiplayer online game],” said Rubin. “We really don’t have one in VR. That’s going to be a killer app. We haven’t even seen what that looks like, but I guarantee, MMOs are going to be unbelievably successful in VR. There are so many genres we haven’t dug deeply into. I think it’s impossible to know what’s going to work and what’s not going to work in the long run.”

Rubin also says that VR is a chance to bring in more diversity into the games industry. It would be tough for indie developers to disrupt the pantheon of triple-A giants such as Electronic Arts, but a new medium means everyone is figuring things out at the same time. It doesn’t exactly level the playing field, but it’s a start. Some of VR’s biggest hits, such as Owlchemy Labs’s Job Simulator and Against Gravity’s Rec Room, are by indie devs.

“Those are great opportunities for new voices to become senior leaders in the future,” said Rubin. “Because of that, and because of Oculus’s desire to have diverse voices, we have been focusing on trying to get more people to make more games, a more diverse crowd to make games and other things. Additionally, indie developers are always creative.”

“For me, the next big hurdle is the level of—how compelling is the content?” said Pearl. “There’s been a lot of experimentation. There are lots of different ways to tackle locomotion. People have put a lot of time into how you manipulate objects, how you shoot guns, how you do melee. There’s certainly more of that to be done. The next frontier, especially from a gaming perspective specifically, is taking all that information and creating larger, more compelling experiences for players.”

Of course, locomotion and getting VR headsets into more homes are still challenges. Gabbard says that tethered headsets remain off-putting, and this is an issue that Oculus is hoping its Santa Cruz headset will help solve. And VR still requires a lot of PC horsepower to run. Rubin says that all of these challenges will be overcome in the long run. For now, it’s an incremental process.

“Again, it’s stepping stones. Nothing is going to be an utter revolution,” said Rubin. “That’s just not the way the games business or the technology business works. It looks like that sometimes from the outside, because people aren’t paying attention to the first steps. They only see the big loud vivid thing that gets it. But we’re taking these little steps with every title. It’s all headed in the right direction.”

By all accounts, VR has slumped into a gap of disappointment. However, developers seem to still remain optimistic and ready to tackle the challenges ahead.