Giant Squid is prepping to release its first game, Abzu, for the PlayStation 4 and PC later this year. The studio’s creative director is Matt Nava, who is known for his beautiful artwork and previously worked at thatgamecompany as art director on award-winning PlayStation titles Flower and Journey.

Abzu is somewhat similar to Journey in that it centers around free exploration and silently guides players on a journey of discovery. The difference is that it’s an underwater diving game set in a vast ocean world.  But it’s not a scuba simulation, says Nava, so you don’t have to deal with any air gauges or instruments. Instead, the focus is on fluidity and the overall exploratory experience. While Giant Squid was careful to cover up any story beats at a recent preview event, we do know that the diving is a metaphor — the character is also diving into herself, her mind, and her past. 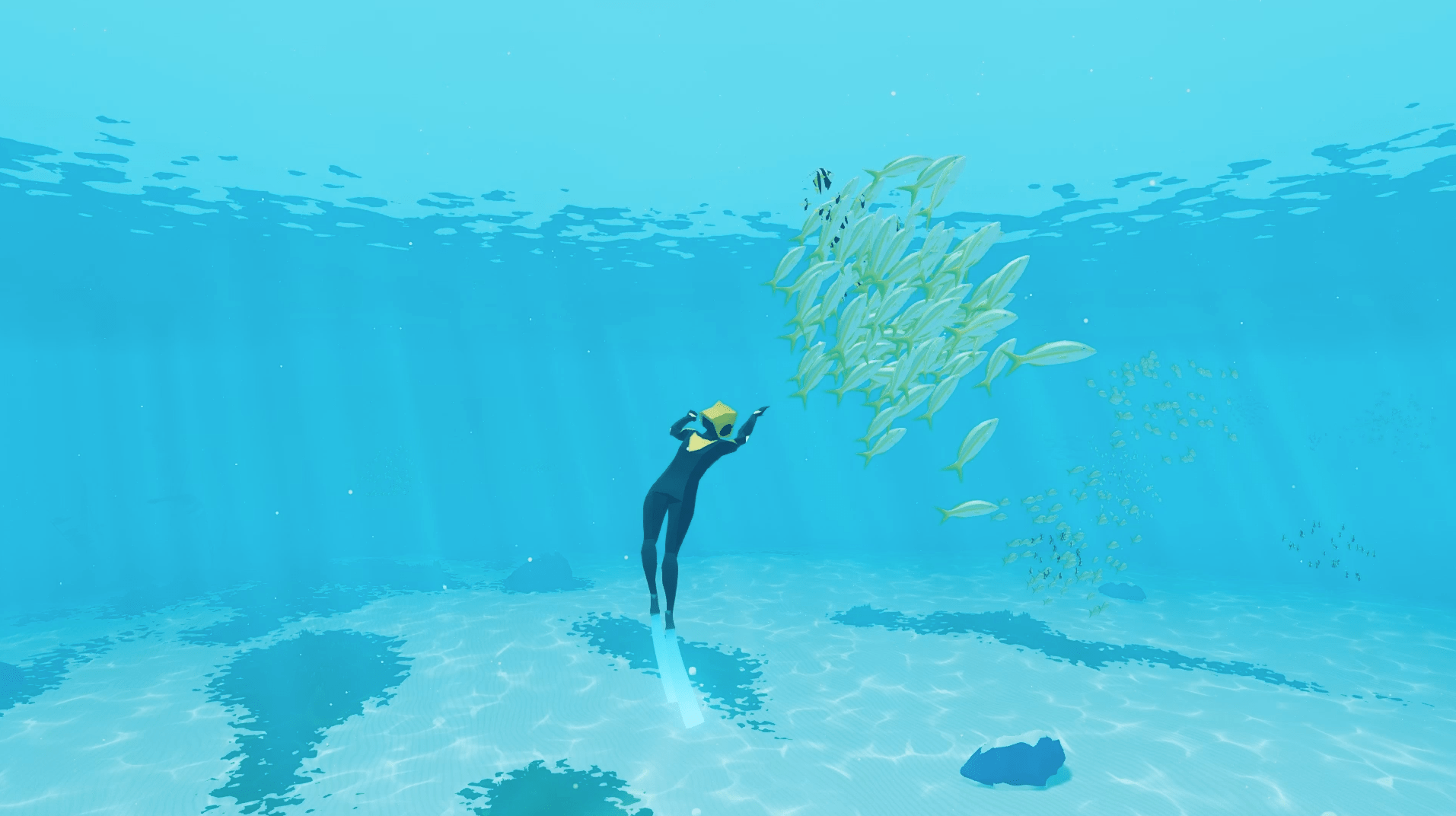 Above: Fish and other creatures will interact with the diver.

The player steers the diver through this underwater environment, swimming through masses of kelp and alongside schools of exotic fish. A core element of the gameplay is a connection with the creatures. Nava said that instead of the limited interactions you’d typically see with animals in a game, such as hunting and killing, Giant Squid wanted to find something more respectful and meaningful for the players to do with the creatures.

“We allow the diver to reach out and touch these creatures, and ride and school with them in the hopes that this will allow player to develop a more genuine connection,” Nava said.

Judging from a play session I had at a pre-E3 event, that connection feels surprisingly real.  A lot of that relates to the simulations for the sea life that were put in place. Abzu features a dynamic ecosystem with tens of thousands of fish being simulated, each aware of each other and the player. They react in a vary natural way, and appear from the depths as if they were living creatures. The simulation is so detailed that a food chain has been implemented. The plant life also sees heavy simulation work — Nava said that close to a million leaves of kelp are rendered.

Giant Squid lead engineer Brian Balamut told GamesBeat that a haze effect increases the realism that much more, and that the limited view of the depths somehow makes the experience both more calming and immersive. But that feature was disabled for this preview, unfortunately.

Some careful work on the diving itself also helped with the connection to the diver. The player is able to freely position her anywhere underwater, with no real limitations. Nava said that the team looked at other water and swimming games and decided that they didn’t like how some would limit pitch rotation. So they reviewed flight simulations as inspiration for the movement instead. Above: Swimming with schools of fish is as nice as it sounds.

The swimming control is distinct and takes a bit of getting used to, but it soon feels both graceful and powerful, and really adds to the feeling of moving in water. Balamut explained that the team had initially developed a way to flip to be able to dive and walk on the ocean floor, but found that no one wanted to do that. But it turned out that the flipping motion clued them in on some ideas for movement,  which really helped shape Abzu’s unique feel.

But even more remarkable than the feel or the technology is the look — Abzu is beautiful. The look is initially simple and somewhat muted, but journeying through underwater caverns to uncover sand dunes which lead to huge rooms filled with coral. The sea life is equally lovely, and is as varied as you could imagine. I’ve never been diving, but being among the coral and seeing how the sunlight filtered down onto the sea life made me feel like I was for the first time. We were told the demo is only a small taste of the full experience.

From what was shown, Abzu has the potential to capture the imaginations of gamers just as Journey did. It has some of the same vibe and magic, but has just as much in the way of unique twists and features. It could be the next big indie hit.