The first reaction I had when I saw Abzu’s trailer was, “What the heck is this game about?”

Abzu was one of the more mysterious announcements to come from Sony’s press conference at this year’s giant Electronic Entertainment Expo tradeshow in Los Angeles. The only information we knew then was that it’s a PlayStation 4 exclusive made by two of the talented minds behind Journey: former thatgamecompany artist Matt Nava and composer Austin Wintory. Nava is working on Abzu under his new independent studio, Giant Squid.

I had a last-minute opportunity to talk to Nava at E3. He didn’t have anything else to show aside from the game’s trailer on a laptop — it isn’t due until 2016 — but from our conversation, I learned that the one minute video clip actually says a lot about his new game.

I suggest watching the trailer [embedded below] as a refresher before reading his comments.

Abzu appears somewhat aimless. The video doesn’t present any clear goals beyond just exploring the ocean. According to Nava, the team did this on purpose, partly because the game is still in its early phases of development, but also because they didn’t want to give away too much. 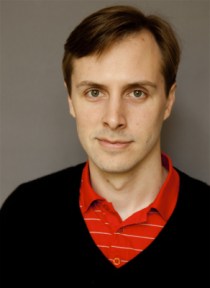 “What we’re trying to do at this point is to keep the details of the story a secret,” said Nava. “The broad strokes, or the concept of the game, is that you play as this diver who goes deeper into the ocean, discovers secrets, interacts with the environments and the creatures. And what we’re trying to do is really capture the magic and the majesty of being in a new environment, having those kinds of interactions with these creatures.”

Like Journey, Abzu is not going to rely on traditional storytelling mechanics.

“I think the narrative of the game is all going to be told through the visuals and the audio. There isn’t gonna be any dialogue or text on the screen,” said Nava. “What we’re trying to do is build this — what we’re calling — this universal myth, trying to reach down into this collective subconscious layer and get this kind of story that resonates with everybody.”

In crafting its own universal myth, Giant Squid looked to other myths for inspiration. It’s borrowing the term “abzu” from the ancient Mesopotamian culture, where “ab” means water or ocean and “zu” is knowledge or transcendence. Together, they roughly translate as “the ocean of wisdom.”

“The abzu in these ancient myths is this life-giving force. Kind of like the yin and yang,” said Nava. 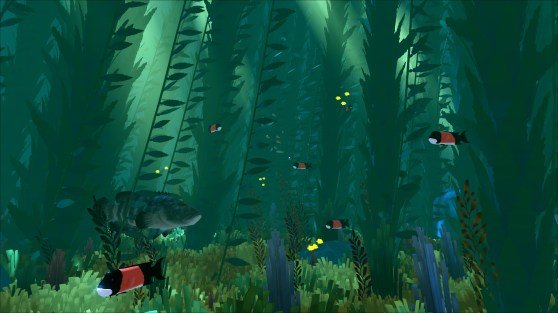 Above: Just some of the sea life you’ll find in Abzu.

It’s not a diving simulator

“I was recently certified as a scuba diver, so getting in the water and experiencing that environment and playing with these fish and everything — there are so many interesting creatures in the ocean,” he said. “So one thing we’re doing is basing all the fish and sea life you meet on real creatures. Taking their actual behaviors and condensing them down into really interesting interactions with the player. There is gonna be an element of reality to it. But where the game will take you … I think we will be able to take you somewhere really magical.”

I told Nava that the first thing that tipped me off about this was the diver. With the glowing marks on his suit and his oval-shaped helmet, the diver doesn’t look like he came from our world.

“That speaks to one real important part of the game: It’s not a simulator,” he said. “It’s not about scuba diving; it’s not about air tanks and air gauges. It’s about the experience and the magic of being in the environment at the expense of all other things. That’s really the focus of the gameplay that we’re designing. How do you capture that, and not have to worry about the realities of being underwater, just that magic?”

A ‘meaningful way’ to interact with the sea creatures

Giant Squid wants to immerse players in the ocean’s ecosystem, where all kinds of fishes, sharks, and whales dwell. One point Nava brought up was the brutal way we usually treat animals in video games: We kill and skin them for supplies, or to unlock new upgrades for our character. I told him I noticed this as well, especially in games like Far Cry 3, the Tomb Raider reboot, and Assassin’s Creed IV: Black Flag.

“That’s not really how I want to interact [with animals],” said Nava. “I want to have a more meaningful, more respectful, more thoughtful interaction with them. That’s one of the fun challenges that I’m looking forward to on this game: How do you create a sense of connection that is different [from what we’ve seen]?” 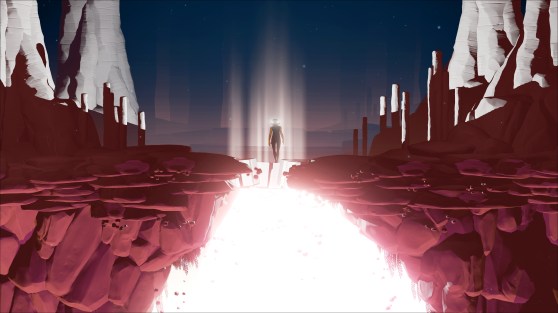 Above: The last shot of Abzu’s trailer.

What’s going on in that last scene?

The trailer ends with a shot of the diver standing inside of a cave and being lit by a harsh red light. But it’s not the kind of cave you think you’d find under the sea. Actually, it’s not clear if you’re even underwater anymore.

“You have this ambiguous, ‘Where are you?’ [feeling],” Nava said of the teaser. “I think we can really take the game to interesting, surreal places with so much unexplored things in the ocean.”