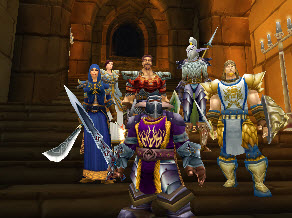 The video game industry isn’t falling off a cliff, thanks to franchises like World of Warcraft, Call of Duty, and Guitar Hero.

Those are the video game brands that are driving Activision Blizzard’s revenues and earnings. Today, the company said it beat expectations for both in its first quarter ended March 31.

The company had said three weeks ago it expected to beat its financial targets. This means that the game industry as a whole isn’t suffering from the downturn as badly as it looked in March when sales fell 17 percent compared to a year earlier. Rather, the industry seems to be separating into winners in losers.

Earnings excluding the impact of deferred game sales and other charges, non-GAAP earnings were $111 million, or 8 cents a share. Analysts were expecting non-GAAP earnings of 5 cents a share for the period. Robert Kotick, chief executive, said the company’s big three franchises helped sales grow better than expected and that the company is now raising its estimates for the remainder of the year.

For the year, Activision Blizzard now anticipates GAAP revenues of $4.3 billion and earnings per share of 24 cents, compared to its prior outlook of $4.2 billion in revenues and 22 cents per share in earnings. If it does so, it will likely edge out Electronic Arts as the biggest independent game company. It is also much more profitable than EA, which is losing money. In the second quarter, Activision Blizzard expects GAAP revenues of $1.0 billion, and GAAP earnings per diluted share of 10 cents a share.

The company said that its Guitar Hero title took market share from Electronic Arts’ Rock Band during the quarter, even though overall music game title sales were down. Guitar Hero has now generated more than $2 billion in revenues.

A couple of other music-related titles, aimed at expanding the company’s reach beyond Guitar Hero, are DJ Hero and Band Hero. At the same time, the company says it’s reducing costs where possible. It also expects retail prices of video games to hold through the fall in spite of the recession.

The company has $3 billion in cash. In the quarter, the company appointed Dan Rosenzweig as the head of the Red Octane division that makes the Guitar Hero games. The company also bought 7Studios to make more music-related games.

Another big change was the shift in its World of Warcraft operator in China from The9 to Netease. That transition is complicated but crucial to improved earnings, as analysts believe Activision Blizzard will generate more earnings from the Chinese version of WoW as a result. Mike Morhaime, head of Blizzard Entertainment, said the change will help the company maintain quality and be in a better position to “capture the growth” in this market. Online games such as WoW are generating $100 million a month in revenue.