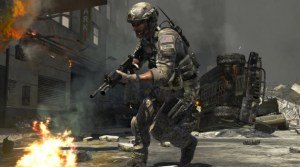 Activision Blizzard chief executive is ready to burst out of the video game business and take over the entertainment industry.

In an analyst event ahead of the company’s Call of Duty XP extravaganza in Los Angeles, CEO Bobby Kotick said the company has “never been better positioned as a company.” He noted the company has had one of the best records for the past 20 years among all U.S. public companies, having created $16 billion in shareholder value since 1991. Shareholder returns have outperformed the markets for the last five, 10 and 15 years.

Kotick said markets like China and Brazil have become real markets, and there is plenty of room for audience expansion in existing markets.

“For more than 20 years, with disruptive technologies, increasing capital requirements, new business models, and complex audience tastes and interests, we’ve always managed risk and navigated change better than any of our competitors,” he said. “Even in a challenging economic environment like last year, we had our best year ever.” 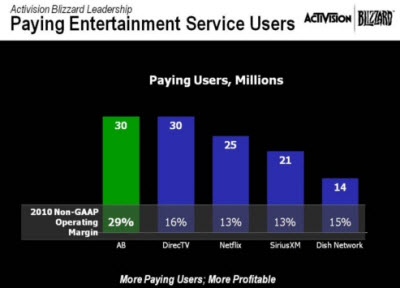 Kotick said the management team is disciplined enough to avoid costly mistakes (well, not all of them, as EA is fond of reminding them, since they canceled the Tony Hawk and Guitar Hero businesses), speculative investments, and distractions.

“Knowing how to pursue dreams and take chances, but doing it with realistic expectations, is core to the Activision Blizzard culture,” Kotick said.

Kotick said digital revenues have grown for three years in a margin accretive manner. In the past 12 months, digital revenue was $1.7 billion. Digital revenues have higher margins today, and Kotick expects them to increase into the future. That is giving the company the ability to invest more than others in the game industry who are “chronically unprofitable.”

The expansion of broadband around the world, the maturing of new game markets, the sales of smartphones and tablets, and the growth of the mobile internet will fuel growth, Kotick said.

He said the company is poised for audience growth and margin expansion as it pursues big franchises such as Call of Duty Modern Warfare 3, which debuts on Nov. 8. The company’s marketing blitz starts today with the Call of Duty XP event, which features a tournament with a $1 million prize and an event over the next several days that will be attended by more than 5,000 people. Call of Duty Modern Warfare 3 will go head to head with Electronic Arts’ Battlefield 3 game in the hot multibillion-dollar first-person shooter market.

“We have had the biggest, most committed audience of players that we have ever had,” Kotick said. “We have a pretty good track record of navigating risk over a long period of time.”

As for the XP event, “It’s our way of giving back to our Call of Duty players,” Kotick said.