The company said non-GAAP (generally accepted accounting principles) revenues for the third quarter are $1.57 billion, up 58 percent from $990 million a year earlier. Non-GAAP earnings per share are up 145 percent from a year earlier. That’s pretty impressive, considering the company’s big games won’t make a real impact until the next reporting period. Big releases during the quarter included World of Warcraft: Legion and continued success from the team-shooter Overwatch, Hearthstone: Heroes of Warcraft digital card game, and King’s Candy Crush Saga on mobile.

“This quarter we again over-performed our plan, delivering record third-quarter revenues of $1.57 billion, up almost 60 percent and earnings per share of 49 cents a share, more than doubling year-over-year on a non-GAAP basis (as redefined),” CEO Bobby Kotick said in a statement.

“We continue to see enthusiasm from our global audiences for our key franchises including Call of Duty, Destiny, Candy Crush, and World of Warcraft, plus our newest franchise – Overwatch, which after only about four months had already reached over 20 million players and has incredible player engagement. Looking forward, we expect continued momentum from all of our growth strategies, especially our esports initiatives and our integration of in-game advertising.” 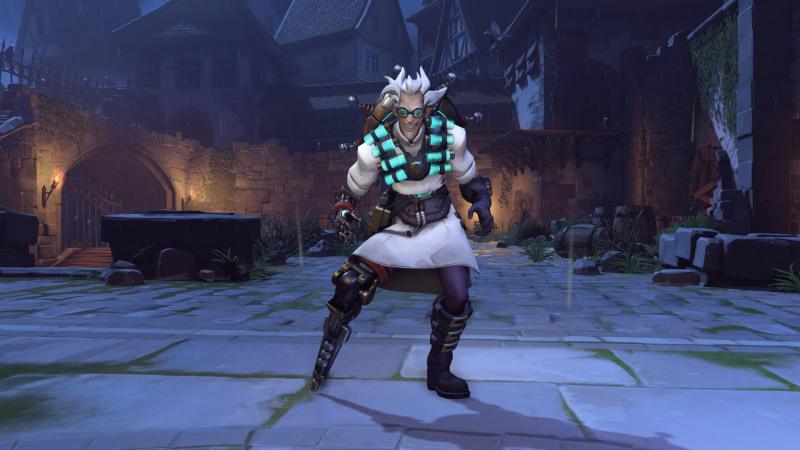 Above: Junkrat’s Overwatch outfit for Halloween.

In the fourth quarter, Activision should see ore revenue from the launch tomorrow of Call of Duty: Infinite Warfare, the latest in a series that has generated more than $15 billion to date. For the fourth quarter, analysts expect earnings of 73 cents a share on revenue of $2.4 billion.

Like rival Electronic Arts, Activision Blizzard is no longer emphasizing non-GAAP figures, which excludes one-time items. That can be confusing. Under GAAP, revenue from certain online-enabled games is deferred for as long as companies think players will use them — six months to nine months. Activision will provide deferral information to calculate non-GAAP figures.

The company said that it had 482 million monthly active players, down from 491 million in the previous quarter. They played more than 10 billion hours during the third quarter.

Blizzard had the biggest quarterly online player community in its history, with 42 million monthly active users, up 25 percent quarter-over-quarter and 50 percent year-over-year. This reflects the continued success of Overwatch and the launch of World of Warcraft: Legion. Blizzard has more than doubled its monthly active players in just two years thanks to launches like multiplayer online battle arena Heroes of the Storm and the market-leading digital card game Hearthstone: Heroes of Warcraft.

On August 30, 2016, Blizzard launched World of Warcraft: Legion, which sold-through 3.3 million copies on day one, matching all-time records achieved by previous expansions, and ranking among the fastest-selling PC games ever.

On September 20, 2016, Activision and Bungie released Rise of Iron, a large new expansion for the Destiny universe. The expansion included fresh new content in the form of a new location, a new Raid, a new Strike, additional quests, gear, and a new game mode, which drove an increase in monthly active users quarter-over-quarter.

King’s monthly active users of 394 million were down slightly this quarter. King had three of the top-20-grossing titles in the U.S. mobile app stores for the 11th quarter in a row.

Activision Blizzard’s esports network, Major League Gaming, in partnership with Facebook, recorded about 50 million views, growing 67 percent quarter-over-quarter. At peak, a record 11 million users were reached in a single day. From September 2 through 4, 2016, Activision hosted Call of Duty XP, its largest fan event ever which included the culmination of the Call of Duty World League Championship. More than 1,000 teams participated in the Call of Duty World League during the 2016 season, which recorded 121 million views.

On October 16, 2016, Activision released Skylanders: Imaginators, and for the first time in toys-to-life history, fans are able to create their own digital Skylanders from scratch. Blizzard’s tenth BlizzCon event debuts on Friday in Anaheim, California.