Activision is announcing the Skylanders: Trap Team video game as the latest installment of a series that has generated more than $2 billion in revenue through a clever melding of toys and video games. The newest version has innovations that change the motto of “bringing toys to life” by reversing it and “bringing life to toys.” 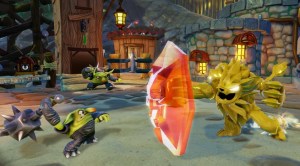 The big video game publisher has a lot at stake in Skylanders: Trap Team, as the series has sold more than 176 million toys in the past few years, even in the face of some serious competition from Disney Infinity, another toy-game hybrid. Rather than waging brand warfare as Disney has done, Activision hopes to capture the imagination of gamers — and trap even more dollars in the consumer’s wallet — through gameplay innovation.

Activision’s developer Toys for Bob is creating dozens of characters who can leave the video game and become embedded in talking toys, or move from the virtual world of the game to the real world of the toy. Players can make this happen by trapping the character and then transferring them digitally to a toy crystal made of the a magic substance. When you plug the crystal into the “Portal of Power,” (the device that transports a toy into the game) the character speaks through a new speaker in the modified portal, and the character is stored in the electronic memory of the toy crystal.

It’s a clever trick in a series that is known for mixing virtual and physical entertainment. Previous games in the series included last year’s Skylanders: Swap Force, Skylanders: Giants in 2012, and the original Skylanders: Spyro’s Adventure in 2011. In those games, you could buy a physical toy and put it on the portal, which would transfer that character into a playable virtual character inside the game. When you saved your game progress, your character would record the progress in the electronic memory of the toy itself.

The new game comes from original developer Toys for Bob, an Activision-owned studio based in Novato, Calif. Each one had a twist on the digital toy genre that kept the kids and their parents coming back for more. The innovations in the toy-game combo were the key to Activision’s rise as a major digital toy maker and Skylanders’ ascent as one of the top 20 video games of all time.

“We said we wanted to continue the innovations as we designed this,” said Jeff Poffenbarger, executive producer of the game, in an interview with GamesBeat. “You bring toys to life by putting a physical toy on a portal so that is shows up in the game. We are reversing the magic now and bringing life to toys.”

The Trap Team has its own plot related to the evil designs of familiar villain, Kaos. He seeks to take control over the Skylands by releasing the prisoners of the legendary Cloudcracker Prison, a fortress made entirely out of the substance Traptanium. Kaos blows up the prison, releasing the most-wanted villains and blasting the shards of Traptanium to Earth. The Portal Masters now have to recapture the 40 villains by imprisoning them in Traptanium Traps.

The player’s task is to trap those villains. I watched Poffenbarger capture a really annoying villain named Chompy Mage. The mage sends little “chompy” blobs with sharp teeth to attack the Skylander character, which in this case was Snap Shot. Snap Shot, who is one of 50 new characters, used his weapons to attack the chompys. The mage tried to counter in the next round by turning himself into a bigger chompy attacker. But Snap Shot prevailed and trapped the mage. The Chompy Mage shows that the campy humor — which appeals to both kids and adults — is still a big part of the game.

As the mage screamed “Noooooo!,” he vanished from the screen and was transferred into the toy crystal trap on the portal. And then the mage’s voice disappeared from the television and then came booming out of the speaker in the portal. The mage was thus trapped inside the real-world toy. As you play further, you can plug the crystal in and then put the villain back into the game. Only this time, you can use the mage to attack other enemies. He’s like a Pokemon that you’ve captured for your own use as you try to clear out the rest of the enemies.

All of the previous 150 toys still work with the latest game. But the game has a new Traptanium Portal, which has LED lights and the built-in audio speaker. So that means parents are going to have to open their wallets again.

Above: Skylanders chainsaw attack by the Shrednaught

Asked about the competition with Disney Infinity, which will also get a big overhaul this year, Poffenbarger said, “We call this persistent disruptive innovation. We are constantly innovating. We are not following anyone’s lead.”

For a $75 starter pack, you get a new portal, two characters, and two traps. The traps have read/write memory, so you can store villains on them. In fact, you can store more than one villain in a trap. However, you can only have one villain playable and active within a trap. You can enjoy a lot more replayability by fighting through different stages of the game as either a villain or a Skylander. You can tag-team the game, swapping out characters by switching the toys or toy traps. So you can use a character Chill Bill to freeze some villains and then swap in Snap Shot to shatter them into pieces.

“You get to experience new characters in the same game environments,” Poffenbarger said. “Any Skylander can capture a villain, but the new Trap Masters are better at it.”

Each trap is based on a different fundamental element in the game. The villains are attached to different elements, so you need different traps to capture the villains. You can even play as Kaos in some part of the game.The new Skylanders include new Trap Masters, new core Skylanders, and re-posed Skylanders who are fan favorites. You can find Traptanium deposits in the terrain and use it for purposes like blowing up obstacles. 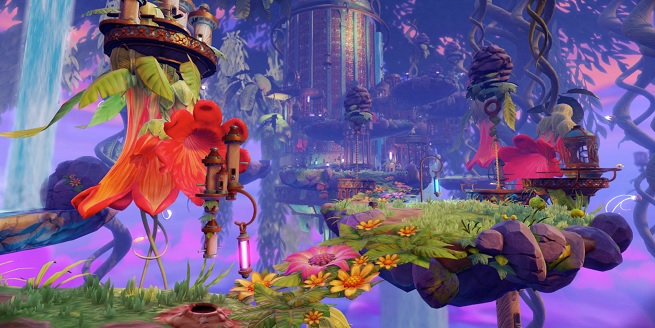