Does it feel like you’re seeing a bunch of new Call of Duty advertisements these days?

It’s not your imagination. Call of Duty: Ghosts launches on Tuesday amid some of its most serious competition in a while. Electronic Arts launched its Battlefield 4 first-person shooter last week to generally better reviews than critics have given the series in the past. The game has an average score of 86 out of 100 on review-aggregator Metacritic.

The latest ad, pictured below, addresses how players often call in sick at work to play Call of Duty releases on the day they come out.

Activision has launched a series of trailers based on Call of Duty: Ghosts gameplay, humorous live-action scenarios, and the general pop culture buzz centered on the title. One of the commercial even includes actress Megan Fox.

The marketing emphasizes how “it’s Call of Duty time,” and it targets people who are casual fans of the shooter genre. Those commercials/trailers are getting millions of views. But gamers are going to have a lot of reasons to spend their money on other things this year, not the least of which is the still-popular Grand Theft Auto V, which has shipped more than 29 million copies to retailers.

Fans will also have to dish out money for the Xbox One or PlayStation 4 consoles, which are debuting with a number of new titles. Eric Hirshberg, president and CEO of Activision Publishing, told us in an interview earlier this year that Activision realizes a lot more competition exists for consumer dollars this fall and that the company has to spend more on sales and marketing to get its fair share of players.

You’re seeing that strategy play out now with the ubiquitous advertising. 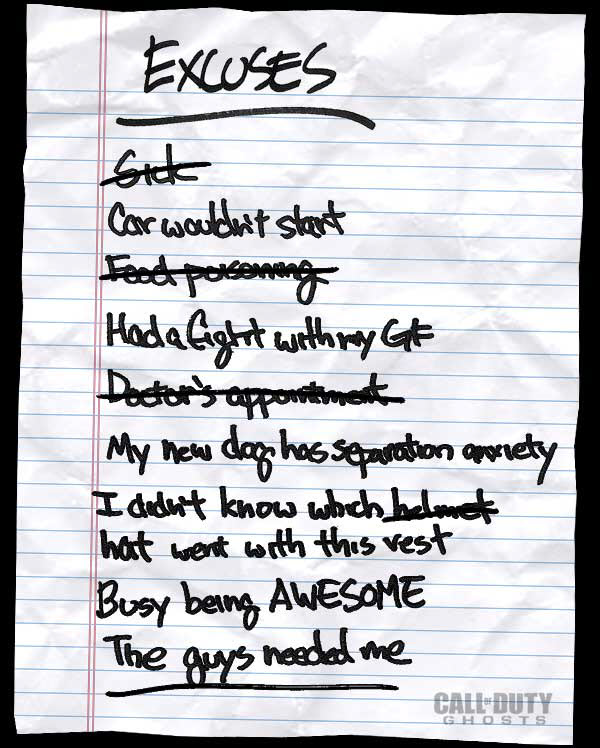 Above: Call of Duty excuses ad.