Eye-tracking has emerged as a critical component of augmented reality and virtual reality systems, but doing it with cameras is expensive. So AdHawk Microsystems is launching eye-tracking that uses sensors that don’t use cameras.

AdHawk’s MindLink technology uses micro-electromechanical systems, or MEMS, which are tiny chips that handle mechanical functions. AdHawk’s MEMS will result in light wearable eye-tracking technology that can be integrated with AR glasses or VR headsets, said CEO Neil Sarkar in an exclusive interview with GamesBeat. The company has built the sensors into its own glasses prototype that researchers can start using soon.

The Android or PC-tethered prototype glasses are available for presale today. Delivered in the form of traditional eyeglasses that can be worn all day, the AdHawk system is faster, lighter, and more power-efficient than competitive offerings, while delivering highly accurate, medical-grade data, he said. The idea is to unlock the connection between the eyes, the brain, and the world around us. 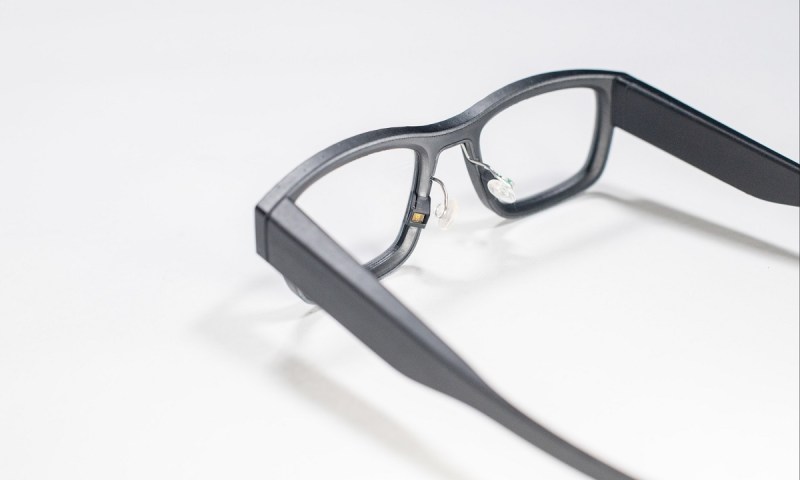 Sarkar started AdHawk Microsystems in 2017 in Kitchener, Ontario, in Canada. He had a background as a chip engineer and studied MEMS in graduate school. The sensors he studied have actuators that can operate on sub-nanometer levels of precision, and they scan a beam of light across your eye. He spun the company out of the University of Waterloo with funding from Intel Capital.

“We had this solution for eye tracking that didn’t require any cameras or any heavy-duty processing,” Sarkar said. “You can actually operate at very high speeds with low latencies and very little compute. So [it] doesn’t require much power. That made it very suitable for AR and VR products. And that’s really been the bread and butter for the company.”

AdHawk powers immersive experiences in AR and VR by enabling faster gaming, more effective training, and effortless user interfaces. The company is now augmenting its eye-tracking technology for clinical research where traditional practices have relied on qualitative measurements of eye movement as indicators of neurological health.

“Today, we really think of ourselves as a full stack eye-tracking solutions provider, because roughly half our company has software, working on everything from the embedded system, all the way up to applications that make use of eye tracking,” Sarkar said.

The company has 35 people, with a fabless semiconductor model, which means it designs its components and has them manufactured by contractors.

“We’ve been integrating our eye tracking solution into products like VR and AR headsets,” Sarkar said. “But because of the timelines, for some of the products that will ship, we don’t want to have to be at the mercy of a [manufacturer] for our tech to actually see the light of day. So we decided to just launch our own product. So that’s what the MindLink is — lightweight glasses that have eye tracking.”

Above: AdHawk Microsystems uses MEMS to measure your eye movements.

AdHawk replaces cameras with ultra-compact MEMS that eliminate power-hungry image processing, thereby improving speed and energy efficiency by more than twice its nearest competitor, the company claims. Once the patient is wearing the AdHawk MindLink glasses, they launch the app and tap “start tracking.” The system is so fast it can accurately predict where a user will look next — up to 20 milliseconds before their eyes fixate — and gaze is captured 500 times per second with better than one degree of accuracy, according to AdHawk.

In addition to increased speed and precision, MindLink offers flexibility because it is not constrained by bulky equipment that can only be used in a lab environment. This means that physicians and researchers can now conduct eye-tracking assessments in more settings than ever before, including a doctor’s office, in the field, or even in a patient’s home.

Under a microscope, as you can see in the video, a micro mirror scans a beam of light around in two axes. “That’s really what we have done to replace cameras,” Sarkar said. “And so we don’t need to take 100 pictures every second.”

For games, eye tracking is important because it shows what the player is looking at. There’s no need to render imagery that the user can’t see, and so it saves on processing power. And rivals such as Tobii have made a decent business by showing where professional gamers look on a screen, so that amateur gamers can learn how to play fast-action games better.

“You could also start to use applications where you target using your eyes instead of a mouse or a controller,” Sarkar said.

In terms of applications, Sarkar believes the tech will enable new research connecting eye movement to neurological and ocular health. That’s why the company is targeting its kits at researchers in health care and academia. AdHawk is supporting researchers at the University of Waterloo and the University Health Network.

“There are a lot of correlations between the signals we measure and what’s going on in your mind,” Sarkar said. “That’s probably the most exciting thing.”

AdHawk’s eye-tracking glasses can be worn comfortably to precisely measure eye movement, pupil size, and head movement using an integrated inertial measurement unit (IMU) sensor. As a result, researchers can collect data that will help them study anxiety, ADHD, concussions, and epilepsy, while improving the assessment of cognitive load and reading challenges. Data will also assist in researching the progression of neurodegenerative conditions like Alzheimer’s and Parkinson’s disease.

The device could also be used to track whether a driver is paying attention in traffic.

“The sampling frequency of an eye-tracking system refers to how many times per second the position of the eyes is registered by the eye tracker. A greater sampling frequency improves a researcher’s ability to estimate the true path of the eye when it moves,” said Elizabeth Irving, professor with the School of Optometry and Vision Science at the University of Waterloo, in a statement. “Until now, a higher sampling frequency came at a higher cost because it required more expensive cameras and more power. This is what makes AdHawk’s system so special — they have found a way to deliver mobility, quality and speed — all without sacrificing affordability.”

Kits are expected to ship within six to eight weeks of the presale closing date. The device is not cleared by the Food and Drug Administration.