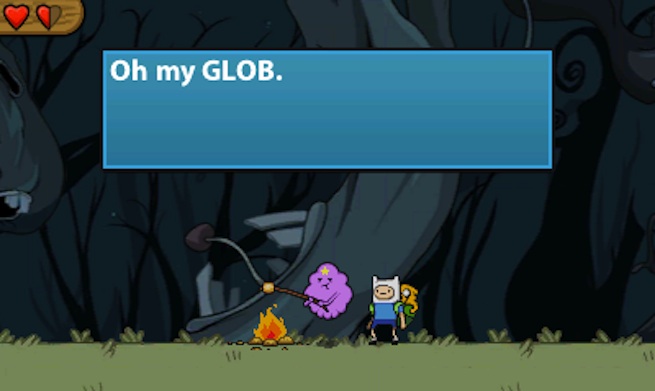 When one of the first enemies you encounter in a game is a cute bunny rabbit with a knife strapped to its head, you know you’re in for one weird ride. Despite being set in a postapocalyptic world filled with magic, princesses, vampires, and sorcerers, this isn’t Dungeons & Dragons or any other type of role-playing game you’ve ever seen.

This is Adventure Time.

Cartoon Network’s Emmy-nominated animated series follows a young human boy, Finn, and his shape-shifting brother, Jake (who happens to be a dog), as they both try to rid the world of evil. Thanks to developer WayForward Technologies and D3Publisher, Adventure Time: Hey Ice King! Why’d you steal our garbage?!! — a ridiculously long name that I both love and despise — continues Jake’s and Finn’s comical romp through the Land of Ooo on the Nintendo DS and 3DS later this year.

If you haven’t laughed at Lumpy Space Princess and her valley girl tantrums, stared at the TV in confusion whenever the Korean-speaking Lady Rainicorn shows up, or cringed at just how creepy the Ice King can be, don’t worry. Though the game contains a ton of references to the show, it’s also designed to lure in those who might be unfamiliar with the source material.

“The game itself is very accessible, and the humor is funny even if you aren’t familiar with the characters,” said James Montagna, a director at WayForward. “So if you’re not necessarily familiar with the show, I think the game is a great way to get primed on everything, because a little bit of everything [from the cartoon] is presented in the game somehow. So if you’ve never heard of Adventure Time, the game would be a great starter…. It’s a great introduction to what [the show] and the Land of Ooo is all about.”

The unending quest for loot

The universal language that all RPGs share is loot: those shiny pieces of treasure or armor you find in dungeons and combat. In Adventure Time, the loot you pick up act as temporary power-ups when you’re exploring or duking it out with odd-looking fiends — situations where the game adopts a side-scrolling perspective, as opposed to the top-down view of its overworld (as pictured below). 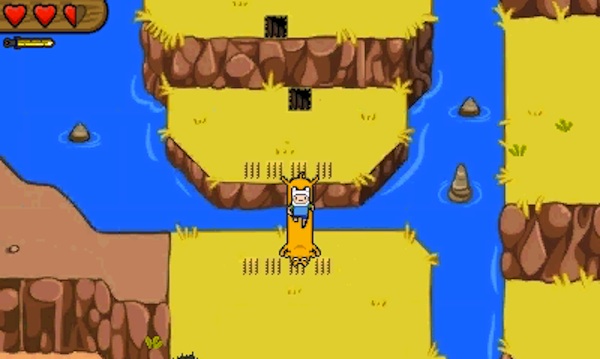 Loot can come in the form of Baby Shoes, which will make you run faster for a short amount of time; Beauteous Wings, an actual item from the show, that lets you jump higher than normal; or just something completely different from a well of over 20 power-ups.

Food also sits in your loot screen. Adventure Time features an extensive combination system where you can mash food together in hopes of increasing its healing properties, like when you combine ketchup and a cheeseburger. But if you add something like maple syrup to cupcakes, Finn will think it’s too sweet, decreasing its effects.

Both food and power-ups were plentiful in what I played of the Grass Lands, one of the four large areas in the game, in my 20 minute demo. Similar to old-school RPGs, you walk from one location to the next using an overhead map; except for places that are inaccessible because you haven’t learned a specific ability yet, you’re free to go wherever you like.

I really enjoyed walking into the towns, where some nonplayable characters from the show reside. They give you humorous anecdotes about their lives, along with tips on what to do for your next quest. 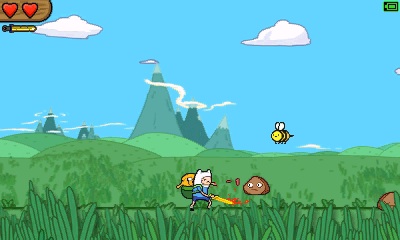 Battles occur whenever you bump into a ghoulish figure on the overhead map or when you transition to a different area of the continent. As Finn, you start out with hand-to-hand combat (you later find your sword), where you can punch, kick, or slide using the directional pad and the Y button. And since Jake tags along with you, you can use him for a ranged attack by pressing X, where his arm will stretch and punch enemies from several feet away — he’ll learn more moves as you progress.

The power of your attacks, the length of your health bar (represented by hearts), and your movement speed can all increase with the help of Wizard Stars scattered throughout the Land of Ooo.

Aside from showing an interest in interviewing various luminaries from the video game industry, Adventure Time creator Pendleton Ward is working closely with WayForward to make sure Hey Ice King! Why’d you steal our garbage?!! reflects the same sense of zany humor as the show.

“We send builds to Cartoon Network, and we’ll have Pen review them,” said Montagna. “And Pen will play them, and then give us lots of feedback. He always likes to draw us little pictures in the email like of what he’s expecting…. It’s really unprecedented to have the creator of something so hands-on in the development [process]. And so we feel very fortunate to have his involvement. This [really] is Pen’s game.” [Laughs]

From the obvious references — the bottom touch screen that serves as your management hub is BMO, a walking and talking video game console that lives with Finn and Jake — to the more obscure, Ward and the developers are intent on making a game fans can be proud of.

Just for fun, I asked Montagna how this game fits into the cartoon’s canon, which is otherwise made up of a series of 11 minute standalone story vignettes. The director only had this to say:

“That’s an interesting one…there are so many alternate reality theories and stuff, I’m gonna leave that one alone [Laughs]. But the game is definitely exploring the Land of Ooo in an entirely new way. You can almost think of it as an extended episode.”