Above: Some characters from previous chapters of The Wolf Among Us return to provide aid. Kinda.

GamesBeat: The Fables series here with The Wolf Among Us — Is it picking up on that in some way? Is it doing things differently?

Connors: It’s funny, because people who play it have said that it feels very familiar, like Walking Dead, but it’s completely different. That was what we were going for – building out a model, building games in a way of making games where things felt very familiar in the way you did things, but each piece of content is completely unique because the writing is different, the characters are different. Wolf Among Us has proven that that was a good way to go. Now there are people who like these experiences and like that they can experience them in a different world and a different story.

GamesBeat: You showed those videos of people crying when they were playing The Walking Dead game. When did you start to pick up on that kind of thing, that it was that powerful?

Connors: We felt it in the room, when we were creating the game. We would read the scenes and everyone in the room would be quiet. People would be touching the corner of their eye, and that was before there was any graphics or any acting. We knew, at that moment, that it was powerful. As our cinematics team and animation team came on and added more emotion to it, it got more and more powerful. I think it was the end of episode two where we realized that people really cared about these characters.

GamesBeat: Parts of the engine are a little funky. The feeling of walking around isn’t quite so close to real life, or to an action game like Call of Duty. Do you find that players don’t mind that? Or do they wish that some parts of the game could be a little different, like the movement rate?

Connors: We’re always focusing on the things that bring the most value to the product. A super interesting exchange between characters, something that’s well-written and has a lot of context and consequence associated with it, is the most valuable part of the performance. Walking from point A to point B is kind of secondary to that.

But with that said, every time out, because we do so much content, we’re always improving. We’re always hearing what people are saying. We address issues as we feel like, “Okay, this is getting in the way of what we’re trying to present.” We definitely put our effort into the parts of the game that entertain people the most, that they most care about.

In Call of Duty, you’re running through that world. You have your gun out. You’re very much that soldier and you have to feel like that soldier. That’s different than feeling like Lee, which is about what you say to Clementine in the situations you get in, things like that. We’re always working to improve, but we’re always focusing on the things that make Telltale games feel the most like Telltale games. 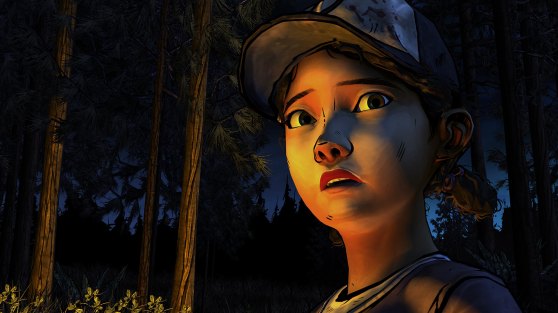 Above: The Walking Dead: Season One

GamesBeat: When the story and the narrative are strong, that compensates for moments where it maybe isn’t the smoothest 3D virtual experience.

Connors: It’s not perfect in all of its presentation. I feel like Telltale games, with the amount of detail we put into animation and the amount of work we put in to make sure everyone in the space feels alive and feels appropriate—It’s more than anyone else in the business. It takes a lot of work to make that scene feel alive, to make it feel like, when I’m saying something to you, the people over there are paying attention and care. Or the world is alive around me. You’re hearing what I’m saying and I can tell from your face how you feel about what I said.

I feel like we do more than triple-A games, making sure that’s all there and working. It’s not always as fluid as those games, but it allows us to get more coverage, to cover the game in its entirety with animated sequences.

GamesBeat: From this success, what have you learned? What are some of the ambitions in front of you?

Connors: The biggest thing we’ve learned is to believe that, if it’s compelling and interesting, if the characters are interesting, people are going to be engaged. Once they’re engaged, then it’s your responsibility to figure out how to get them invested into the experience. How do you let them get their will into the product? That’s always the challenge, because a great writer can write a completely compelling scene, but if the player’s not involved, it’s not a Telltale experience. It’s not an interactive experience.

Pulling it back and saying, in the case of Walking Dead season two, “What does an 11-year-old girl have to do in this situation? How does an 11-year-old girl relate to these grown-ups fighting over where they should go next? How do you give the player, as the 11-year-old girl, some ownership?” That becomes a thing that we spend hours and hours in meeting rooms beating on. Sometimes it leaves the writer crying because he just wrote the most beautiful scene of his life, but we said, “You can’t have the player just watch it. They need to be involved.” The thing we’ve learned is a healthy respect for how much work that is.

GamesBeat: The writers here, are they maturing in some ways? How do you develop that kind of talent?

Connors: There’s two fronts. There’s going out and looking for the best writers, experienced writers who know how to write serial plots over multiple episodes. People who maybe have some show experience, who have done that before, who can do a lot of that heavy listing and beat out the stories and get it all laid out. Then there’s the internal Telltale writers, who understand how to bridge those story moments with the interactivity and create the situations and the words that make believable characters that you want to spend time with.

A Telltale game only succeeds if the characters are interesting to be with. That’s what the Telltale writers need to do. Over time, they’ve understood the technology of how you make stuff stay relevant over time, how you add consequence to situations, how you build out a choice tree. These are all skills that exist on some level, but Telltale is much more complex than other companies. More and more of our guys are starting to get up to speed on that. We’re enabling a whole bunch of people to create more games like these.