GamesBeat: I think Tom Hall mentioned there was a comic book that gave you guys some ideas?

Romero: For weapons, yeah, the Mage comic book. That gave us some weapon ideas. But the whole, “It’s not aliens, it’s actually hell coming,” we just tried to be true to that. What would hell have in it? Probably pentagrams and people shredded in half hanging from the ceiling. Beating hearts and crazy stuff like that. So that’s what we made – the things that people think would be in hell. Not that we believe in hell. We just made the things that everyone imagines would be there. We tried to be true to that vision for the game.

GamesBeat: There are all these other things that have become part of gaming culture—the BFG, deathmatches, gibs.

Romero: Yeah, all these words—frag, gibs, deathmatch—these were all things that–Because of what the game was and what we were doing, we had to give names to things. In Wolfenstein, you couldn’t gib somebody, but in Doom we put that ability in, and it got even better in Quake. Adrian came up with “gibs” from “giblets,” the innards. You pronounce it with a “J.” [Laughs] And then “frag” was from Kevin Cloud, from fragmentation grenades in Vietnam—frag the sarge because he’s taking you into the most dangerous part of the jungle.

I came up with “deathmatch.” What are we doing? We’re playing a match to the death. So that’s a cool word, a nice compound thing. I’m always combining words. It came naturally. 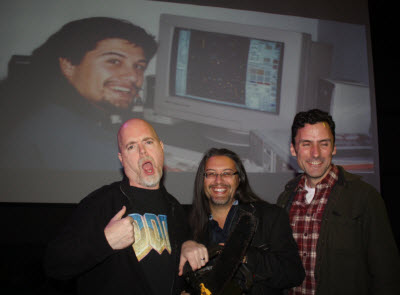 Above: Doom’s creators hold the chainsaw that made it into the game.

GamesBeat: Dave Taylor credited you for some very original trash-talk as well.

Romero: Oh, yeah. The trash-talk was pretty harsh when we were playing. We were basically acting like the id, what’s coming straight from the darkest parts of your brain. That’s what came out of our mouths. [Laughs] It was me and Shawn Green. Tom was always really funny when he said anything deathmatch-ey. American McGee was almost at the same level. But really, Shawn and I would say the worst things to each other. It got intense when we would play. It was really fun.

GamesBeat: When you play it today, what do you feel? There are some things people will notice, like the way your gun doesn’t go up or down.

Romero: That’s one of the reasons why it was successful. You didn’t have that extra dimension of worrying about aim. If someone was up above or below you, it would automatically shoot at them anyway. It makes the game easy to play, so you can focus on what’s in front of you. More people can get into it because of that.

GamesBeat: Games really have slowed down, by comparison.

Romero: I know. It’s so sad. Even Quake was slower. You can calculate it, how fast you move in Doom. You’re going 50 miles an hour running or some craziness. But I don’t care what the calculation is. Does it feel good to me? That’s all I care about as a game player.

With Quake, we had Quake going pretty much at Doom speed while we were making it. But we slowed it down because it took so long to build the levels in Quake. It was full 3D, and we had to light stuff and do a lot of programming for doors and everything. It was so much more complex that we couldn’t make levels that were really huge. If the player moved slower through the levels, then, it would take them longer to get through. That’s why it was slowed down. It also helped with networking. You didn’t have players moving so fast that you would glitch out on latency or a missed packet and go through a wall.

GamesBeat: Doom had some limitations as well. It was multiplayer, but it was only over LAN. Some people might think it was an online game, but—

Romero: It was a modem game between two people, and then it was also a LAN game. In 1994, right after Doom was launched, people were launching things like APCi Doom, where you could dial in and connect with other people using your modem. Then Dwango was another one. It was pre-Internet, but people were finding ways of connecting to each other as best they could to play this game, without having to call your friends up.

Because of the way we programmed it, over the LAN, we could only get four players playing at the same time. It was using peer-to-peer networking. It wasn’t a client-server architecture. It was sending so much data, the way it was originally programmed, that you could only deal with four players at once. Now it’s been rearchitected. Everything is so much faster. 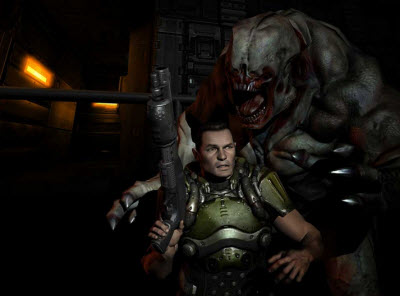 GamesBeat: What do you think of the first-person shooter genre today?

Someone at EA or Activision did some analysis – when a space gets this big, the costs go up by this many millions, so it’s a lot easier if you have a corridor with some big collision brushes that the player just goes down. It’s much easier for QA to worry about the look of those areas that you can’t get into. The economics of how much shooters cost is what’s dictated the linearity of design. Then everyone’s trying to figure out how to make it so the player feels like they have agency and exploration ability, even though they really don’t.

GamesBeat: The choice of going one way or another—

Romero: Yeah. Where there isn’t really any choice. But now, people are pushing forward with things like FPS MMOs. They’re doing more open-world games, which allow way more exploration. I’m very much a fan of that.

GamesBeat: Do you like an open world better than a more story-based game? What do you think of those different directions?

Romero: Games are all about mechanics. That’s what games are, at the heart. You can put a story on top of any mechanics, to string something together, but the game is about the mechanics. To me, one of the most powerful things about games is the story the player can put into the game. The more story you put into a game, the less ownership of the story you give to the player. The less story you put in a game, the more the player feels they can create their own story.

When you play deathmatch, you’re creating a whole story that you can talk about when you’re done, as opposed to something like—You play The Last of Us and you’re told the whole thing through the scripting. You know the outcome because you can go to the next segment of the game when you’ve finished the interactive portion. I’m not a fan of games that are really just stories with some limited interactive sequences in them. I’m about pure mechanics with a story stringing it together. That’s the essence of the medium.