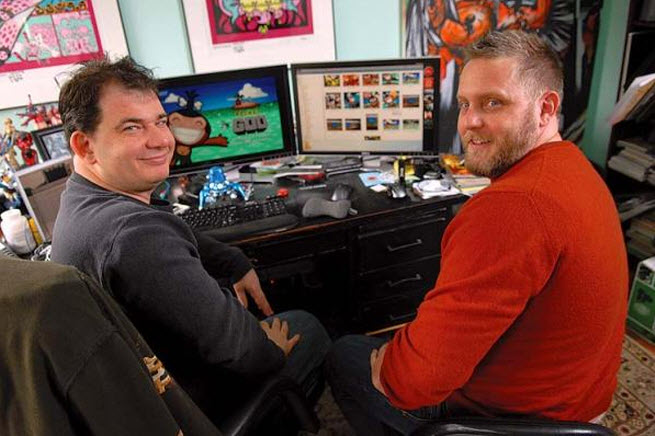 The 47th update for the Pocket God mobile game will be the final one. After 6 million paid downloads and 1.3 million in-app purchases, mobile game studio Bolt Creative has decided it is time to call it quits on the four-year old game. Today, it is releasing “Apocalypse, Ow,” the final content update that will be released to the Apple iTunes App Store for players to download. 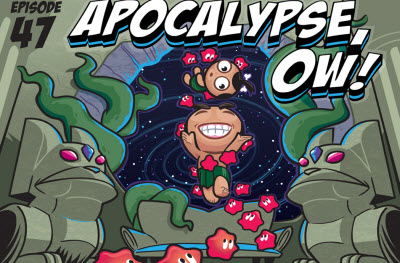 Created by two seasoned game developers, Dave Castelnuovo (pictured left) and Allan Dye (pictured right), Pocket God became one of the first original hit indie games on the iPhone after it debuted on Jan. 9, 2009. It was rated 5 out of 5 stars and went on to debut on Verizon Wireless, Android, Windows Phone, and Facebook. It has a sick sense of humor. You play a god, lording over primitive islanders dubbed “pygmies.” You can feed them to sharks or give them fishing rods. It’s one of the first titles to use OpenFeint to attract players.

“We’ve been building up to the apocalypse all year,” Castelnuovo said in an interview with GamesBeat. “We decided to wrap it up, after four years working in a small team. We thought this would be a good end of a chapter. It was a tough decision to make. But the end of the world is here. Maybe I should be in Las Vegas.”

The title ranked No. 1 on the App Store for six months, and it is ranked by Apple as the No. 9 top paid app of all time. It was something that friends could fire up to show off an iPhone. But Castelnuovo never wanted to engage in “company building.” He wanted to create a lifestyle business, where he could focus on being creative. So the company stayed small, and to this day, it has only nine people. They sustained themselves by creating new episodes, delivered to users as updates to the game. They had funny titles such as “Dead Pygmy Walking” and “The Pyg Chill.” Players downloaded the updates, and through the free OpenFeint network, they could share the game with their friends, who could buy it for 99 cents. 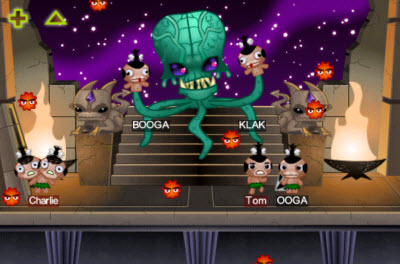 In that way, Pocket God become a perennial generator of revenue at a time when the app stores were being flooded with unsuccessful titles. It was an inspiration to indie developers because it showed them the path to success without selling out to a bigger corporation. Bolt Creative came up with ways to cross-promote the game with other developers, who would embed references to the game in their own games in return for promotion in Pocket God. All of these practices have become standard ways to promote mobile games.

Castelnuovo had a background as a game developer, having worked on Sega Genesis and Flash games. In September 2008, he started toying with the iPhone. During the day, he was still working like crazy — 60 to 80 hours a week — at the World Golf Tour. But he set aside 10 hours here and there to develop his iPhone game, along with experienced artist Dye. Castelnuovo threw out the idea of animating natives on a remote island, with the characters about the size of your fingertip touching the touchscreen. Dye drew up some simple animated characters, and they went wild with a “sick sense of humor.” Within a few months after release, Pocket God rose to No. 1, mainly by word of mouth. At one point, it was generating $18,000 a day for the two-man team.

“We wanted it to be a lifestyle business,” Castelnuovo said. “We don’t want an office or to raise funding. We don’t want more structure.”

Now that Pocket God is a huge success, Castelnuovo has bought his own home and is in the midst of remodeling. He has socked most of the money away for a rainy day. They created a second game, Pocket God: Journey to Uranus, an iPad-only app that has been downloaded a million times since December 2010. And now they’ll move on to another one. But before they do that, they’ll end the original Pocket God. 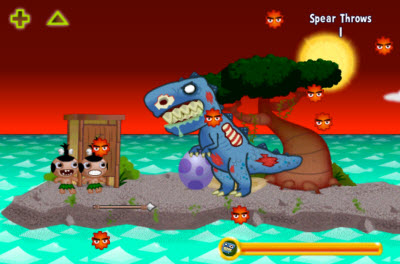 The final update wraps up some story threads. The end of days have come to the pygmies and players will embark on a quest to either cause the apocalypse or prevent it. The Scientologists will make an appearance, including a pygmy named Tom (as in famous Scientologist and actor Tom Cruise) who jumps on couches. Fans will be able to enter the Apocalypse Temple’s final room, dubbed the Closet Room.

Castelnuovo says the team, which is based in San Francisco but still has no permanent office, will move on to its next game, Pocket God: The Runs, an “endless runner” game akin to the side-scrolling game Canabalt. Castelnuovo calls the new title an “offshoot” rather than a sequel, and it is one of seven ideas for new games that the company came up with in the Pocket God universe in the past two years but never had time to work on. Pocket God: The Runs will debut on iOS this spring. The next few games will be offshoots, though a true sequel to Pocket God may follow at some point.

“This is more about getting more creative,” Castelnuovo said.

In Pocket God: The Runs, you’ll have zany humor. If you run over turds, you’ll slow down. You’ll run away from evil boss monsters.

Castelnuovo lamented that OpenFeint has now been shut down by its new owner, Gree. He got warning about that and switched to Apple’s own game-sharing service, Game Center.

The 99 cent digital comic book app continues on. So fans don’t have to worry that the pygmies and Pocket God will forever disappear. And, just in time for Christmas, pygmy figurines are available in stores such as Barnes & Noble. As for the whole game industry, Castelnuovo looks back across four years and says, “Mobile is tearing it up. I look at hardcore gaming sites that focus on mobile. They aren’t acknowledging the huge mobile market. iOS is now the No. 1 console in all of history. As for us, we are looking forward to The Runs.”