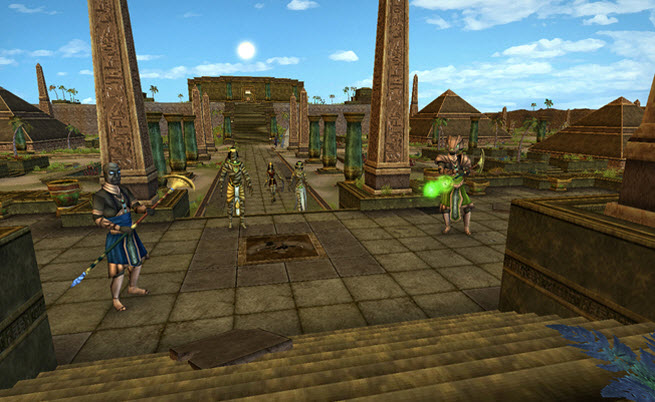 The folks at Hunted Cow Studios are patient. Today, they’re unveiling Eldevin, a massively multiplayer online role-playing game that they have worked on for eight years.

The company is releasing the first-ever gameplay trailer for Eldevin, and it is announcing a closed beta test set to launch in March. The developer’s target is the browser-based free-to-play MMO, Runescape. Runescape has an 11-year head start and more than 200 million registered players. But Elgin, Scotland-based Hunted Cow has financed its 3D MMO with a bunch of other games along the way, and the group wants to release the highest-quality experience it can develop, said John Stewart, studio manager of Hunted Cow.

Eldevin is a story-driven title set in a corrupt fantasy world on the edge of an all-out war. Players can join the Eldevin army or the mages of the Arcane Council in a quest to recover magical artifacts. The game runs entirely within a Web browser using Java technology, and it doesn’t require high-end graphics processing. That means it runs on the Web, and it works on the majority of netbooks, laptops, and desktops running Windows, Mac OS, or Linux. The team wants to reach as many players as it possibly can.

After eight years of work, Eldevin is a vast world. Stewart wants to release one of the richest, most in-depth experiences players can get without having to download a massive file. The title has real-time combat, 100 different abilities, 200 talents, several hundred items, and plenty of things for players to collect or craft. People can pursue 14 different professions. Hunted Cow estimates the title will have hundreds of hours of gameplay at launch, and it will have 600 individual quests. Eldevin has group dungeons and solo adventures while featuring player-versus-player combat, including battlegrounds for five-on-five and free-for-all matches. After launch, the team will continuously add more content.

Stewart said, “Eldevin is our flagship project. We’re a small indie developer but we’ve been working on this game for the best part of eight years now. It incorporates everything we’ve learned from our previous games, such as Fallen Sword and Gothador, but adds a wide range of innovations and ideas we believe take the genre in a number of new directions.”

He added, “As huge MMO fans ourselves, our goal was simple — to build the best massively multiplayer online role-playing game on the market. We’re incredibly proud of what we’ve accomplished, and we’re ready to find out what players think of the game.”

Andrew Mulholland and Glenn Murphy started Hunted Cow in 2003 in the small town of Elgin. Their first website, CowPlay, featured multiplayer correspondence chess games. Then it launched the free-to-play online titles Gothador and Fallen Sword. After those launched, the company hired its first employees to work on Eldevin. Since then, the studio has released games like Solar Fleet, a space-trading Web-based experience.

Hunted Cow has also released new mobile war-strategy offerings, including Tank Battle: 1944, complemented by Civil War: 1863 and Tank Battle: North Africa. I’ve been playing these titles, and they’re addictive. They remind me of the old paper-based war games I played as a kid. Full told, the company’s offerings have had more than 4 million players. Thanks to these titles, Hunted Cow is entirely self-funded to date.

Mulholland said the company has gone through several iterations on Eldevin. The developer hasn’t released it yet because it wants to make sure the game is at its best.

Stewart said that the company has invested more than $1.6 million to develop Eldevin. The studio has just 20 employees, far fewer than Jagex, the maker of Runescape, and that explains why the work has taken such a long time. Eldevin has 3D graphics, which isn’t easy to do in Web-based Java applications.

But Hunted Cow hopes that its MMO will be more modern, incorporating all of the learnings from the past eight years. Eldevin has an integrated account system that will enable cross-promotion with other Hunted Cow offerings. The studio is planning on publishing releases from third-party developers.

“Our goal has been to bring together the excitement and agility of an indie developer, which is what we still consider ourselves to be, with the decade of experience we’ve built up,” Stewart said. “The goal’s very simple. To redefine the expectations for browser-based MMO games for the whole industry.”