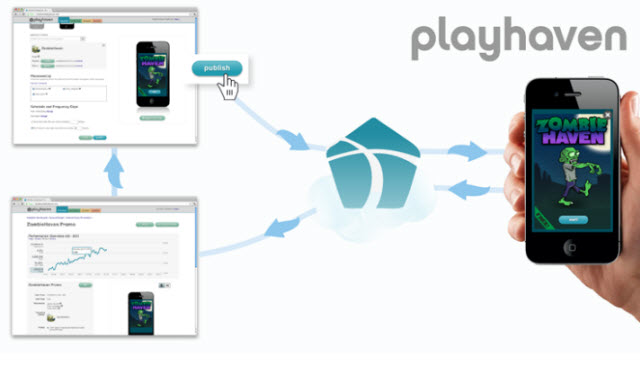 Playhaven started life as a gamer’s social network. Then it morphed into making communities for mobile games. Now, after its third pivot, the company is focused on how to make money for mobile app developers via a real-time game marketing platform.

Andy Yang, who took over as chief executive in March at San Francisco-based Playhaven, acknowledges the company has been on a rollercoaster in the past few years as it adapted to all of the changes in mobile gaming. But he says the company had faith that it would hit upon the right product, which lets game developers tweak their marketing tactics in real-time to boost sales as much as possible. The move boosted revenue by 150 times, and it shows that there can be a third chance for companies that learn from their past mistakes — if they listen to customers. 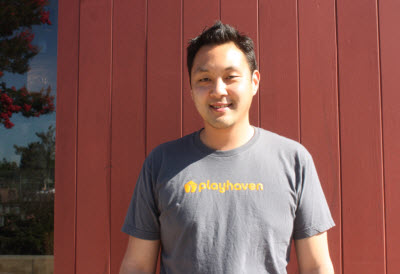 We’re going for it,” Yang (pictured) said in an interview. “And this time we’re going to get it right.”

Playhaven’s earlier businesses didn’t make money, but they did help the company become close to the needs of game developers. Back in March, Yang talked to 42 game developers and it became clear to him that they were suffering from a rollercoaster effect. Their games could skyrocket in demand for a few days, only to plummet equally fast as the novelty wore off. It was very rare to see apps that became popular and stayed popular.

The feedback was that developers had no relationship with players, there were too many software development kits (SDKs), or middleware options, in the market. And developers had too little flexibility when it came to working with platforms.

For the SDKs, there was the additional problem of “bloat ware.” The SDKs demanded so much run-time memory that they were pushing the apps that used them above 20 megabytes. That is the arbitrary limit that Apple has drawn for allowing an app to be downloaded “over the air,” or wirelessly. One developer who wasn’t watching this problem saw his app go above 20 megabytes after one update and then saw downloads of the app plummet to scary levels.

So Playhaven’s dozen or so engineers built an SDK that didn’t need much memory and enabled game developers to take control of their marketing, promotion and monetization in real-time. The goal is to boost the average revenue per user in a game.

“Developers can now take over the business side of their games and tweak a dashboard to make it pay off better,” Yang said. 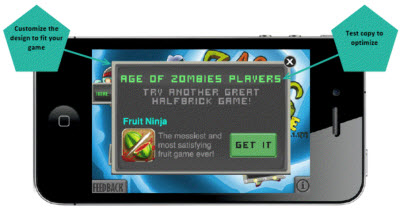 Playhaven’s cross-platform marketing platform uses HTML5. The game still runs in a native format on the iPhone, but there is a HTML5 layer, dubbed a dynamic overlay, that developers can easily update themselves. That was important, since updates issued for iPhone apps require them to be submitted to Apple, which takes time to approve them, whereas you can update the HTML5-based layer without approval, so the update happens in real time.

That, in turn, means developers can create offers for users on the fly. If one offer isn’t working well with a user, the developer can tweak the marketing layer, which makes advertising offers such as the one pictured, where you can try another game from a developer and get a reward in that other game. 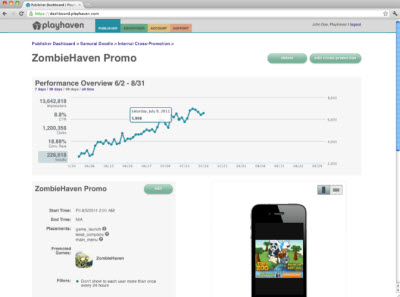 Playhaven brings a number of services together, some developed by partners such as in-game ad firm TapMe, and others, such as analytics, developed by Playhaven itself. Yang said Playhaven wants to be the “Swiss Army knife” of game marketing and monetization, giving developers a lot of different options for increasing revenues. Playhaven gets a share of revenues generated. The drag-and-drop interface (pictured) makes it easy to change the marketing options.

Developers can make special offers such as give deals to the first 100,000 users to download a new game update. When new gamers adopt a developer’s game, Playhaven knows the behavior of that player based on how the user plays other games, so it can help the developer determine if the user never pays for anything or is a big purchaser of virtual goods. 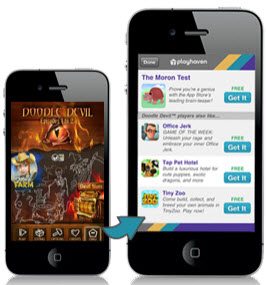 The tools are all inspired by what developers can already do on Facebook, where they can make changes in real time and see the effects among gamers almost immediately. The mobile platforms aren’t quite so frictionless, but they are getting there. Since March, Playhaven’s list of customers has grown from 300 to more than 750 developers. Revenue is up 150 percent since March, and Yang said the company could become profitable in a matter of weeks.

The pivot itself was a big change. Playhaven started as MyGameMug, a social network for gamers, in 2008. The founders, Raymond Lau, Erik Yao, and Kurtiss Hare, then switched to creating communities for mobile games in 2009. That generated a lot of users but was hard to monetize. During the last change, the founders departed and Yang took over. He is counseled by chairman Mark Jung and advisors Bill Lee, Kevin Dent and Ken Keller. They encouraged the company to attack the distribution problem by taking a previously developed cross-promotion widget and turning it into the company’s main business. That turned into the non-incentivized install business.

To date, Playhaven has raised $3 million. There are rivals in the business such as Tapjoy and Flurry. But Yang hopes to create a network of partnerships that makes his company into a better choice for monetization across the board for mobile games.

“It has really accelerated in the last couple of months,” Yang said.

Yang said he is trying to double the size of the team, but talent is hard to find. Most of the team is in Portland, Ore.