Afterparty unveiled a nonfungible token (NFT) platform for creators to engage with their fans and generate better revenues.

It’s part of a plan to enable a “creator economy,” where more people can making a living entertaining others on social media with events such as game livestreaming.

The Los Angeles company is creating a decentralized platform, using Web3 (the blockchain web) technologies, to provide creators with the tools to monetize and manage their fan relationships, deliver live virtual experiences, and sell digital merchandise. Creators can mint and launch their own NFTs on the platform (it claims it takes on minutes). They can issue tokens to fans so they can get into “token-gated” virtual experiences such as VIP parties. And in contrast with Web 2.0 technologies like Instagram, the bulk of the revenue on the decentralized web goes to the creators, the company claims.

NFTs can uniquely identify digital items, and with that creators can issue one-of-a-kind collectibles to auction off to the biggest fans or just share as rewards for fan loyalty. Afterparty’s platform also gives creators the capability to host intimate, live experiences for their most dedicated fans.

“I’ve sort of spent my whole career thinking about the intersection of creators, technology, and the entertainment space,” said CEO David Fields said in an interview. “I was just enamored by the Ethereum white paper. I came across that back in like 2015 or 2016, and just saw it as a fascinating potential new platform. We looked at the landscape and the timing was apt for this intersection of crypto and creators with the Web3. We needed better creator monetization. It’s not just about the top 0.001%.” 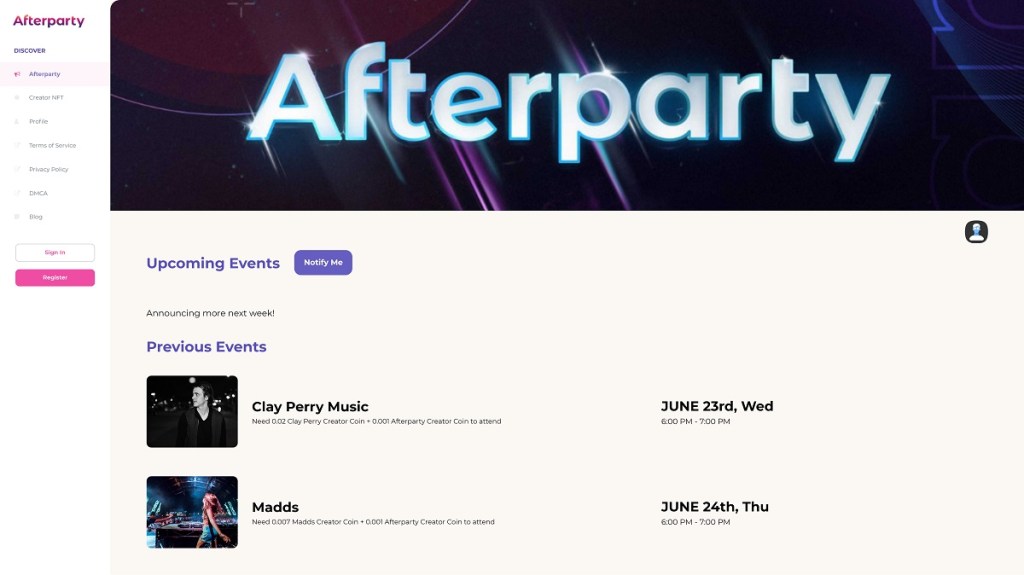 Afterparty got its beta test going in June, and it’s launching its own Ethereum-based NFT marketplace this fall. The creators can choose from many professionally designed NFT frameworks to make it easy to launch polished, visually appealing, one-of-a-kind NFTs that are authentic to their individual brand identity, according to the company. These NFTs tie in seamlessly to the events platform for creators to offer exclusive experiences and merchandise to collectors.

In the past six months, NFTs have exploded in other applications such as art, sports collectibles, and music. NBA Top Shot (a digital take on collectible basketball cards) is one example. Published by Animoca Brands and built by Dapper Labs, NBA Top Shot has surpassed $700 million in sales, five months after going public to a worldwide audience. And an NFT digital collage by the artist Beeple sold at Christie’s for $69.3 million. Investors are pouring money into NFTs, and some of those investors are game fans. The weekly revenues for NFTs peaked in May and then crashed, but now those revenues are bigger than ever.

“There is a generation of gamers who have grown up buying skins and avatars, and they’re spending their money around things that bring them value in digital spaces,” Fields said.

Over time, Fields said the company hopes to decentralize its own operations and be majority-owned by the creators and the fans.

“I think that’s a really exciting experiment. And we’re sort of at that experiment phase with NFTs,” Fields said. “We’re super-early, it’s very much in its infancy. And we just think that NFTs are going to be a transformative way for creators to really connect more deeply with their fans and be able to make a sustainable living as a creator in this growing creator economy.”

Above: Afterparty’s profile page for creators.

The platform uses Layer 1 infrastructure (or solutions embedded in a blockchain’s basic protocol), based on the transparent and secure digital ledger of the blockchain. The platform enables creators to choose from Ethereum, BitClout, and other emerging Layer 1s for their underlying NFT or social token, enabling them to capitalize on a more decentralized creator economy with a direct artist-to-fan relationship.

The company is using the Polygon sidechain to eliminate gas fees, or those related to computing and energy costs.

Fields said that nobody has been addressing what to do with NFTs after they’ve been sold for the first time. Afterparty is creating tools so creators can engage with fans in an ongoing dialogue and build deeper connections over time. It also wants fans to participate in a creator’s success over time.

“We’re interested in the experience that comes after the NFT. And while the early iterations of NFTs have been about digital art and collectibles, the digital trading card and new business models are coming,” he said. “This is the first big creator tool that we are launching. Creators are starting to dabble in social tokens, but they don’t really have clear ideas about how they can add value.”

Above: Afterparty has six employees.

Afterparty launched and tested its event platform on BitClout and is backed by some of its biggest creators, who are already seeing value in this new monetization model.

Artists Clay Perry and Tropix hosted events on the Afterparty platform, which allowed them to increase the market value of their “creator coins” on BitClout by $4,750 and $10,000 respectively. They also got $500 and $1,000 in direct income from their first events. Other creators who participated in the event as initial backers include Echosmith, Madds, Robert Graham, Jon Youshaei, and Vale Genta.

Afterparty is hosting more events with BitClout creators, including Reade, Craig, and Jake Udell, all top 10 creators on the platform, and having already integrated with Ethereum, will host an event with Young & Sick and other music artists to be announced in the coming weeks.

Fields formerly worked at Disney and was head of investments at Michael Eisner’s The Tornante Company. Dan Rahmel, the cofounder of Afterparty, was a senior technology executive at Music Audience Exchange. Robert Graham, the creator and influencer agency founder, serves as head of talent with musician Conner Frey (cozyboy) as a front-end developer.

Afterparty also announced today that Eytan Elbaz, the cofounder of mobile gaming publisher Scopely, has joined as a cofounder and investor. As a musician himself, he sees how Afterparty can drive the new music and social token economy.

“For musicians, there are many more ways to lean into the band, the creator, or the musician’s work,” Elbaz said in an interview. “We thought there was an opportunity to capture the additional engagement that the fan wants to bring. And then all these social natives, all these creators, have just crazy followings on social media.”

The company has six people, and it is hiring.