A few veteran developers are trading in their ancient empires for towering robots.

At this year’s Game Developers Conference in San Francisco, developer BonusXP unveiled Servo, a sci-fi mech game for PC that tweaks the real-time strategy (RTS) formula for modern tastes. Gone are battles that take 45 minutes or longer to complete — Servo matches last around 10 minutes. It places a huge emphasis on hero units called servos, customizable mechs that players use on the battlefield.

An Early Access version will arrive on the Steam digital distribution platform later this spring for $20, followed by the release of the full game in the fall. Incredibly, BonusXP only started making Servo less than a year ago.

For those working in the Allen, Texas-based studio, however, building an RTS game is long overdue. Half of its 20-person team used to work at the revered Ensemble Studios, the maker of classic RTS series Age of Empires and Age of Mythology. Microsoft shut down Ensemble in 2009.

“It’s a good group of people that have worked together for quite a while. The average industry experience for people in our studio is over 12 years,” BonusXP CEO Dave Pottinger told GamesBeat. “It’s a pretty senior staff, which honestly makes it easy on us. People know what to do, and they have fun doing it.”

I met with Pottinger and chief designer Bruce Shelley (they’ve known each other since their days at Ensemble) for a hands-off demo of Servo. During our conversation, I found out why they thought now was the time to return to RTS games and how they’re building Servo for today’s audience. 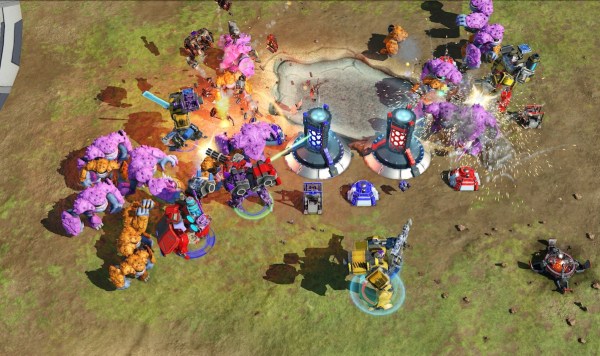 Above: A servo squad defends their base from the Bloomspawn.

Why they needed a clean break

At Ensemble, Pottinger said they tried to make other types of games — including a massively multiplayer online game set in the Halo universe — but they “just couldn’t figure out how to do it.” After the studio closed, the last thing on anyone’s mind was making another RTS. It wasn’t until a few years later, when BonusXP started working on an upcoming strategy game for mobile devices, that they changed their minds.

The unannounced project forced them to “rethink what a strategy game was,” and it reignited their enthusiasm for the genre.

“If we’d jumped right back into a strategy game, I think we would not have come up with Servo. We would have done things the way we had been doing them for so long,” said Pottinger. “It was good to take a break. You do something for — jeez, what was it? Fifteen years? We became our own worst enemies. It’s easier, too, to start over and do something new. With Age, once you start a franchise, you do a sequel where everybody expects all the features from the previous game [while also] expecting something new. And after you do that three or four times, you have this game that’s pretty unwieldy, and it has almost too many features.

“But we love Age. The opportunity to work on that for so long was a gift. But the chance to start over with something new — we’ve always wanted to make a sci-fi game that was our sci-fi game. Halo Wars was sci-fi but not really ours. I think that’s fun, too.”

Shelley also found comfort in coming back to a genre he’s been so instrumental in popularizing. When he was a kid, video games didn’t exist yet, so his love for strategy came from playing board games. He honed his game design chops with Sid Meier on Railroad Tycoon and Civilization before joining Ensemble and creating the Age of Empires franchise.

“I like games that make me think. It just feels right,” said Shelley. 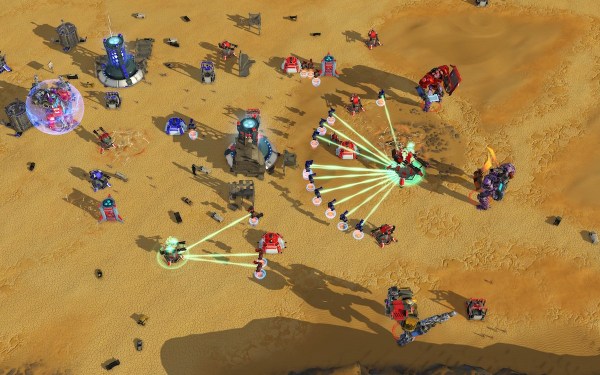 Above: You can use drones to either support your mechs or to act as the front-line.

Servo takes place in a future where humanity is living among the stars. Mercenaries are pillaging the ruins of a long-abandoned Earth for Bloom, a precious energy resource. This sets off a mad rush for Bloom mining as competing factions arrive on the planet. Controlling these mines enables you to build bases, research new upgrades, and build drone-producing factories that support your mech pilots. Your main goal is to defend your territory against other mercenaries and the Bloomspawn, monsters who aren’t too happy about people stealing their stuff.

“Gameplay-wise, there’s a lot of Age of Mythology in here,” said Pottinger. “The way you get servos into the game is like the Age of Mythology minor god model. The whole focus on powers — that’s straight out of Age or Warcraft III, in terms of how the units work.”