If the Xbox One X turns out to be a popular holiday purchase this fall, you might credit a lady bug. The console costs $499, and it delivers 4K HDR visuals for games such as the racing title Forza Motorsport 7.

Microsoft’s team created an interactive demo with a set of lady bugs that show the difference between what the imagery looks like on a big screen TV with the 4K turned on, and how it looks fuzzy and less detailed when the 4K is turned off. Microsoft bills the Xbox One X as the world’s most powerful console.

I happen to have one waiting for me at home (Microsoft sent one to me), to go with a (refurbished) Samsung 40-inch 4K TV. I haven’t cracked it open yet. Meanwhile, I made a trek to Redmond, Washington, ahead of the November 7 launch. I talked to Albert Penello, senior director of Xbox console marketing at Microsoft, and I asked him why people should buy the Xbox One X. He gave me his best pitch, and then we talked about how the console launch is proceeding.

Here’s the details on the Xbox One X launch event. He said the team is busy getting ready, and he noted there are tons of 4K games that will be available for the console on day one, with other big titles like Player Unknown Battlegrounds coming soon. Here’s an edited transcript of our interview. 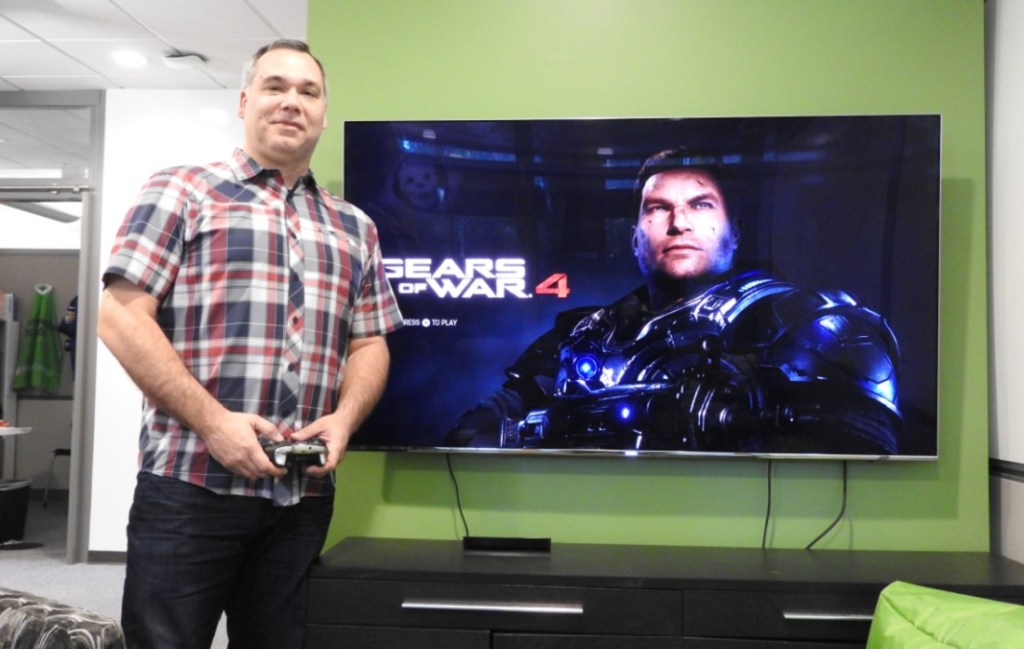 Above: Albert Penello is senior director of Xbox console marketing at Microsoft.

GamesBeat: How are you prepping for launch? How do you think you’re convincing people that Xbox One X is for them?

Albert Penello: We’re 16 days away, 17 days away? I think we’ll be sending out announcements in the next few days about our launch event, where all that’s happening. We’ve seen really good uptake on the Xbox One X enhanced program. I think the last official announcement was more than 130 or 140 titles. I think we’ll be over 150 titles by the time we launch, with a pretty significant catalog. These are games where developers have said they’ll either go back and do work to existing games, or ship new titles with specific enhancements for Xbox One X.

If you think about it, traditionally consoles launch with maybe 18 or 20 titles. We think we’ll have 70 within the first week, which makes this a huge launch lineup for Xbox One X. We just released the new dash. That’s been focused on being faster and more personalized, with the ability to add new blocks and keeping Mixer and broadcasting first and foremost.

We’ve had the fastest pre-order sales we ever had, back when we announced Scorpio at Gamescom. The feedback from developers, partners, and fans has been great. Yesterday we announced original Xbox titles coming back, a select few, and we’re going to be making those games better. Those games will have higher resolution, four times their original resolution on Xbox One S and 16 times their original resolution on Xbox One X. They launch today. I think we launched 12 or 13 titles. It’s not upscaled. We’ve actually done work to improve the rendering of the games in the emulator.

We also announced four Xbox 360 games that will be part of the Xbox One X enhance program. The capabilities of the 360 were really amazing, and in some cases developers exceeded the capacity of the displays we had at the time. There are textures and artwork in some games that could never be displayed back in the day. We’ve used the same technology we’re using for our Xbox Originals games to increase the resolution of a handful of Xbox 360 games, and in some cases add wide color gamut and HDR. The artwork was actually authored in 10-bit color, but couldn’t be displayed on an Xbox 360. We’ve enabled that for Xbox One X. Oblivion, Fallout, Assassin’s Creed and Halo 3 for Xbox 360 will all be getting free upgrades that enable higher resolution. 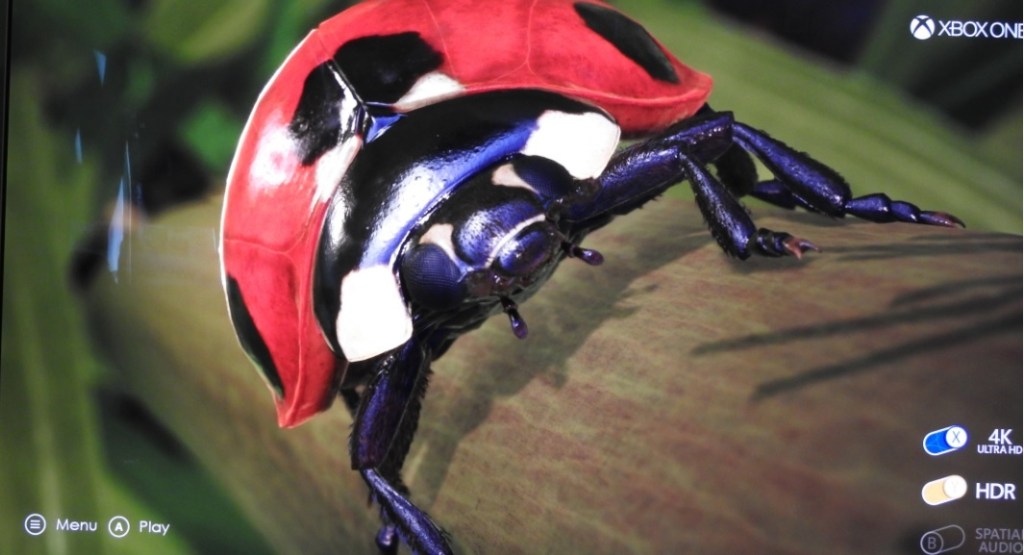 Above: The lady bug demo on the Xbox One X.

This is a demo that we’re going to be releasing for public consumption. We get a lot of questions about 4K and HDR. This is a piece of work that our advanced technology group built for developers. We worked with the ATG to turn this into something we can give to customers. Effectively, it’s a real-time in-engine demo. This is all being rendered by the Xbox One X, but it’s designed to highlight 4K resolution and wide color gamut and HDR.

Today a lot of people still ask, “How do I know that my TV’s in HDR? What does 4K really look like?” Not only do we think this is a gorgeous demonstration, but it’s something you can show to the family over Christmas with your new TV. You can move around and zoom in, and you can turn 4K off. Now the demo is rendered in 1080p. If you pay close attention to the textures on the eye, on the ladybug, you can see when you go back to 4K, the amount of detail that comes back.

It’s not complete yet, but over time we’ll have the ability to randomly change the scene a bit. I can go in and change the color of the ladybug if I want. We have a robot ladybug. Again, in real time, there’s 4K, and now that’s HDR turned off. You can see, when I take it all the way down, the leaves and the petals and how much detail gets lost when you drop down to 1080p. Here, you can see with HDR and wide color gamut turned off, the brightness goes down. It’s another great way to show how the textures and lighting change.

GamesBeat: Have you seen 4K TV sales picking up in advance of the launch? I finally had to take the plunge.

Penello: I haven’t looked at the latest numbers, but I know that feedback from retail has been strong. Something like this, we can have it running in stores. This is the kind of demo that really helps showcase the TV that they’re trying to sell, especially when you turn HDR off. The image quality difference between those two states is pretty significant. That’ll be out for people when the console launches. It’s a small download, just a couple of gigs.

GamesBeat: Do you think it’ll be tough to beat the first holiday season of the Switch?

Penello: I don’t like to predict numbers. [laughs] We’ve seen incredible interest. Talking to people in the press, all the feedback we’ve gotten is that any news about Xbox One X drives a lot of coverage, a lot of interest. I get that pretty consistently from people I know in the industry. Every time they do a story on Xbox One X, it drives huge traffic. The pre-orders were, again, not only the fastest, but also the most for anything we’ve released. I’m feeling like we’re going to have stock problems. Over the holiday it’s going to be a must-have item. Knock on wood, but I’m confident in our ability to sell good volumes of this.

Above: Xbox One X

GamesBeat: I know you haven’t announced the launch event, but is it going to be similar to past launches you’ve done?

Penello: We’re going to do a big launch event for it. We’ve talked a lot about how we’re trying to generate the same level of interest as a new console launch, but without the pains of a new console launch. A lot of this campaign has been treating this like a next-gen console, but changing the paradigm and the business around being part of the family, having complete compatibility, making your existing games better. Obviously Xbox One S is going to be supported and sold alongside it. The same games run on both. We’re not introducing a new generation insofar as we’re trying to get away from the past, but we are going to try and build the same level of hype and interest as we would have for a traditional console launch.

GamesBeat: As far as the slate goes, it seems like there’s a broader set of titles, as opposed to just stuff for the super hardcore.

Penello: We’ve announced that we have a lineup of Disney titles that we’re bringing to both Xbox One S and Xbox One X. The Disneyland Theme Park, the Pixar racing game. We’re also doing an update to Zoo Tycoon. Largely, there’s a very broad set of games available on Xbox One today. The Lego games do very well. Cuphead, Super Lucky’s Tale. There’s a good mix of genres for gamers.

Obviously with this kind of technology we tend to see more interest in the more mature games, because those tend to push the technology envelope a bit more. But from an overall purchase perspective it still has the diverse library of games that you can get on Xbox One as well. It’s great that we have some of those upgraded for Xbox One X. Super Lucky’s Tale and the Disney games are all upgraded.

Above: I would have loved to have done this in PUBG on the Xbox One, but it didn’t happen.

GamesBeat: PUBG is going to be a retail title as well? I think they announced that this morning.

Penello: Okay, that they’re going to ship as a retail SKU? Good. That game is—what is it now? Every time I have a stat it turns out that the stat’s old. 15 million users or something like that? Being able to bring that game to console as a launch exclusive, with all the momentum—obviously on Xbox we have a great online service, a great broadcasting service. All the pieces are in place for that to be an absolute blockbuster. Being able to work with them — since we’re publishing it – having our teams come in and help guide the console development to make sure we get a really strong console version—I think that game is going to do gangbusters this year.

GamesBeat: How did the update go? Fairly smooth?

Penello: At this point we’ve gotten to be pros at shipping console updates. I really am impressed with how ahead of the game the team has been, to get the new console update out weeks before the Xbox One X launches. There are already 4K titles propagating in the system. Gears of War, for instance, is done. The 4K bits are already up online, just waiting for consoles to get sold.

This goes back to the muscle that we built in shipping, by shipping these monthly updates. We have a really strong insider program where we get a lot of feedback. We’ve improved our shipping muscle. And then ease of development on Xbox One X has gotten, as you can see, so much more game support than we’ve had before, than any console’s had before. Games are getting done early. I can’t think of too many times when you have final bits ready to go two and a half weeks before launch. That’s a pretty impressive feat. Things are going smoothly and we’re going to have a strong launch.