A couple weeks ago, a pre-launch build of Alien Blackout taught me a lesson: Don’t assume a mobile port of a popular game series automatically equals low quality.

Alien: Blackout is now officially available on Android and Apple app stores. That means it’s time for developers Rival Games/Theory Interactive, along with publisher D3 Go!, to not just teach the game-playing public that same lesson, but to also give the industry as a whole a creative benchmark to reach for.

Alien: Blackout is absolutely how you create a mobile spin-off of a game concept that was birthed on a traditional platform. 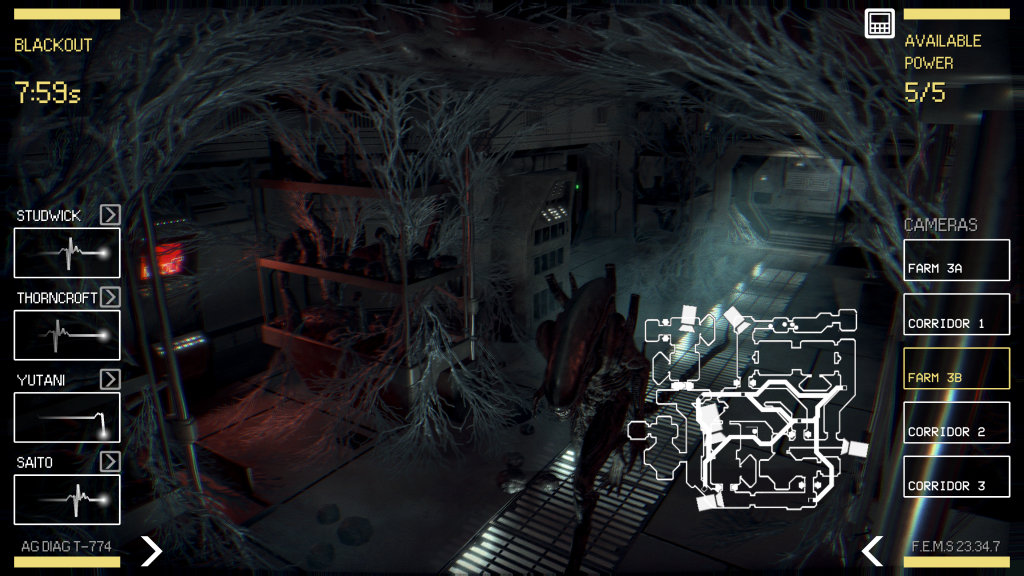 Above: Oh crap. There it is! OK. Where is that? Which camera again?!?

Alien: Blackout takes place immediately after the events of Alien: Isolation, where we find Amanda Ripley alive but not well, cramped in a make-shift living quarters inside the air ducts of the Mendel space station. It’s unknown how Amanda survived the ending of Alien: Isolation and wound up here.

What’s also unknown is how the hell yet another xenomorph somehow tagged along with her, or how it has slaughtered the entire station. I’m starting to think Amanda’s very existence is more curse than blessing for any human that crosses her path.

As good … or possibly bad … luck would have it, a ship docks with the station and requires supplies to complete its journey. The ship’s crew list, however, contains some peculiar characters. Specifically, a high ranking member of the Yutani family and one of Weyland Yutani’s most brilliant scientists. Either some larger plan by the Weyland Yutani corporation is afoot, or Amanda has some of the dumbest luck in human history.

Amanda needs off the ship, badly. In exchange for spending a few years in a sleep pod heading home, she agrees to help the crew navigate the station for the supplies they need while avoiding the black, penis-shaped murder machine lurking its corridors.

To do just that, Amanda will need to manipulate the station’s security system and bark orders over radio communications.

Above: That red dot is all bad.

An even more interesting game design

Most of the game takes place on a monitor with a 2D map that tracks the crew member’s movement, allows access to camera feeds, controls doors, and activates motion sensors. Amanda can also select individual crew members and tell them what to do, such as hurry-the-hell-up or hide. She can also draw out routes for the humans to follow.

The other portion of Alien: Blackout takes place in Amanda’s hiding spot itself. If Amanda yaps too much with the humans down below, the xenomorph will track her down in the air ducts. Amanda can hear the monster approaching her location, quickly swap out of the monitor view, and kick the door closed before she’s turned into red paste. After a few seconds, the door re-opens, and Amanda is allowed back into the security system.

Amanda’s micro-management of the crew and its security systems is the heart of Alien: Blackout’s play premise. There’s a lot riding on Amanda’s shoulders. She has to keep at least one crew member alive, all tasks must be completed before the entire section you’re occupying runs out of energy (tracked by a timer), and occasionally ensure that the monster doesn’t murder her horribly in the ducts.

All the acts, in and of themselves, are not intrinsically enjoyable. I’m not playing Alien: Blackout for the tenth time because flipping through camera feeds is great! The separate gears all work equally to create a tense puzzle that can not be cracked by one mechanism alone.

Amanda has to be smart about who to separate from the group, when and where to send them, how quickly, and when to tell a human to hide. And in the worst case scenario, when to use one of the crew as bait. She has to decide when to sacrifice a motion tracker for more door control. When is it safe to flip through the camera feeds to hopefully spot the xenomorph and work out where it’s roaming? There’s a noise in the ducts! Is it just the creature traveling to another part of the station, or is it after Amanda? If Amanda has to kick the door closed and be locked out of the security system for a few seconds, are the humans below doing something that will get them killed without her guidance?

Above: I think I screwed up.

Alien: Blackout is a puzzle game whose solutions are not necessarily straight forward. What was a smart move the first time I played a level, becomes fatal the next. The xenomorph’s behavior is the constantly shifting joker in the deck. Although there are ways to manipulate the creature’s AI for short periods of time, similar to Alien Isolation, it won’t tolerate chasing the same things in the same ways forever.

And this is where Alien: Blackout is a more sinister challenge than Alien: Isolation. When it feels like the xenomorph is being easily manipulated, the truth is the xenomorph may be manipulating you.

Unlike Alien Isolation, Amanda doesn’t have all day to walk the monster around the station. There’s a timer involved, power is running out, and the humans aren’t going to get their work done in time living in a locker.

Everything Amanda does in Alien: Blackout has to be either creating, or taking advantage of, an opportunity. 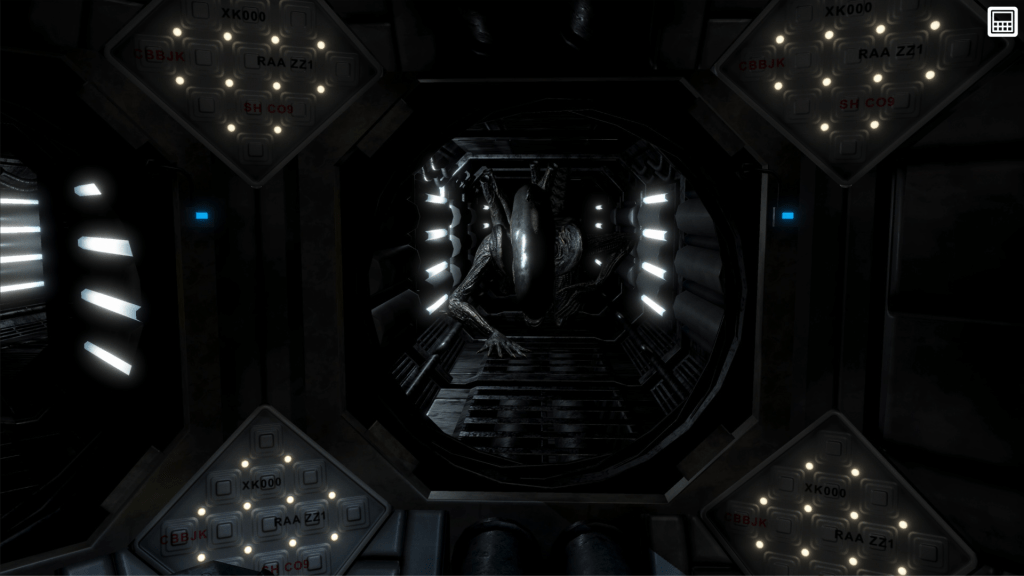 Master of its platform

Alien: Blackout’s premise, speaking for both its narrative and game design, fits perfectly on a mobile platform. There isn’t explicitly a fourth wall break, but more of an absorption, with the action taking place in-game on a touchscreen CRT (Cathode-Ray Tube) panel with Amanda huddled in a cozy space. I love Alien Blackout’s self awareness of how people in the real-world are going to play this game, and how it takes advantage of that route to create audience immersion.

But what I like even more is that the design is catered, fully, to the mobile platform. It’s crafted, beautifully, to not be a port of something else. It’s not a concept that was meant for one control scheme and then rejiggered for another.

Above: “What do you think Amanda meant by, ‘gotta break a few eggs to make an omelette’?”

And by slight, I mean very slight.

Alien: Blackout seems to get easier in the final chunk of the game compared to the opening acts. The final confrontation specifically presented an environment that made it easy to trap the xenomorph onto one side of the map and allow the humans to run around on the opposite end in relative safety. It was a stark contrast compared to earlier levels, where the creature could easily access most major sections of the environment just strolling around without necessarily using the vent system.

When I was at the early press demo for Alien: Blackout, I was discussing with one of the project leads about the difficulty. Some on the team were worried that the difficulty was too hard, where as he thought it was just right. Even though I did not beat the level once during the session after several tries, I also agreed with him. It was definitely challenging, but also totally fair. I was losing because of a myriad of reasons, usually revolving around not taking advantage of opportunities that presented themselves.

The pacing issue I mentioned earlier ties into that. My desire for a difficulty setting wasn’t so much to turn it down for the more difficult levels, it was to turn it up for some of the easier ones.

If a game is going to have one problem, make it this one. When Alien: Blackout ended, I felt like I had just completed the opening act to a larger game. I know this is a one-shot mobile title, but for once I am hopeful there is going to be an expansion DLC of some kind.

Above: Amanda … what are you playing in there? Is it any good?

Alien: Blackout is a cleverly crafted piece of work that shapes itself around the limitations of its mobile canvas, and then it takes ownership of its boundaries with uncanny confidence. As a total package, it is miles ahead of anything a straight Alien: Isolation mobile port would’ve been, and it is a strong enough concept to stand on its own as a separate game series.

So much so that I was left wanting more, which is one of the few negative things you want being said about a game. There’s a blip in the pacing towards the end, and it could help to have adjustable difficulty, but these are minor things. Alien: Blackout is an amazing hour or two of horror-puzzle entertainment. Grab a pair of headphones, cozy up in a dark corner somewhere, and toss five bucks at this game already.

Alien: Blackout is out now iOS and Android. The publisher gave us a code of the game for this review.