Tired of co-op shooters focusing on zombies? How about a game where you and up to three of your friends take on aliens instead.

Alienation is a “shoot and loot” digital download title for the PlayStation 4. It’s a cooperative four-player game where you have to shoot a horde of aliens who are trying to tear your team to pieces.

I saw the hands-on playable version of the game for the first time at a Sony event this week. Finnish developer Housemarque previously created the polished action games Resogun, Dead Nation, and Super Stardust on the PlayStation Network. It’s sort of like Left 4 Dead, but played from a different perspective. The graphics are lovely and quite colorful, much like the predecessor games. These made Housemarque famous for its explosions. In this game, instead of zombies, you’re shooting aliens. 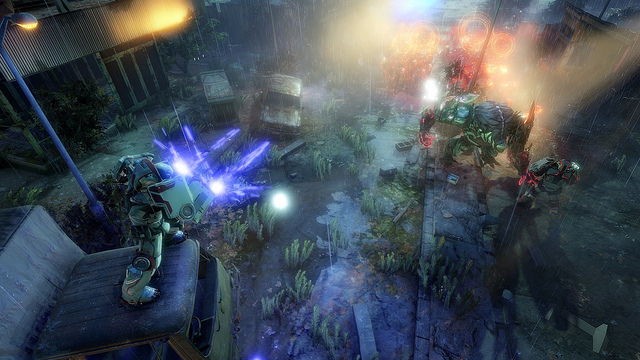 Above: Alienation from Housemarque, creator of Resogun.

Each player has a different role. I played a Tank character in the pre-alpha game. The team showed it off at Gamescom last August, but they haven’t shown it off again until now. As the Tank, I had to make sure I followed the leader and shot everything in sight. It’s a top-down 2.5D perspective. If I pressed the Share pad, I could give everyone in my group a shield. That turned out to be a lifesaver during boss fights.

Alienation uses twin-stick controls. The left stick controls movement, and the right stick is your gun direction. You fire with the R2 button, and I pretty much kept my finger there the whole time during the battle. You can toss a grenade with L2, melee with R1, and dash with L1. That comes in handy when you get cornered and have to escape. It’s quite easy to get into but hard to master.

The explosions from the grenades and other sources are quite pretty, with smoke plumes rising in the air. A lot of the environment is destructible, though not everything is. You can blow up trucks and take out a bunch of aliens. Housemarque created a proprietary engine to build the game, and this is the first time it has made a four-player game.

You shoot and collect loot until you discover the truth behind the alien invasion. Meanwhile, you can switch classes of characters, upgrade your skills, customize weapons, and compare your stats to those of other players.