Aliens: Fireteam Elite, a new survival shooter with co-op play, is coming out in North America and Europe on August 24 for PC and PlayStation and Xbox consoles. And it was my pleasure to get a taste of the Cold Iron Studios game over the past few days.

My preview focused on the beginning, where you fight in a co-op fireteam, a trio of heavy-duty Colonial Marines, to fend off the mass attacks of the creatures from all directions. It was my first hands-on since chief creative officer Matt Highison and studio head Craig Zinkievich talked about the making of the game in March.

You step into the boots of a squad of marines fighting for survival as hordes of different Xenomorphs swarm over ceilings and walls to get to you. I suited up aboard a spacecraft and customized my character. I picked my type of Colonial Marine — a Gunner at first, armed with an assault rifle, a shotgun, grenades, and a sentry gun — and started my mission. I found myself in a creepy space station, where things were too quiet.

I was playing with AI characters as my companions. I thought the graphics on these humans looked pretty pitiful at first, since they looked so fake. Then I figured out they were supposed to look fake because they were actually AI characters, with pasty android faces. It reminded me of those unsympathetic, emotionless characters from the Alien/Aliens movies. That was OK with me, as I just wanted them to revive me without having to return the favor so much for them. 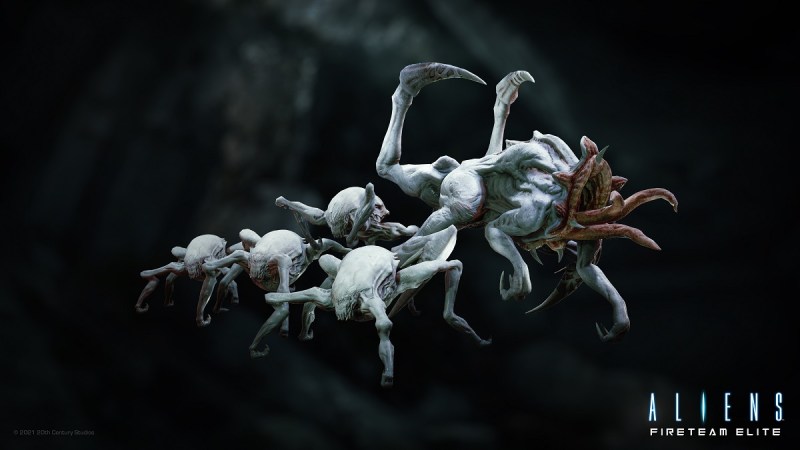 Above: An Aliens Pathogen Stalker Popper.

It’s been a while since we had a good Aliens game. Let me pause and mention why this is so long in the making. Cold Iron Studios was founded in 2015 by former creators of City of Heroes, Star Trek Online, and Neverwinter. Zinkievich started at Cryptic Studios, where he was the designer and producer of City of Heroes. He also worked on Star Trek Online and Neverwinter. The other cofounders were Highison and Shannon Posniewski. They had all worked together for 14 years.

FoxNext Games announced in January 2018 that it acquired Cold Iron Studios from the former Kabam, which was split into different parts.

Disney assumed ownership of FoxNext Games when it acquired Fox in March 2019. Then Disney sold FoxNext Games to Scopely, but that mobile game publisher said Cold Iron was not a good fit for its portfolio. So it began shopping the studio around, and Daybreak made the winning bid, acquiring it in August. The studio expanded to 48 people, a relatively small team for an ambitious console and PC title. 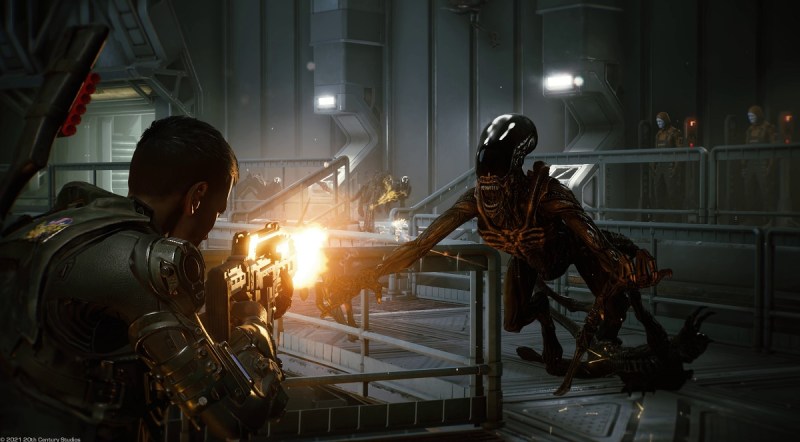 I’m thankful they got this far, and I enjoyed playing the Mature-rated game. It is the year 2202, 23 years after the original Alien trilogy. A mysterious distress call rerouted my Marine Assault Unit (aboard the UAS Endeavor) to LV-895 in the outer colonies, where deadly Xenomorph legions, hidden corporate secrets, and ancient alien ruins await my arrival. My job was to head to the Orbital Refinery Kanaga and rescue a Dr. Hoenikker.

I had to face off against waves of terrifying Xenomorph creatures with all of the nasty features that you should remember. In the first mission, I got an up-close-and-personal look at some of the 20 different enemy types. There are 11 kinds of Xenomorphs that can eviscerate marines in close quarters.

The graphics look pretty standard as far as dark space stations go, and the creatures looked more animated than highly realistic in the 4K graphics that I played the demo on with my Falcon Northwest PC. The sound was creepy in the prelude and pulse-pounding during the fighting. And it didn’t take long at all before things got hot. The early encounters were easy and they got progressively harder. 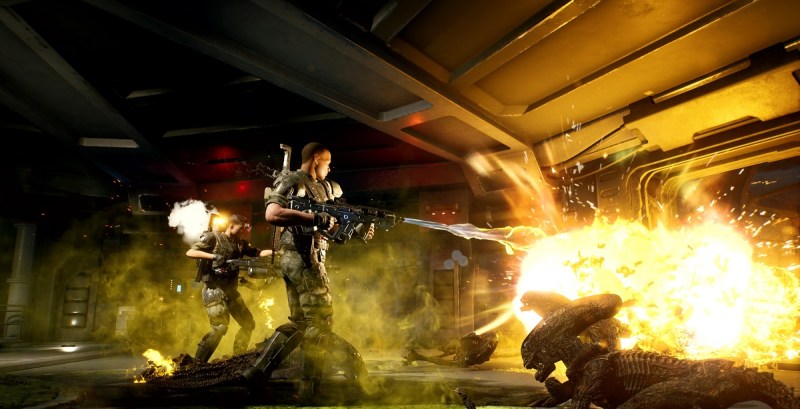 Above: You can use a flamethrower against acid spitters in fierce firefights in Aliens: Fireteam Elite.

The unfair thing about the Xenomorphs is that they swarm through doors and vents, scramble across walls and ceilings, and strike from darkness and all directions.

In my first run in the Gunner mission, I got pretty far into the mission and was proud of myself. I fell and my two comrades went down in the final part of the battle, when wave after wave of Xenomorphs charged in and overwhelmed us as we were about to make our escape through an elevator. My Sentry Gun was extremely useful in the middle of the room, automatically gunning down creatures until they took it out. (You can get more of these consumable devices with each round of experience you get).

Everything seemed fine and under control until these big guys came in and did damage to my comrades. That put a lot of pressure on me, and again everything was OK until it wasn’t, and I was down with no others to revive me. 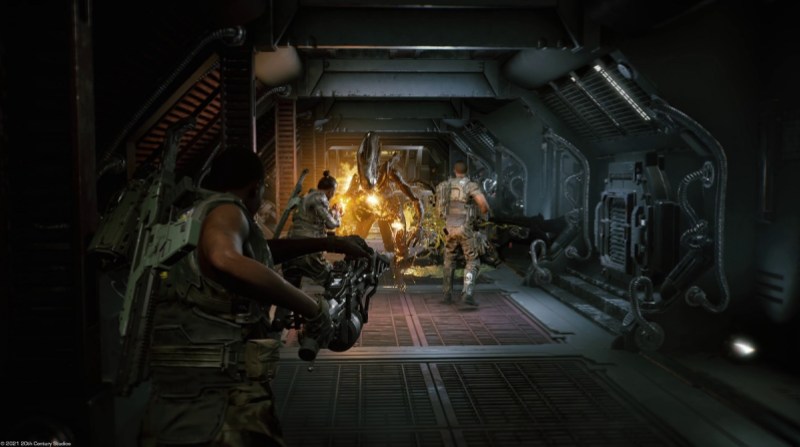 Above: Aliens: Fireteam is full of intense firefights with xenomorphs.

I repeated my mission, listened to my communications specialist crack some of the same jokes again, and tried out the Doc character, mostly by accident. The Doc carried some healing devices as well as an ability to rearm everyone with ammo. I had a standard assault rifle, but my second weapon was just a weak pistol.

I battle through some of the same corridors again, but the Xenomorphs came in very different waves and took different paths to get to me. I positioned myself near my two comrades but tried to stay out of their line of fire at the same time, and that wasn’t easy. I found that I did better focusing my fire on one spot and letting the Xenomorphs come running to it. They impaled themselves on my bullets.

I had to keep turning around to make sure they weren’t sneaking up on me, but eventually, I found I could focus my fire again. I had to make sure that I always took advantage of my rearming and healing powerups. And this time I stayed close to the elevator door and let the Xenomorphs run to me. You can also use tactics like being extremely mobile as well.

I was feeling like the firefight at the end was pretty intense, but was surprised I survived it. I actually just backed up a bit into the elevator and realized I could escape the final creatures just by escaping into the elevator.

I think the heavily armed Demolisher (a tank character) is one of the most satisfying folks to play, but a good mix is necessary to survive any firefight. I’m looking forward to playing with fellow humans. The game was pretty stable for me, and it didn’t quit in the middle of a firefight, which would have been very annoying. I didn’t get nearly as far as I wanted to yet, but I’m willing to get back to it.