Allstar has raised $3.85 million so that gamers can share snackable game video highlights.

The New York-based company’s mission is to democratize the creation of game content, so that anyone can be a YouTube star. The platform helps casual gamers and rising competitive esports players alike share their biggest highlights with a growing network of supportive users, as well as organizations or coaching staffs.

The raise comes at a good time for Allstar and the broader gaming video ecosystem, which is growing dramatically. In the last eight months alone, Allstar’s user base has grown more than 10 times and driven close to 200 million impressions.

The funding will help Allstar enhance the company’s current product offering, integrate new titles onto its growing platform, and expand its hiring and partnership efforts.

CEO Nick Cuomo is a former creator himself, and he said in a statement he knows how hard it is to make great content and break out and be recognized for it. The company will now invest the money to give all gamers access to tech that makes it easier to make, share, and watch content.

While recent studies show that more than a billion people consume gaming-related content, less than 3% of gamers actually produce their own creative. Allstar aims to “flip the pyramid” of gaming content to empower all gamers to become content creators. By focusing on activating this audience, the company seeks to unlock the untapped potential in the wide-scale adoption of user-generated gaming content. 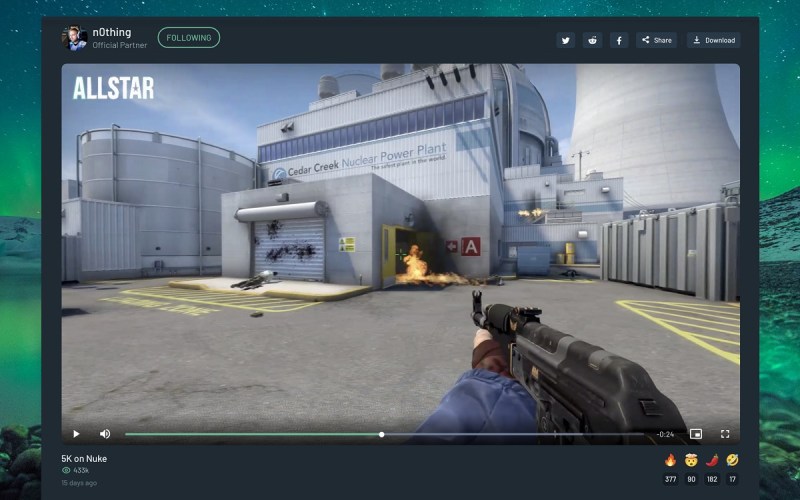 Above: Allstar uses the cloud to simplify capturing game highlights.

The company’s cloud technology provides an alternative to costly PC hardware and unintuitive software that can be burdensome to users and negatively impact gameplay. Beyond its own network, Allstar’s creative automation technology integrates with platforms like Discord, making sharing with friends and prospective followers frictionless. The company recently announced a partnership with TikTok, allowing users of the immersive platform to sign directly into Allstar via their TikTok credentials.

Allstar has automated the way great content gets made. Its proprietary cloud-based technology enables Allstar to integrate directly into games, enabling it to control the end-to-end content creation process. Allstar offloads game data to playback gameplay to its cloud machines. This eliminates any burden on the users PC (no frames per second drop, minimal bandwidth usage, little to no disk space usage).

While most solutions record the users screen (what you see is what you get, severe performance impact, low quality) ,Allstar grabs and plays back demo or replay files at the highest possible graphics quality settings, fine tuned by professional creators to maximize quality and offer cinematic content. It’s similar to recording a song off the radio. You could hold your phone up and get an OK quality reproduction, or you could take the sheet music, and play it back on an orchestra, to produce an even better version than the original.

Allstar is testing the next generation of its creative automation technology, putting powerful creative tools in the hands of all gamers, enabling them to enhance the quality of their content in a fun, easy and accessible manner never before available to aspiring creators. 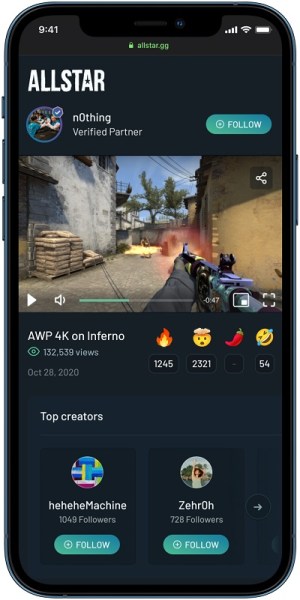 Allstar had previously raised $425,000 of pre-seed capital in December 2019. Notable entrepreneur and media proprietor Mark Cuban contributed to the investment. The company has raised a total of $4.2 million in venture funding to date.

Cuomo, a former pro gamer, started the company in August 2019 with chief technology officer Gavin Silver. The company has 14 people and is hiring.

The company doesn’t disclose detailed user data. However, it has grown from a dozen creators in March 2020 to thousands of content creators who each month produce tens of thousands of clips and earn millions of views across Allstar and connected social platforms. The company recently brought pro gamer and avid streamer Jordan “n0thing” Gilbert into the Allstar family as an official partner.

Long term, Allstar wants to become the household name in snackable gaming content, serving as the infrastructure/enablement layer to put the power of professional content creation capabilities in the hands of casual/everyday gamers. It wants to support game publishers, esports organizations, and gamer-focused brands to activate their fans and users through their own user-generated content, helping spread awareness via bite-sized sharable gaming moments.