Whenever I am invited to preview a sequel to a classic game series, I feel less like a member of the press and more like a “franchise psychiatrist” making a house call.

The patients all share the same problem: a mid-life identity crisis.

These poor old souls are trying to adjust to a world that has changed considerably since their peak. They’re struggling to retain their unique gameplay identity while doing something new. Different. Exciting. Relevant.

Speaking in shorthand, they’re looking for their Castlevania: Symphony of the Night moment.

My most recent house call took place in downtown San Francisco, where I was to meet the subject’s caregivers, Atari and Pure FPS. The patient’s name? Alone in the Dark: Illumination. A series that has lived a bitter life in the shadows of other well-known Japanese horror titles. When I consider that the original Alone in the Dark‘s camera system and gameplay design inspired Capcom’s Resident Evil, I can forgive it if it is holding a grudge against the world.

Where Resident Evil was able to break from the ’90s era static camera and reinvent itself successfully in 2004 with Resident Evil 4, Alone in the Dark has had a harder time finding itself in the millennial era. Can Pure FPS administer a treatment that will cure what ails this franchise? 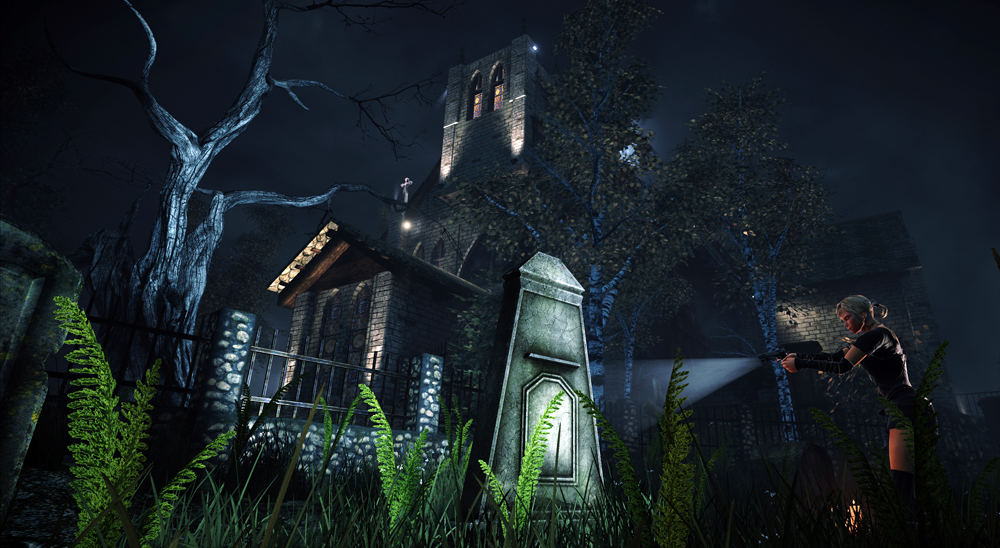 Above: I realize this is an odd way to visit my grandma’s grave, but I’m sure she would’ve wanted it this way. Grave surrounded by weeds. Reminiscing under the majestic glow of a flashlight. Gun pointed threateningly at her head stone. We miss you nana.

A twinkle of Alone in the Dark’s original identity still lurks in the eyes of Illumination. The main character is a direct descendant of the original’s protagonist, private investigator Edward Carnby. The premise is still about investigating the invasion of Cthulhu horrors.

The gameplay also retains its roots in survival and discovery. In this case, discovery as in finding solutions to environmental puzzles that are routine for the genre. Surviving, in that you still need to gun down monsters while wisely maintaining a healthy stock of limited supplies in an inventory system.

The similarities begin to fade, however, beyond this point. Alone in the Dark is, after all, ready to grow into a new chapter of its life.

It’s ‘Illumination,’ after all 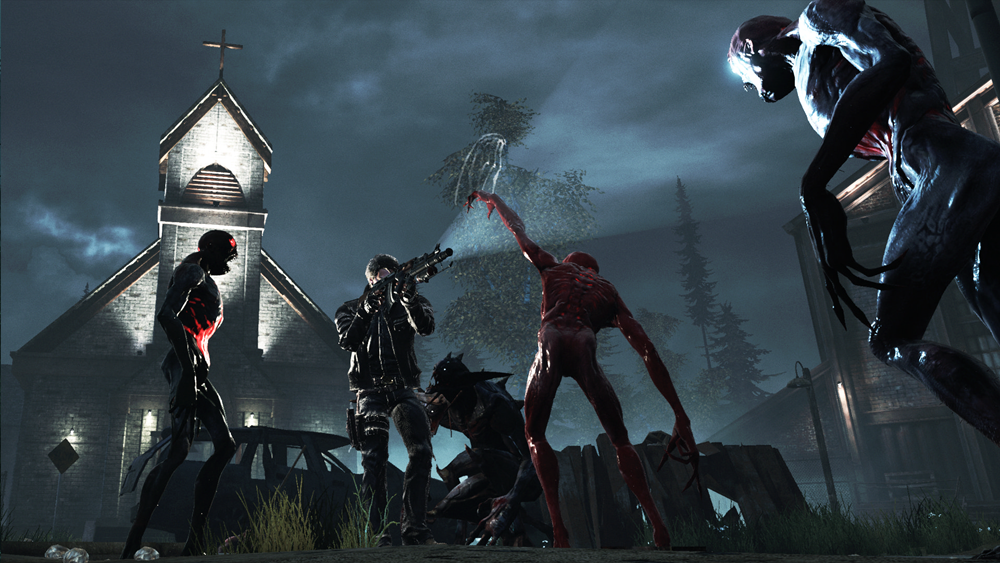 Above: No one told me Church Ave. was sketchy. Google Maps street view fails me again.

As the title obviously hints, one of Illumination’s key gameplay mechanics surrounds the use of light. Darkness is like PCP to Cthulhu’s underlings, making them ferocious adversaries in shadowy alley ways.

When these creatures are caught in the light, on the other hand, they become incredibly weak. Lighting up a beast is like bathing them in kryptonite. As long as these guys are basking in the glow of a light source, they become easy targets to take down.

The demo provided a lot of different ways to illuminate these monsters. The obvious and direct tactic is to shine a flashlight at them. The thing is, the flashlight only works on a maximum of one, maybe two (if the angle is right) targets at the same time. These creatures enjoy attacking in packs, so it was not ideal to rely just on that technique for the majority of the play session. 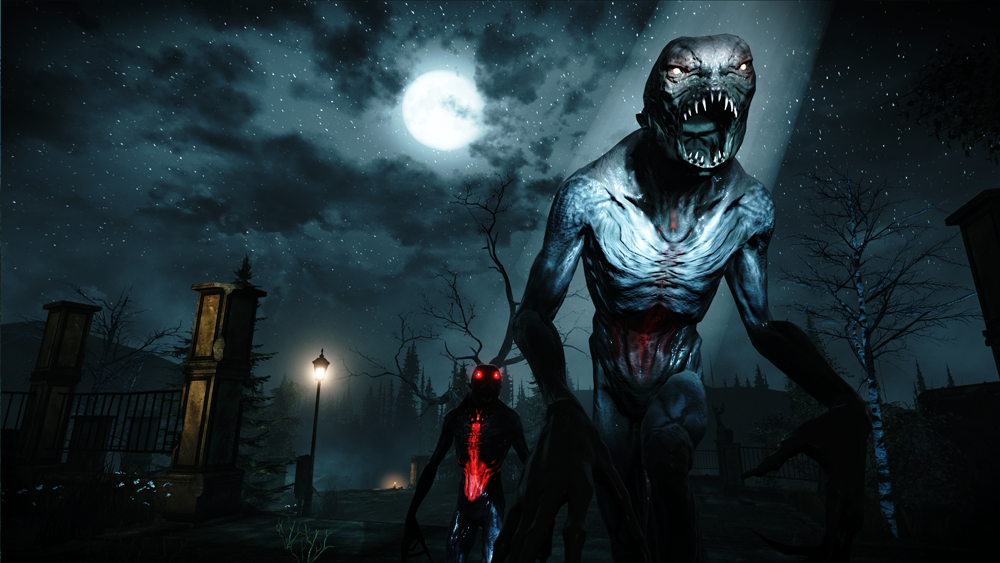 Above: For once I’m okay with being upstaged. You go ahead and hog the spotlight.

You also have a flamethrower which, again, only works on one or two targets at a time. It’s benefit is that you get a two-for-one deal, in that you’re illuminating and killing creatures at the same time. It also had the downside of being a close-to-mid range weapon.

The safest tactic is to switch on different types of environmental illumination. Such as street lamps, trash bin fires, and flood lights. Then mow down the lit monsters with a firearm from a distance.

Although these light sources may be simple to turn on, keeping them functional is a challenge. Like a father being pissed off about someone leaving the bathroom light on, some of the attacking mob will break off and concentrate on destroying lights you’ve activated. Once a light source is destroyed, it can not be turned back on under normal means (and under the right conditions, at all).

I quickly wised up and decided to not activate every switch I came across, just in case I had to backtrack through the same area later and would need some working lights.

You’re not so alone in the dark Above: How about, “Give us this day, our daily DEAD!”… no? Okay. You think of a better one-liner.

Managing lights, solving environmental puzzles, and shoo’ing off hordes of demons is something you don’t have to multitask alone. Pure FPS is dragging Alone in the Dark into modern times by introducing the franchise’s first multiplayer experience. It’s purely cooperative and is heavily tied into single player progression.

Pure FPS is also introducing four character classes that have their own experience point based level system. How that will work was not discussed in detail, but  players may be able to unlock visual pieces of flair to make their characters distinguishable.

The default class, and the main character in this version of the demo, is the Hunter. he has all the trappings of your typical “survival horror” hero. Hunters can us a variety of fire arms and the majority of items. He otherwise has no special abilities and is considered the all around base class design for the game.

His companion is the Witch. She can handle small firearms and has the power to manipulate lightning, which comes in handy for clearing out waves of monsters. 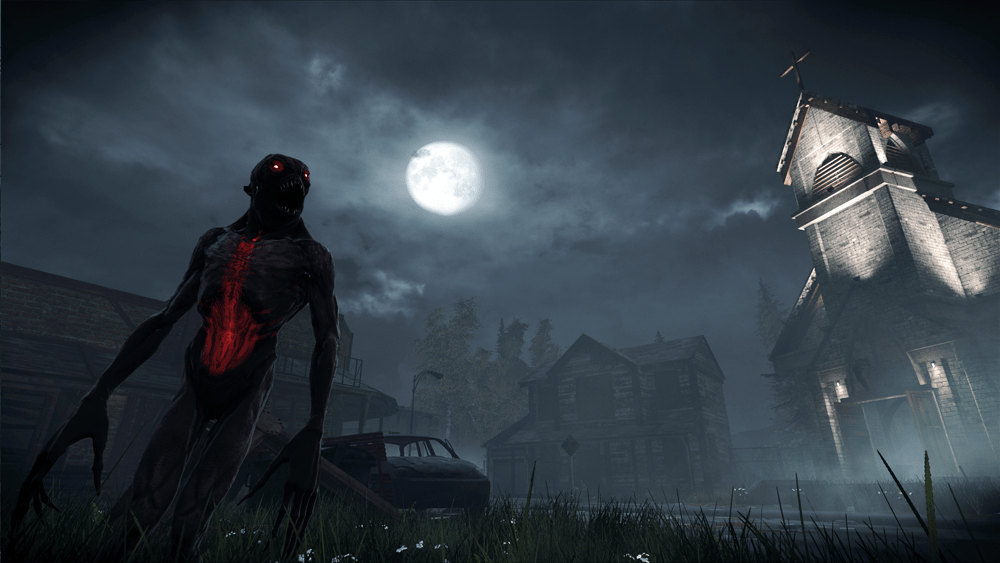 Above: I tell yah. Only on a full moon.

Similar to the Witch is a Priest class. His super natural powers are geared more towards creating holy illumination. Obviously, this is going to be a very useful class to have in your party.

Finally, you have the Engineer. She brings to the group some heavy weaponry and the ability to repair light sources that have been smashed by Cthulhu’s beasts.As much as this all sounds fairly typical for a modern game, cooperative multiplayer play is a huge departure from the traditionally intimate Alone in the Dark experience.

Rogue in the dark 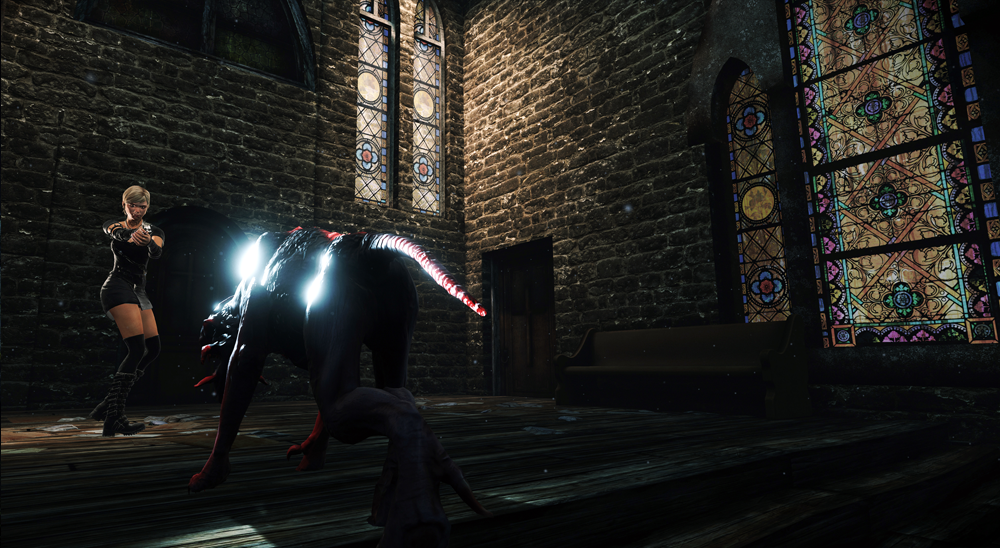 Above: That’s a very moist, glistening…uhm…whatever that is.

Out of all the baby steps Illumination is taking to evolve Alone in the Dark, its philosophy on level structure is the most interesting. The puzzles and objectives I played in the demo were linear and familiar. I had to go collect item X over there, then track to important switch Y to turn something on, so I can then walk through door Z.

What isn’t so cliche is the level design. Pure FPS is going for a procedural structure with Illumination. Every time you launch a new campaign or reload a level, the environment’s layout changes.

Important puzzles will remain the same, but will be placed in different coordinates on the map. Items will be shuffled and redistributed in random spots. Doors that were open last time may be locked (if even in the same spot). Enemy spawns will also generate in different areas.

I was told that save points are also taking on a rogue-like nature, in that they rarely, if at all, exist within levels. Pure FPS is toying with the idea that death should be a severe punishment. Not just a minor set back. 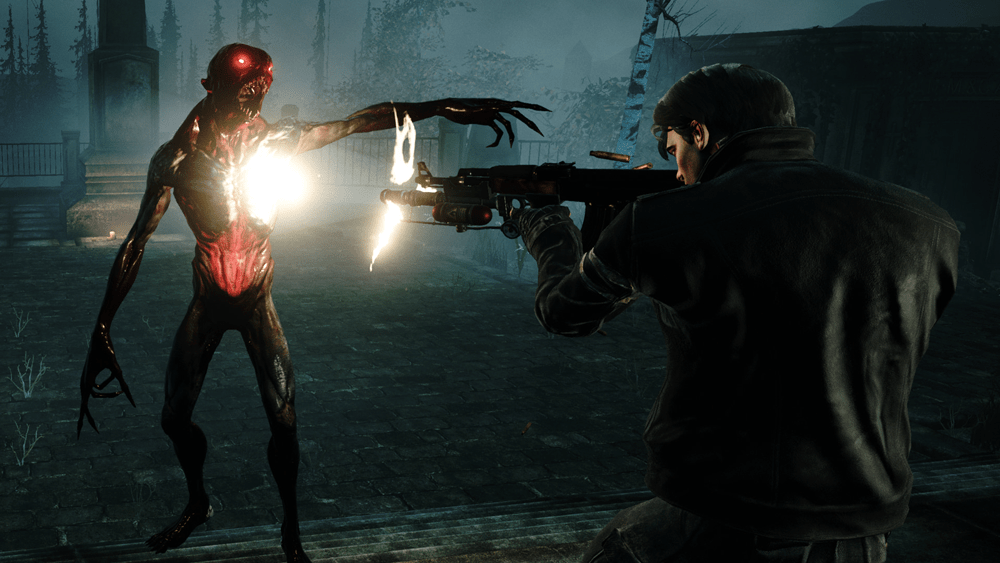 Above: Oh no, man. Wrong street. You want Church Blvd., not Church Ave. It’s that way.

I’ll give Illumination this: compared to the typical franchise revival I see, the new ideas Pure FPS is proposing fit the theme of the franchise well.

They are radical, though. Going from a single player adventure to a multiplayer rogue-like experience is a big departure. We’re talking video games here, so someone on the Internet is going to get ridiculously pissed off over these changes. That person, for better or worse, is going to have to deal with it. The series needs change.

Although I like what is being pushed, what was presented to me feels like a light sketch. These ideas seem like they need to be pushed a bit further. For all I know, Pure FPS and Atari have been. What I saw may be just a glimpse of what they are really doing. At least, that’s the way they were making it sound during our discussion.

Atari is releasing Alone in the Dark: Illumination on PC (Steam) in this winter. GamesBeat was given a private demonstration of the game. When it comes to game franchises entering their mid-life identity crisis, Stephen prescribes purchasing red sports cars and dating people half their age.