♀Amazon is announcing a number of improvements to its Android game ecosystem that will benefit both players and game developers. It means that players won’t lose their data when switching between devices.

The effort is part of a wider plan to become the go-to service for mobile gamers. Specifically, Amazon is now extending its GameCircle achievements and leaderboards to iOS. It is also bringing its cloud save and analytics technology, Whispersync for Games, to Apple’s game platform.

The technology improvements are impressive, but they’re a bit complicated. So bear with us as we explain what this means.

Jason Chein, director of game services at Amazon, said in an interview with GamesBeat that consumers have consistently asked for features that allow them to play on Amazon platforms such as the Kindle as well as on devices like the iPad and iPhone. To comply with those requests, Amazon had to do a lot of engineering for its cloud services, Chein said.

“This is a difficult technology problem to solve, but it shows that we think and build for a cross-platform solution,” Chein said. 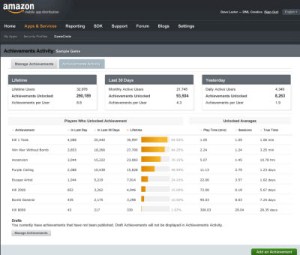 Amazon introduced GameCircle to its Kindle devices in the fall of 2012. It added GameCircle support for Android devices this summer. And now it is adding GameCircle to iOS devices too. Developers who integrate GameCircle achievements can also get access to better analytics, dubbed Achievement Reports. These reports tell the developer how many achievements players are reaching, where they stop playing, and other data that can be used to either monetize or change the game.

Both GameCircle and Whispersync provide a lot of benefits for users, but they’re very hard for developers to create on their own. So Amazon creates the platform and saves the data to the Amazon Web Services cloud so that developers don’t have to worry about it.

“They can concentrate on making their games,” Chein said. “We bring them true data portability, and we do it without adding work for the developers.”

In this sense, Amazon is embracing the cross-platform capability for social services as proposed by Peter Relan’s OpenKit platform. The difference is that OpenKit doesn’t want developers locked into just one platform.

The service is important because people who use GameCircle stick around longer playing games than players who don’t use it. A player can complete a game on a Kindle Fire, switch to an iPhone, and pick up where they left off. Amazon has integrated GameCircle into its own games such as Air Patriots on the Kindle Fire, Android, and iOS. Game data is synchronized seamlessly.

“If customers get a new device, and they use multiple devices, then this is great for them,” Chein said. “It’s better if data is shared across all platforms. When customers go from one device to another, we often see frustration and friction. It becomes a point of churn,” or possibly losing a customer.

Sourabh Ahuja, vice president of Android development at Glu Mobile, said, “Amazon’s Whispersync service is one of the most effective cloud save services available on mobile platforms. Its ease-of-use, auto-conflict resolution and intuitive design save time and require little custom development. We simply set up our variables and Whispersync handles the rest.”

GameCircle supports iOS 5.0 and up. Developers such as Driftwood Software have done the integration work for iOS.