The term “game publisher” probably elicits thoughts of Nintendo with its stable of beloved characters or Activision’s massive releases like Call of Duty and Destiny. Soon, however, that phrase may make you think of Amazon instead.

While the company is best known as an online retailer that specializes in carrying an unbelievable variety of products, it is planning a future in media production. And the medium it seems most interested in right now is gaming. Amazon has made a number of moves, acquisitions, and hires over the last few years that emphasize its desire to enter the gaming market — and it makes sense. We’re talking about a multibillion-dollar industry on consoles, on PC, and on mobile. As one of the top retail outlets in the world, Amazon has an idea of what the biggest titles pull in, and it likely realizes that it can break into the market and establish a strong new revenue stream by only spending a billion dollars here or there.

How Amazon has quietly built an interactive-media business

Anyone who has paid close attention to Amazon has probably noticed that it is getting serious about games. In late August, the company made a $970 million acquisition that caught the attention of just about everybody.

The retailer now owns gameplay video-streaming site Twitch, which has 60 million viewers and over 1 million people broadcasting their gaming. As we’ve point out previously, this will bolster Amazon as a media company, which will in turn help it compete with Google and Apple.

But this is just Amazon’s latest and largest move into gaming. The company has made acquisitions, hired developers, and formed gaming studios in the background while creating its own shooter, releasing a microconsole, and running an app store out in plain sight.

Let’s take a look at some of the other pieces of Amazon’s new business in an effort to make sense of what it might have planned for the future.

In April, Amazon released the $100 Fire TV, which is an Android-based microconsole. It can stream movies and music from Amazon Instant Video or Netflix to your television, but it also is capable of running Android software. And for an extra $40, you can get a full joypad controller with two thumb sticks and plenty of Xbox- and PlayStation-style buttons.

Above: Sev Zero from Amazon Game Studios for the Fire TV microconsole.

In July, Amazon released the Fire Phone, which is an AT&T smartphone that is a lot like the Apple or Samsung device you’re probably already carrying around. Then we have Kindle Fire tablets, which Amazon has sold for years.

The reason Amazon is selling a phone, tablet, and microconsole is to control the platforms through which people buy movies, music, and games. And the latter is perhaps the most important of the three. On the iOS App Store and Google Play, games make more money than any other app category. A quick glance at the top-grossing apps on Google Play reveals that nearly every entry in the top 100 is a game.

Interactive entertainment doesn’t just drive revenue for platform holders, but a strong gaming ecosystem can also affect which platform a consumer ends up choosing. If Kindle Fire has a strong lineup of playable releases, then that may convince its owners to go with Fire Phone and Fire TV down the line.

The Amazon Appstore and partner publishing

One of the big reasons Amazon will benefit from selling more Fire hardware is because of its Appstore platform. Like Android’s Google Play market and Apple’s iTunes App Store, Amazon takes a slice of every movie, music, and software purchased through its devices. The more people using Fire TV or Fire Phone, the greater the revenue potential for the Appstore.

But the Amazon Appstore actually predates any of the company’s Fire hardware.

In March 2011, Amazon announced that it was opening its own digital market for Android-compatible smartphone and tablet apps. The company encouraged Android diehards to install its storefront on their non-Amazon devices by offering a free download every day. By September 2011, Amazon launched the Kindle Fire with an app store that was had plenty to offer on day one.

The retail giant is taking its relationships with developers a step further. In addition to offering a platform for developers to release their Android games, Amazon has actually partnered up with studios to directly publish their projects.

The best example for this is the recent launch of Fire Phone. For the release of that device, Amazon wanted games that really showed off some of its special features — like the “dynamic perspective” that creates a quasi-3D effect using camera tricks. Leading up to its release, the company formed deals with a handful of developers to publish their work under the Amazon Game Studios (AGS) label.

Developer HotGen worked directly with Amazon to release To-Fu Fury, a puzzle game centered around a block of bean curd, on the Fire Phone when it debuted. Amazon did the same with developer Hibernum Creations and its turn-based strategy-puzzler Saber’s Edge.

Both of those titles are exclusive to Fire Phone, and both open with the Amazon Game Studios logo when you start them up.

While it hasn’t had a prolific output, Amazon Game Studios is still a substantial developer. It has a ton of talent that could start turning out a lot more in the future.

In April, Amazon hired Kim Swift (designer of the famous Portal puzzle game) and Clint Hocking (director of the big-budget Far Cry 2 shooter), and the pair are working as senior designers at the studio. In February, Amazon acquired developer Double Helix, which produced the popular Killer Instinct fighting game for Microsoft’s Xbox One console.

Swift, Hocking, and Double Helix all joined an Amazon Game Studios that already comprised a number of industry veterans — many of whom came from Wizards of the Coast, publisher of the collectible-card game Magic: The Gathering.

Amazon has the hardware, the platform, and the software. But is it sure about entering a market dominated by Sony, King, and others?

“We’re definitely serious about games,” AGS head Ian Vogel told GamesBeat in July. “A lot of people are paying attention now that weren’t aware of us. We’ve invested in some great talent at our internal studios. We have three studios now doing first-party games, as well as a publishing arm.” 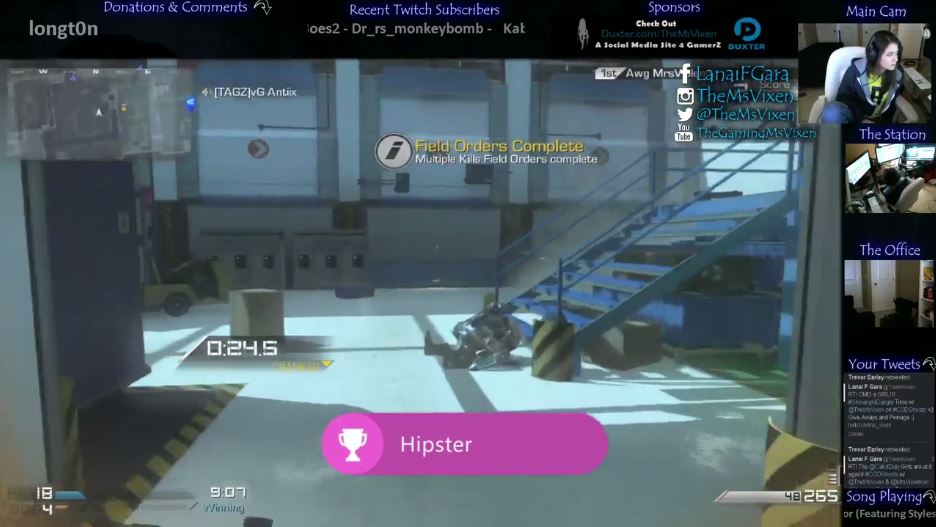 Above: Twitch on the Xbox One.

With Twitch on top of all of that, Amazon could start making a big impact soon. And while the company acknowledges that gaming can’t quite match its gigantic e-commerce business, the studio’s bosses also seem excited about its money-earning potential.

“Games are the most engaging and in-demand, by percentage of time used, among any digital content categories,” said Amazon Appstore vice president Ethan Evans. “When we look at games, we see an industry where blockbuster games out-earn blockbuster movies. The total sales in games, I believe, is bigger than all online movie sales and online music. True, it’s not the size of our global retail business today, but we see that potential and that reach.”

Obviously, Amazon has supersized dollars signs in its eyes, and it sees creating content as an important part of capturing that money.