Available to download in beta today, Lumberyard is a particularly notable move from the Internet giant, as it sees Amazon go up against a number of long-standing incumbents in the game-engine realm, including Unity and Epic Games’ Unreal Engine, not to mention more recent entrants such as Autodesk’s Stingray.

But, of course, Amazon has clout, mindshare, and the computing might of AWS on its side. It’s also worth remembering that Amazon has been aligning itself with the gaming world for a while — back in 2011, for example, Amazon opened an Android-based app store with thousands of games and apps. The following year, it launched the first fruits from its own game studio, Amazon Game Studios, before going on to acquire Killer Instinct-developer Double Helix Games. It then snapped up livestreaming game company Twitch for $1 billion almost two years ago. Lumberyard will be integrated directly with Amazon’s Twitch video platform and associated community.

Indeed, Lumberyard will harness two new Twitch integration features — there’s ChatPlay, which allows games to respond to keywords in a Twitch chat stream, enabling a truly social, collaborative gaming experience. Then there’s JoinIn, which lets broadcasters invite an audience member into the game from within a chat channel.

“Many of the world’s most popular games are powered by AWS’s technology infrastructure platform,” said Mike Frazzini, vice president of Amazon Games. “When we’ve talked to game developers, they’ve asked for a game engine with the power and capability of leading commercial engines, but that’s significantly less expensive, and deeply integrated with AWS for the back-end and Twitch for the gamer community.”

The final piece of the Lumberyard puzzle can likely be traced back to last summer, when Amazon reportedly paid upwards of $50 million for a licensing deal with struggling game-engine company Crytek and its proprietary CryEngine technology. Amazon has confirmed that Lumberyard is, in fact, a “blend of new and proven technologies from CryEngine, Double Helix, and AWS.” And with Twitch thrown into the cauldron, it becomes clear that Amazon has been pushing in this direction for a while.

Amazon Lumberyard will initially only support Windows Vista and Windows 7, 8, and 10, as well as PlayStation 4 and Xbox One. Mobile devices and virtual reality (VR) headsets will be added within a few months. As an aside, Unity is actually hosting a VR event of its own this week, in partnership with big names such as Oculus, Microsoft, Google, Sony, and Steam. There’s no sign of Amazon, however.

As for Amazon GameLift, well, this can work in conjunction with Lumberyard, and it lets developers scale their session-based multiplayer so it can be played by millions of people. 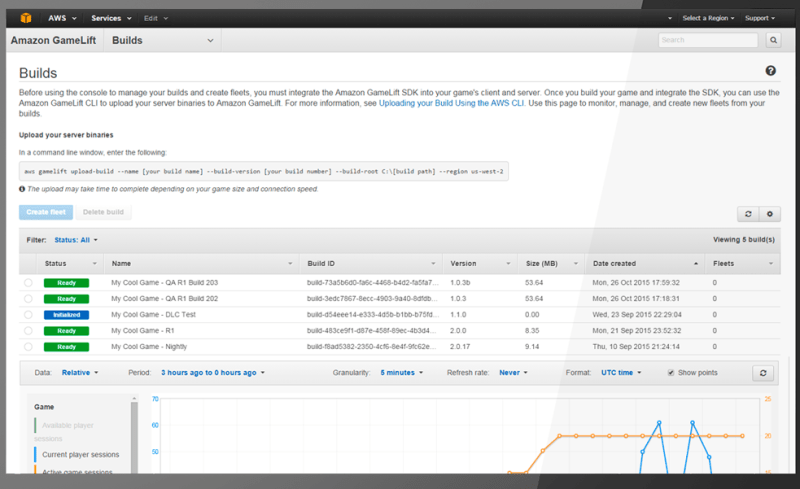 The key selling point here is the same as for any cloud computing service — it’s elastic, meaning it allocates only the necessary server capacity for the number of people playing at any given time. And this is how Amazon wants to monetize gamers — a fee is attached for each daily active user (DAU), as well as the usual costs attached to Amazon’s EC2 cloud computing service.

So while Lumberyard itself is free, it’s being used as the “hook” to get developers on board and paying for the associated AWS services. It’s an obvious but smart move from Amazon.

It’s notable that Amazon is giving away its engine to developers, as this puts real pressure on the likes of Unity. That said, it’s not always easy to get game developers to switch to a different gaming engine — as with all devs, they have their well-honed ways of working. So it will be interesting to see what kind of uptake Lumberyard garners.