Some of the biggest corporations in the world are starting a second video game console war, and it’s one that most people don’t seem to care about.

Today, Google introduced its Android TV platform at its Google I/O developer conference in San Francisco. This isn’t one specific device — it is instead a version of the Android operating system that Google built to work with televisions. Android TV devices will play movies and shows, but they’ll also act as gaming devices. That puts Google’s new platform in direct competition with Amazon’s Fire TV in a living-room gaming battle that probably won’t have most people looking away from their triple-A PlayStation 4 games.

As with standard Android, third-party vendors can take this software, integrate it into their device, and sell it. That means gadget companies like Razer, Asus, and more will soon introduce Android TV set-top boxes. It also means that television manufacturers, like Sony, will integrate the OS directly into TV sets. For consumers, this provides a way to search the Internet with the TV, access Android apps, and play games.

This fight is mostly about providing the service that sells television content. Most people spend hours every day in front of the TV, and Amazon, Google, and Apple want a slice of the money when people go to rent or buy television shows and movies. All three companies have huge libraries of thousands of shows and movies, but most people don’t want to invest in an ecosystem just for their phone or tablet. Bringing Android to the TV may convince some people to start looking to the Google Play store for more of their entertainment, and that include games.

Google is hoping to set Android TV apart by including its powerful search tools, which makes perfect sense. You see an actor in a show and Android TV can tell you their name.

While movies, TV, and search all fit with television, the games part of Android TV doesn’t make as much sense. As with microconsoles like Ouya and Gamestick and Fire TV, Android TV will once again bring what are essentially mobile games to the big screen in the family room. Even though these devices are all relatively inexpensive (Fire TV with a game controller is $140), most people don’t seem to care.

Gamers love their mobile games on a smartphone and a tablet, but when they get home, the TV is for premium experiences on an Xbox One or PlayStation 4.

So, why even include games?

Amazon and Google now have Apple TV competitors, and both support gaming. One of the big reasons for that is because Android already has that functionality, and it works well with multiple input devices. It’s almost easier to include gaming than to come up with some reason not to.

Of course, the other big reason Amazon and Google want games in their television strategies is because of the money. Games generate more revenue on mobile than any other kind of content. Free-to-play hits like Candy Crush Saga made nearly $1 billion last year. Gamers spent nearly $16 billion on mobile games in 2013.

Maybe the audience that is dropping cash on mobile will want similar experiences on the TV, and maybe they’d pay for a device that runs Android TV. We haven’t seen that play out yet, and the market is already getting crowded if you count the Android-based microconsoles like Ouya, Gamestick, and Nvidia Shield as well.

Is Fire TV or Android TV better for games?

For now, if you want a connected television experience that also plays games, your best option for that is Fire TV or Android TV. These two options are pretty similar with a few differences.

Fire TV and Android TV both run Android games. The big difference is that Fire TV pulls content from the Amazon App Store, which has fewer games than the proper Google Play market on Android. With Android TV, you can access and play the games you may already own for your Galaxy S5 or HTC One.

The other obvious difference is that Fire TV comes in one microconsole design where Android TV will come in a variety of shapes and sizes. For the Amazon, that means you know what you’re going to get, but you also won’t have any choice. For Google, you may have to do more research, but you may get a product that better fits your situation.

For example, Sony is going to include Android TV built into all of its 2015 televisions. If you’re in the market for a new set, you can just get that and have access to Android games without anything extra lying around your entertainment center. On the other hand, the gaming-hardware experts at Razer are making their own microconsole based on Android TV. This may come with top-of-the-line components and a controller that feels great.

Razer is certainly already talking big: “This is a console of the future,” chief executive Min-Liang Tan said in a statement. “Built on Google’s incredible Android TV platform, the Razer microconsole incorporates not only hardcore and casual gaming, but music, movies and other entertainment and social applications, all on an affordable system.”

Razer isn’t talking specifics about the price, but it did release a photo. It kinda looks like a Fire TV: 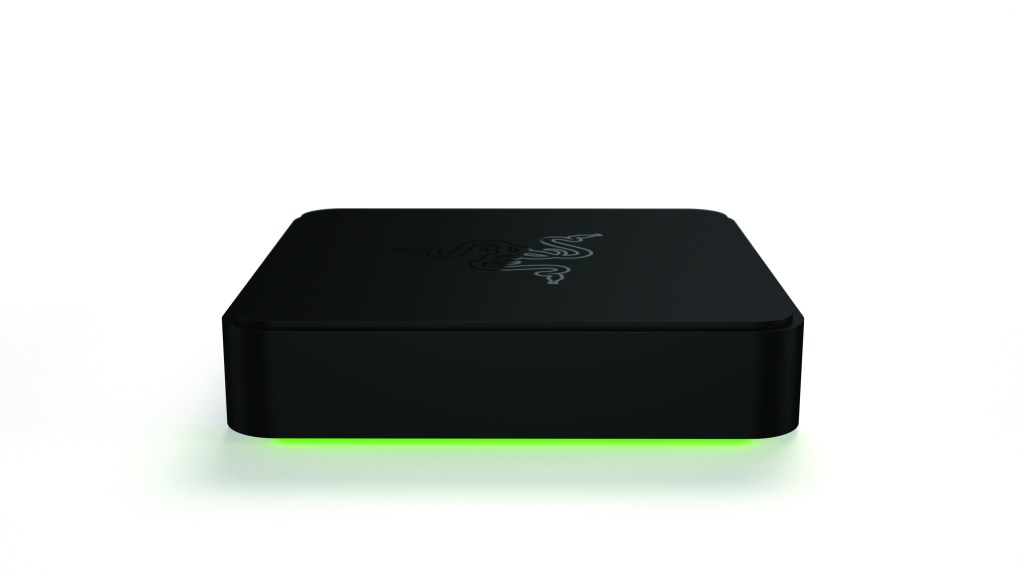 Above: The Razer microconsole.

Of course, having a bunch of options isn’t always a good thing.

“Given that Android TV will be initially available only to those with supported sets — and high-end ones at that — widespread adoption of the platform may not materialize as quickly as experienced with Android smartphones and tablets or Apple TV boxes,” said Sebastian.

In the end, all this stuff kinda doesn’t matter. What does is how well Android TV and Fire TV play games. We can answer that right now for Amazon’s box: It does an OK job with gaming on the television, but its library is what sticks out. Phone games aren’t exciting in the living room, and even the stuff built from the ground up — like Amazon’s own Sev Zero — kinda just feels like an off-brand generic version of the “real games” you would find on an Xbox or PlayStation.

But hey, your kids will have something else to play Minecraft on.